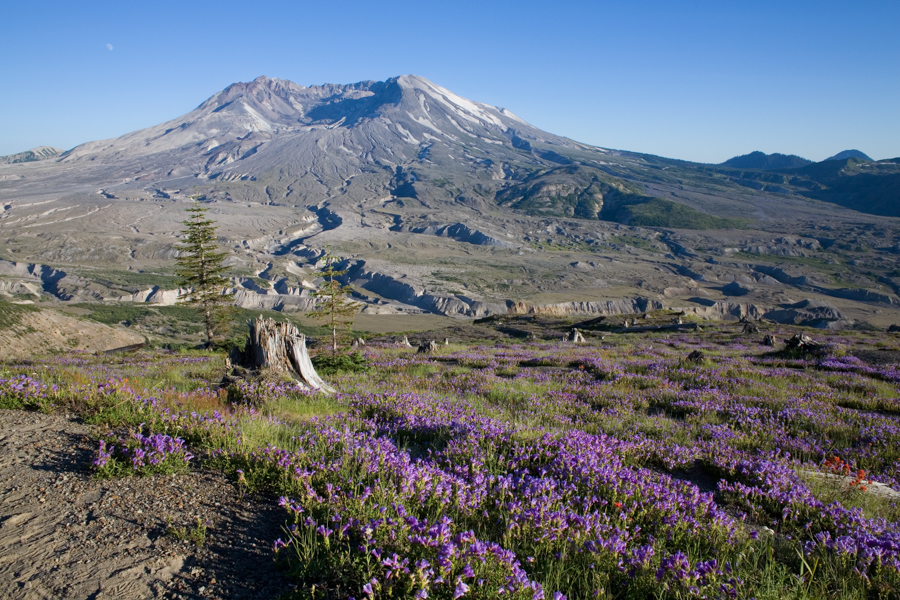 When Mount Saint Helens erupted in May of 1980, it lost 1,300 feet of elevation and gained a new mile-wide crater. The debris avalanche and ashfall from the volcanic blast devastated the mountain and its surroundings, crushing, burning, killing, and coating everything in ash. Everyone assumed life could return to this apocalyptic death-zone only very slowly, maybe over several human lifetimes.

Instead, forty years later, the mountain sides are lushly covered with grasses, prairie lupines, alders. Critters scamper, streams flow. It will take maybe 500 more years to return to old growth forest. But still. Why did life come back with such vigor, and so quickly? As Kathleen Dean Moore explains in her book Great Tide Rising:

“What the scientists know now, but didn’t understand then, is that when the mountain blasted ash and rock across the landscape, the devastation passed over some small places hidden in the lee of rocks and trees. Here, a bed of moss and deer fern under a rotting log. There, under a boulder, a patch of pearly everlasting and the tunnel of a vole’s musty nest.”

These little pockets of safety are called refugia. They are tiny coverts where life hides from destruction, secret shelters out of which new life emerges.

This week the United Nations released a report that the New York Times described as “the most exhaustive look yet at the decline in biodiversity across the globe and the dangers that creates for human civilization.” You can read a summary of the report here. Its conclusions—based on thousands of studies compiled by a huge international team of scientists—are terrifying. We have known that species extinction is occurring at something like one thousand times the “background rate,” but this report affirms that the pace is accelerating. This is not just about waving a regretful goodbye to a few decoratively rare species of owls or butterflies. This is about ecosystem collapse.

Psalm 150 concludes with an exuberant flourish: “Let everything that has breath praise the Lord. Praise the Lord.” In light of accelerated species extinction, I find this exhortation disturbing. What does it mean that humans are now so abundant and powerful that we have effectively diminished the number and kinds of creatures who have breath? That through habitat destruction, extraction industries, and the resulting climate changes, we have not only endangered ourselves but also diminished the world’s ability to praise?

No one knows how effectively we could reverse course on ecosystem destruction if we tried. Much is lost forever, no doubt. The moral thing to do, as Kathleen Dean Moore writes, is to work for restoration and protection anyway, though success is hardly guaranteed. I wonder what would happen if Christians decided to put our spiritual and organizational muscle behind this. What would happen if Christians determined to become known as “the people of refugia”?

It’s possible, even now, to build small places of refuge for mosses and pines and grosbeaks and all manner of life in our yards, our neighborhoods, our cities. We can plant trees, clean up watersheds, rebuild soil, help fisheries repair, fiercely protect the relatively healthy places we still have. Small pockets can spread and connect and become habitats. Humans don’t always destroy things. We can redeem and restore things, too. We might be surprised how vigorously life wants to rebuild, given the chance.

Right alongside this, I wonder what it would look like to recommit ourselves to creating, as Jesus calls us to do, refugia for human souls, too. Our soul sicknesses and our earth sicknesses are deeply interrelated, after all. What if we were to shape our lives and our churches not to strive for institutional perpetuation and the guarding of our right-ness fortresses, but rather for creating small, hidden spaces where hope can take shelter while devastation seems to reign all around?

Along with many, many others, I grieved the loss last week of the writer Rachel Held Evans, who died quite suddenly at age 37. Those who loved her and wished to honor her did not, in their tributes, emphasize her successful author platform or book sales (though those were indeed impressive), but her courage and generosity. She created refugia for people who were ready to leave the faith altogether or who dared step only tentatively toward it. She created refugia for those whose voices would not otherwise be heard. In a landscape of religious institutions that many people experience as brutal and destructive, she protected sheltering places where vulnerable people’s spirits could survive and regrow.

So many people long for refugia for the soul—people sick with grief, or languishing in depression, or systematically despised, or weary from long years of low-grade struggle. Ideally the church would provide a flourishing ecosystem where a huge diversity of people could heal and rest and grow strong. Ideally the church would cultivate spiritual habitats characterized by a complex and beautiful dance of mutual life-giving. Sometimes we even achieve that.

When we’re failing, though, when our life together seems characterized instead by explosions and destruction and smoldering ash, I wonder what would happen if we all concentrated on creating small, secret places where we can shelter one another for a time, let soul-life regrow. Maybe this means moments for lament in worship, habits of gratitude and encouragement, generous hospitality for weary people, music and laughter and good food. Maybe time spent among the trees or on the water. I don’t know. We’ll have to make use of whatever metaphorical (and perhaps literal) rock ledges and old logs we have handy. Happily, it seems there’s a strong overlap between refugia for the creatures and refugia for our souls–meditation gardens on the church property, farms doubling as retreat centers, that sort of thing. If we commit to small, life-giving shelters, who knows how quickly and vigorously the Spirit’s renewal might come?

We worship a Savior who came to this world in a hidden refuge, his mother’s koilia or cavity. Out of that tiny shelter, the Spirit’s power overwhelmed the destructive course of human sin with newness of life. The risen Lord breathed that same Spirit upon the disciples when they huddled, bewildered, in the upper room. That same Spirit still hovers over the face of the deep, still overshadows us.