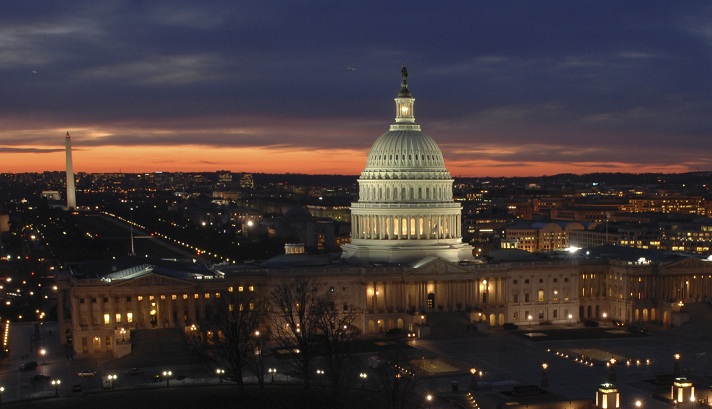 Journalists Ponder a Fluid Moment for Faith and Politics in America

While I am normally happy to flop on the sofa and watch mindless TV on Friday nights, last night I pulled myself together and attended the 21st annual Paul B. Henry Lecture, sponsored by the Henry Institute for the Study of Christianity and Politics. The lecture was a high point in a festival of heady discussion and distinguished guests mixing and mingling on Calvin College’s campus this week for the Calvin Symposium on Religion and Public Life and the Kuyper Conference—a brew of politics and theology that I only dared dip into for this one lecture.

The lecture this year was actually a roundtable discussion exploring faith, democracy, and journalism. My colleague, political science professor Kevin Den Dulk, managed to gather an impressive panel of notables to ponder what on earth is going on with religion and faith in America, from the point of view of the people who try to cover this confusing nexus for the news media.

The panelists were:
Michael McCurry, who served as Press Secretary in the Clinton administration
Elizabeth Dias, who covers faith and politics for the New York Times
Emma Green, who covers politics, policy, and religion for The Atlantic
Amy Sullivan, author of The Party Faithful
Ken Woodward, former Newsweek reporter, author of Getting Religion

McCurry, who at one point cheerfully recalled his life as a “human piñata for reporters at the White House,” moderated the discussion. Here are a few highlights.

“What we’re seeing right now, what we’re experiencing and living through is a fundamental reshaping of American cultural and communal life.” – Emma Green

The panel pondered aloud what religion even means in America these days. Dias remarked that religion doesn’t seem to be so much about belief systems as about “lived systems”—family structures and what we might call folkways. Do people vote a certain way because of religious principles or because of their race, gender, or economic stresses? It’s difficult to tease out motivations. Tribal identities mix and cross these days, old alliances break up and reform in new shapes. It’s more complicated than ever to sort out how people’s faith influences the way they vote—if it does. People are, after all, a “swirl of factors,” as Green reminded us.

One newer development, Green observed, seems to be the “filtering of politics into all parts of life where it hasn’t been previously.” She considers the “backwards flow of politics and how that’s seeped into religious life” to be “the most fundamental shift of the religion and politics equation.” In other words, political identity now shapes religious identity and even theology—religion and politics influence one another reciprocally.

“It’s going to be a long eighteen months, everybody. Buckle up, because it’s going to get much, much worse.” – Amy Sullivan

We may not yet want to follow election 2020 news, but our panel is professionally obligated. With some two dozen candidates running so far, the group was already observing emerging campaign strategies. For instance, Sullivan noted that Trump’s campaign team understands they will need white Catholic votes, and the only way to get them is by leveraging the abortion issue. “We’re already starting to see [the abortion issue] demagogued,” says Sullivan. Meanwhile, can Democrats figure out a way to lure pro-life voters away from Republican loyalties by making a place for them in the Democratic fold? This group was skeptical, at least for now.

“It’s kind of an emperor has no clothes moment.” – Amy Sullivan

On the question of whether we are indeed experiencing—as Den Dulk tentatively proposed when introducing the panel—a “renaissance” in religion reporting, Sullivan more cautiously termed it an “evolution.” Good religion coverage is a priority at the New York Times, Dias assures, and we are seeing some significant recent developments. Sullivan praised a “willingness among journalists, especially on TV, to push back against conservative politicians who cite religious explanations for things.” (Example: Jeff Sessions citing Romans 13 to defend Trump’s family separation policy.) “For a long time,” Sullivan continued, “mainstream journalists assumed that because [conservative politicians] asserted their religiosity so vehemently, that [the politicians] actually knew what they were talking about.” Reporters, not knowing better, imagined “there was a knowable right and wrong way of interpreting religion. Now [reporters] are starting to realize, oh yeah, no, these guys just have a interpretation. But it is not the only one, and it is not shared by all Americans.”

In addition, younger journalists of color and younger journalists in general are more willing to be up front about their own faith background, using their knowledge and understanding to shape stories and push interviewees. “This helps all of us,” Sullivan concluded, “because it takes the conversations deeper.”

“Colbert’s the best theologian on television, no doubt about it.” – Ken Woodward

Twice during the discussion, Colbert—who speaks easily and often about his Catholicism—drew appreciation from panelists. Woodward, in his statement, was affirming what Sullivan had said earlier: “Stephen Colbert is probably the best person we have right now on television to ask people questions about religiosity…. He does not let people get away with things. He’s got the experience and he knows what he’s talking about.”

“The flourishing … is real” but we “also face a significant religious literacy gap.” – Emma Green

Green celebrated evident gains in good religion coverage but also registered caution. We still need many more reporters who bring knowledge and depth of understanding to religion reporting. And editors, too, the others added. We still, too often, see boneheaded mistakes in religion reporting. Aspiring journalists, take note.

Is the “God gap” closing? (paraphrase of a question asked by Michael McCurry)

In other words, is the current association of religious faith with Republicans and secularism with Democrats getting broken down somewhat? Answer: yes, but. Earlier Sullivan had remarked that “Mayor Pete may be overstating things when he says he sees a renaissance of the religious left” but “we do see enthusiasm around the religious left that has not existed maybe ever, certainly not in the last few decades.” Along with the fracturing of the religious right, this is shaking things up in interesting ways. It’s a “fluid period.” Sullivan marveled that Democratic candidates are speaking openly about their faith even now, during the primary process.

Nevertheless, Dias warned, we can expect further “weaponizing of religion” for political purposes. The kinds of fear- and hate-mongering we have seen will continue or worsen. Combined with demographic shifts further diminishing the gaps between minorities and the white majority, this could lead to a “real crossroads of disaster.”

Well, I’ve left out so many interesting topics covered during the course of the evening, including what the rise of the nones does and doesn’t mean for politics, as well as a terrific discussion about where journalists find stories when the usual authorities don’t necessarily speak for the masses. Green had some particularly thought-provoking comments on how reporters have to be careful about “manufacturing authority” by quoting the same people over and over again. And I’m eager to hear more from Dias in the future about feisty Texas evangelical women fomenting mutiny in their tribe.

I’ll end with this one:

These were practical answers the panelists offered in response to an audience member who wondered how academics who write long, nerdy books on religion topics could be more helpful to journalists. The answer was for professor types to engage in social media in order get their ideas to the surface, and then to establish relationships of mutual assistance with journalists. This kind of social savvy is not usually a natural mode for us academics (there was much nervous giggling in the room when these suggestions were floated), but it makes sense. More circulation of ideas, more exchange of knowledge—these are good things in a democracy.

And hey, reporters, if anything newsworthy happens in seventeenth-century British literature studies, I will let you know.