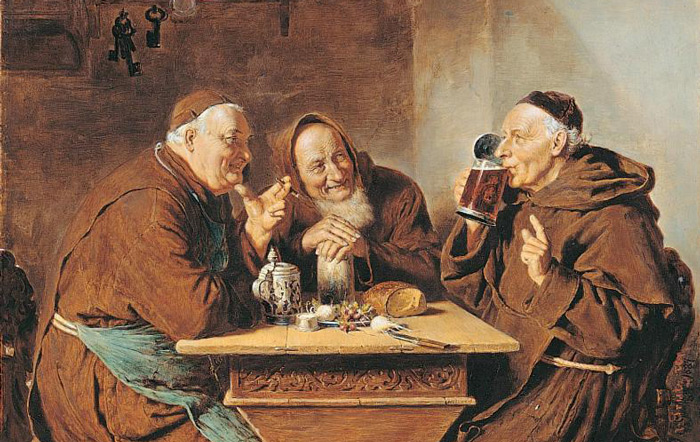 Reformation Day at the Kids-These-Days Cafe

Small clusters of saints in white robes, vaguely glowing, chatter convivially around heavy wood tables in a cozy bistro. The bright robes contrast with the dark wood paneling, rough ceiling timbers, and flagstone floors. Though everyone is drinking, no one is drunk.

JOHN CALVIN walks in the door, looking rather glum, and approaches the table.

With his foot, Luther pushes an empty chair out from the table.

Calvin collapses into the chair.

CALVIN
I’ve just had a long morning working
on that commentary on Revelation.

LUTHER
For cryin’ out loud, J, take it easy! Enjoy
your heavenly reward. No regrets, I say.

Luther raises his glass. The Wesleys raise theirs: clink.

CALVIN
It’s not about regret! I like working on
it. Besides, I’m not the only busy beaver.
Tom Cranmer has written 3,000 more
collects since he arrived.

CHARLES WESLEY
So what? I’ve written another 6,000 hymns.

JOHN WESLEY
I’d warn you that all this work is bad for your
health, but … kind of a pointless thing to say up here.

CALVIN
Hey, where’s Ulrich? He usually shows up
for these Reformation Day toasts.

JOHN WESLEY
Yeah, but he pops in and out and never even
nibbles a pretzel. I swear he’s gotten even
more persnickety in the afterlife.

JOHN KNOX walks in the cafe and heads toward the table.

LUTHER
The Knox-ster! Glad you made it!

The four men scootch their chairs to make room, making a racket as the chairs scrape the floor.

KNOX
Sorry I’m late, guys. I was surfing the internet
for political news from the United States.

JOHN WESLEY
You’re not thinking of reissuing your 1558
masterpiece, “The Monstrous Regiment of
Women,” are you?

KNOX
Guys, no! Stop it! I’ve repented of all that
misogyny. You know I have! Mary and Liz and
I have coffee together every week. Some of my
best friends up here were female heads of state!

JOHN WESLEY
OK, OK, relax. We’ve all done our share of
repenting when it comes to our views on women.

They all take a swig, trying not to look too sheepish.

JOHN WESLEY
So: annual state of the church?

Everyone sighs. A quiet moment passes.

LUTHER
Well, I have to say, I like what the pope is doing.

LUTHER
I do! I mean, if he had been pope in 1517,
we might have nothing to commemorate this week.

They all ponder that one for a moment.

CALVIN
Say, Marty, have you ever had that coffee with Leo?

LUTHER
Nah. It took us three hundred years up here before
we could even shake hands. He was so mad there
wasn’t a purgatory! He expected me to fry to a crisp
in purgatorial flames for at least a thousand years before
he would have to face me. Give him another three hundred
years, I guess, and we’ll get to the coffee-buddy stage.

CALVIN
OK, so, state of the church. You know what bothers me,
fellas? Well, two things. OK, three things…

The others roll their eyes.

JOHN WESLEY
Marty came up with ninety-five things, J, and you
only have three?

CHARLES WESLEY
Yeah, I’ve always wondered about that, Marty. Why
not add five more and make it an even hundred?

LUTHER
Oh I had five more at least. I was just getting started.

CALVIN
(ignoring them)
Anyway, so what broils my bacon is that Christian writers
these days do not do their homework. They have one lousy,
passing thought and they think it’s worth “blogging” about —
or even writing a whole book about. They’ve read nothing.
They do not know the tradition. Back in our day, we studied
for years before imagining we could turn the world upside down.

KNOX
And just how old were you when you wrote the Institutes?

CALVIN
Twenty-seven. But I had studied! Day and night!

LUTHER
I hear you. And these young hotshots think they’re coming
up with fresh new ideas, when really we thought of it all
before. The whole “beer and hymns” thing, for instance?
I totally thought of that first.

All stand and raise their glasses solemnly.

LUTHER
And to unity in the church!