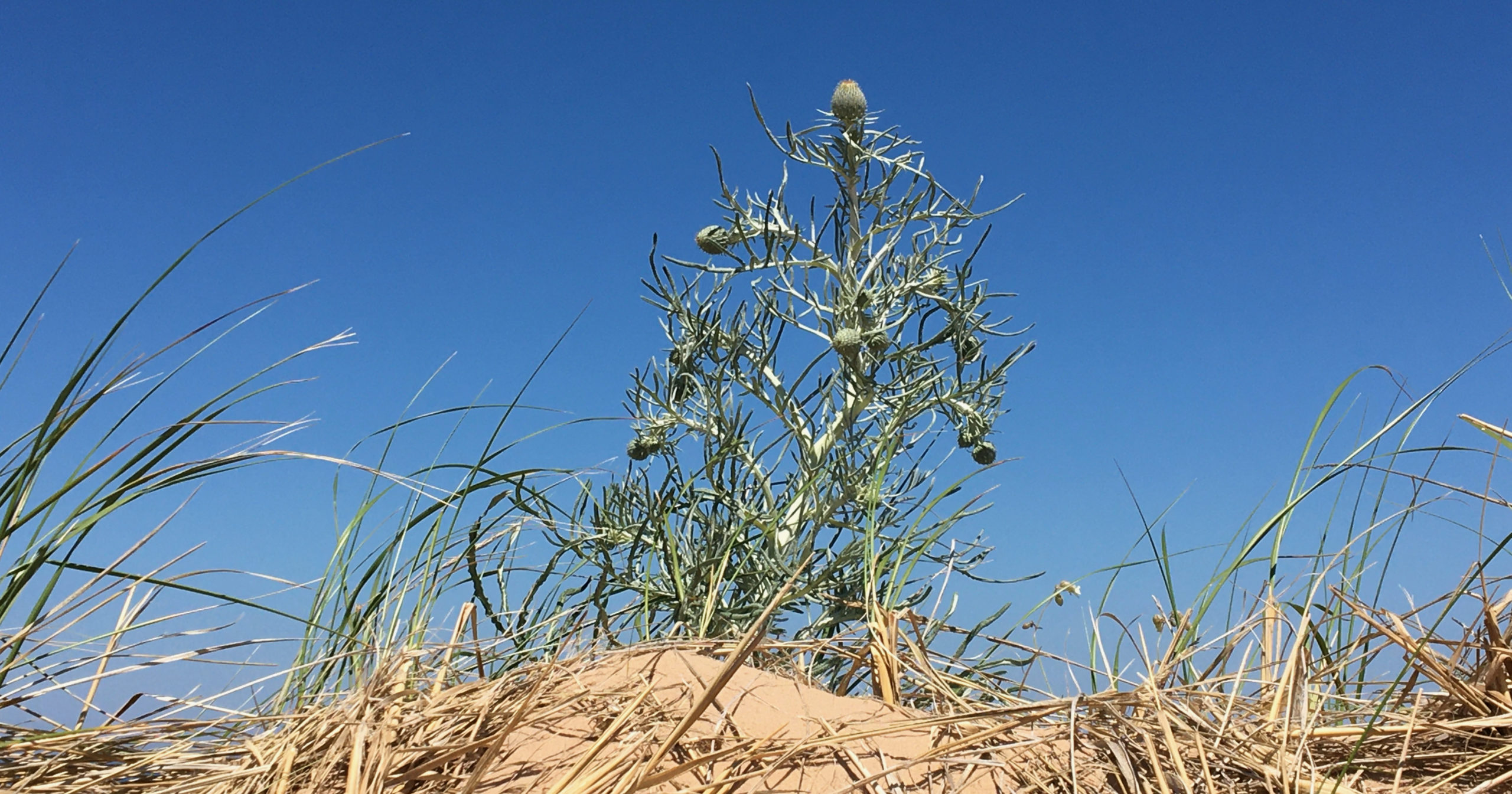 We chose the perfect day to hike the Dune Climb Trail at Sleeping Bear National Lakeshore: seventy degrees, light breeze, a little gauzy cloud cover softening the sun. On a hotter day, this would have been a baking, miserable trek, as close as we get in Michigan to crossing the Sahara.

People of all ages and degrees of footwear labored up the famous dune face just yonder from the parking lot. Others, especially the kids, pounded down headlong, arms flailing, heels dig-sliding down the surface with every leaping step. Ron and I were prepared not only to climb this first dune, but to do the whole trail stretching to Lake Michigan—a “moderately strenuous” 1.25-mile challenge each way, according to the trail guide available at the visitor center. We were feeling pretty smug, properly equipped with hiking shoes, sunscreen, and CamelBak pack with freshly filled water reservoir. We even thought to pack a lunch and wear our swimsuits under our clothes, thinking ahead to that moment when we would emerge rejoicing at the vast Lake Michigan horizon, longing to dip our sweaty bodies in the lake.

That first dune face was no problem, but once we started on the trail, the real work began. The trail is soft sand all the way, crossing ridge after ridge—up slopes, down slopes, up more slopes. As we chuffed through the sand, a trickle of people passed us coming back the other way. Lots of families with young kids. Reckless teenagers walking barefoot. One intrepid couple, each with a baby in a backpack equipped with an awning over the babies’ heads, so that they looked like royal infants carried in litters. We exchanged friendly words with folks. “Not much farther,” a teenager assured us (did we look haggard?). A couple from Pennsylvania told us they had driven eleven hours to visit the dunes. This was their first time in Michigan.

In brochures and visitor center displays and trail signs, you often read about “fragile” dune ecosystems. In one sense, this is true. The word “fragile” is a warning that humans can destroy dune habitat with our trampling feet—and ATVs and vacation homes and golf courses. A ranger later told me, rather ruefully, that the dune climb and trails were a compromise reached when the park was formed in 1970. In order to keep much of the park as a preserve, some places in it had to be set up to receive human visitors. I respect the “fragility” of this unique ecosystem, but as Ron and I tramped along (staying on the trail, of course), what struck me instead is the toughness and tenacity of life on a dune.

Dune grass, for instance, needs to be buried by sand every year. That’s how it thrives. It is about the only plant that can take root in a bare, active sand dune. Its root systems thicken and build layers every year, so that dune grass helps evolve an active dune into a more stable dune where more plants can thrive. Along our trail, dune grass edged the slopes and bowls of sand, fringing the broad stretches where other plants were starting to find their way.

Cottonwood trees may be the most crotchety and determined citizens of the dunes. Like dune grass, they’re used to being buried. They’ll send out root-shoots if they have to and pop up a stem a little further on or higher up, so they grow in clumps connected under the sand. We saw one bent old cottonwood with one trunk dry, sand-scoured, and barkless, one trunk that looked recently dead, and one trunk in the middle topped with a pom of healthy green leaves pattering in the breeze.

Lots of scrubby groundcover plants thrive on dunes, too, all of them tough enough to tolerate dryness, extreme heat, and winds that carry scouring suspensions of moving sand. There’s a type of juniper and a plant whose name I haven’t learned yet that looks like a creeping cousin of an olive tree. I even saw Pitcher’s thistle, a federally endangered species that only grows on Great Lakes dunes.

It’s hard to get excited about the Pitcher’s thistle. I understand why people are worried about other endangered creatures, like the cuddly panda bear or the magnificent rhino, but who would miss a rare thistle if it disappeared from the earth? Even as thistles go, the Pitcher’s is not exactly a beauty. It’s grayish, papery, and frankly rather stubby. It would never grow in your garden, but if it did, you would probably pull it out without remorse, maybe even with satisfaction. It’s finicky, too. It takes five to eight years to bloom, flowers and produces seed once, then dies. Admittedly, one of its tricks might solicit some respect: it plunges a six-foot-long tap root into the sand to anchor it and siphon up water.

Why worry about this thing? It’s a tough world out there on the dune. If some old weed can’t keep up, hey, survival of the fittest, you know? It’s true that humans have made it tough on this plant with our sand mining, development, and dune-tromping, but other stuff is surviving. Nothing stays the same, life is always adapting and evolving, especially on a dune. Whatever.

And yet. The Pitcher’s thistle has its place. It might seem homely and dismissible to us, but goldfinches and bees visit it for their groceries. The artichoke plume moth, when artichokes are in short supply, seems to consider it an ideal bed for incubating its larvae, although we’re not entirely sure about whether that benefits or drains the plant. In any case, Pitcher’s thistle is one factor of biodiversity in one interconnected system that makes up one unique landscape on the earth.

What is the value of a thistle? We don’t entirely know. I suppose God does. I suppose the little prickler gives praise to God in its own thistly way, just by being itself in cooperation with other nearby creatures being themselves. Is that enough for us to give it some respect, help it along?

Fortunately, looking after the Pitcher’s thistle does not have to be that difficult for us humans. We stay on the trail. Naturalists keep an eye on thistle populations, try to reestablish them in likely spots. Conservation groups educate landowners and tourists to let them be. This particular conservation project is not setting us up for dicey cost-benefit analyses. We can “preserve biodiversity” and have our fun, too.

What if it weren’t that easy? A lot of people were having a jolly good time on the trail that day, enjoying the Michigan summer, marveling over this splendid landscape, maybe even gaining respect for the stark beauty of dunes. All good things. What if we had to give it all up and stay off the dunes forever—for a thistle?

Thankfully, in Sleeping Bear National Lakeshore, humans and thistles can find a pleasant way to coexist. Ron and I eventually made it to the lake. The water was warm and sea-glass turquoise out to the depth-drop, where it shifted to midnight blue. We had a delightful swim and ate our sandwiches, then headed back, counting the hills this time. We counted eleven. Note to hikers: number seven is a doozy.

When we reached the dune face back at the parking lot, we ran down, arms flailing.