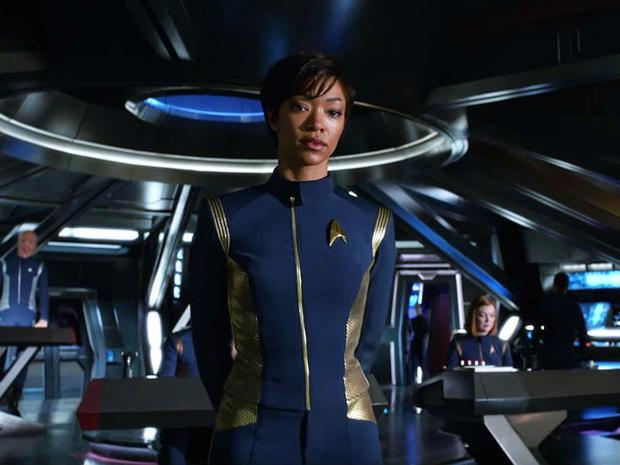 Discovery: A Report from the Final Frontier

Warning: some mild spoilers ahead.

I hereby provide a public service by filing this scouting report for those of you wondering whether the new Star Trek series, airing on the subscription service CBS All Access, is worth the investment of your time and money. The answer is: maybe.

Honestly, it’s too early to tell whether Star Trek: Discovery will find its footing. We are almost halfway through the first season—episode 7 airs Sunday night, with one more to go before a midseason hiatus—and at this point, even as a lifelong fan and person who is right now wearing Star Trek socks, I would describe my status as “still interested but not (yet) thrilled.”

Created for CBS by Trek veteran Bryan Fuller along with current showrunners Alex Kurtzman and Heather Kadin, the new series promised to bring some appealing new ideas to the table. The action begins about ten years before Star Trek: The Original Series, filling in history not yet explored in a Trek universe crowded with five series and numerous feature films of varying quality, not to mention all the pseudo-canonical stuff.

This time, we have our first African-American woman protagonist, played by Sonequa Martin-Green. She’s a first officer, not a captain—at least as the narrative arc begins. We have a new starship, the Discovery, for the FX people to kit out and then rip apart in battle scenes. And we’ve been promised an explanation for how the Federation arrived at a cold-war-style standoff with the Klingons, that galactic political backdrop providing both dramatic tension and obvious social commentary for the early years of Trekdom.

So a lot of things were set up to go right, and in some ways they do. In the first two episodes, we are presented with a prologue meant to provide the backstory for our hero, Michael Burnham. (Yes, Michael is her name, and yes, that is how they are spelling it. Why? Apparently this.) As a child, Burnham was orphaned in a Klingon attack and raised on Vulcan by none other than Spock’s parents. She is now well into her career with Starfleet, and at first, we enjoy exciting mentor-protégé chemistry between the talented young Burnham and her seasoned-and-sage captain on the U.S.S. Shenzhou, Captain Georgiou, played by the wonderful Michelle Yeoh. Then, strategic threats materialize, moral dilemmas ensue, Burnham makes a tough moral choice, and her best intentions devolve into mutiny and land her in the brig, stripped of rank. Terrific!

However: those Klingons. How do you manage to make a noble but flawed warrior race so boring? Who thought it was a good idea to spend forty percent of the first two episodes (at least it felt like that much) in what amount to Klingon committee meetings, with actors standing around buried deep in their Klingon-head-helmet prosthetics, grunting out their lines syllable by syllable—in Klingon, of course—through a thicket of bad teeth? We only know what they’re saying because of the subtitles, and frankly even without the subtitles one could predict what they’re grinding on about.

Here’s the premise: a group of misunderstood, outcast Klingon traditionalists have rallied behind a messiah figure. They want to reunify the divided Klingon empire by fighting off the polluting influence of those lying, corrupt, supposedly peace-loving Federation humans. Reviewers quickly noted the obvious connection to current U.S. politics: “Make Kronos Great Again.” Well, as I say, ham-handed social commentary is a key aspect of Trek tradition. But we do not need scene after tedious scene of Klingons grunting out their motivation. We get it.

The first two episodes have other problems, too, such as overly expository dialogue, clumsy flashbacks, and one seriously ill-conceived kidnapping mission wherein my excitement about Michelle Yeoh’s character was, shall we say, abruptly disappointed. Star Trek fans have ridden out these bumpy opening episodes before. (Remember the giant jellyfish reveal in The Next Generation premier, “Encounter at Farpoint”?) So, OK. We move on, loyal and still hopeful.

Episode 3 gets Burnham onto the Discovery, where we might expect to settle in with the kind of ensemble cast that has served Trek storytelling so well. Unfortunately, I’m still not sure where to invest my interest. Burnham’s new boss, Captain Lorca (Jason Isaacs—yes, it’s Lucius Malfoy!), seems a familiar type as the Starfleet captain with the dark past, willing to bend the rules for wartime. Burnham’s bubbly, awkward roommate, Cadet Tilly (Mary Wiseman), is a bright blast of energy. For now, she’s the one I want to know better. Lt. Ash Tyler (Shazad Latif), introduced in episode 5 as a sort of post-traumatic gentleman-soldier, provides some welcome romantic tension in episode 7, but geek-world has pegged him as a spy, so I can’t fully enjoy this. Lt. Stamets, an astromycologist (i.e., space fungus expert), started out as an arrogant grumpy-pants, but he’s lightened up after some gene-splicing with a space tartigrade, and in episode 7, he starts to get fun. He and his partner, the ship’s doctor, are the first openly gay couple in the Trek universe.

As for Lt. Commander Saru, I do not understand the general approval in reviews. Saru is evidently supposed to be the requisite rational mind at the science station, in the tradition of Spock and Data. The actor who plays him, Doug Jones, is an enthusiastic, lifelong Star Trek fan, which is lovely. But this character is a bad idea. He’s a Kelpien, a sort of cross between a catfish and a gazelle, an alien species that evolved as prey in a predator-prey ecosystem. Hence Saru’s particular superpower is that his tendril-like neck-hackles wriggle when he senses danger. Really? A command-level officer whose special gift is being afraid? This is even worse than TNG’s Deanna Troi dreamily intoning the obvious: “I sense anger.” “We should be cautious.” Yeah, thanks.

Meanwhile, Burnham is growing on me. Her flashback scenes, in which we see Martin-Green attempting to portray a Vulcanized young woman, feel stiff and mannered, without the depth and coiled-spring poise of the best Vulcan characters. It’s tough, as one reviewer noted, to create vitality at the center of the story when your protagonist has been conditioned to suppress emotion. Getting court marshaled and kicked back to no-rank ignominy has opened the character up somewhat, and Green seems now to be crafting a courageous, more complex figure that we can admire and cheer for.

Still, the series needs to find a consistent style and tone. Each new Star Trek iteration gets more difficult to calibrate because the heap of influences behind it only gets higher, the stylistic proliferation more dense. In these early episodes of Discovery, we can see JJ Abrams camera work, Star Wars-like spacecraft landings, dark-industrial interiors from Deep Space Nine, and costume similarities from Enterprise. I get it. It’s tough to navigate the demands of homage, continuity, and novelty.

Finally last week, when it became clear that “Magic to Make the Sanest Man Go Mad” was—oh joy!—a time loop episode, for the first time with this show I thought, “Ah, here’s a true Star Trek ep.” What made it so? A sci-fi premise that created multiple dramatic problems. Serious characters forced into awkward situations. A big ol’ space whale slimed onto the cargo bay floor. The crew working together to cleverly disentangle themselves from mortal danger, and what could have been a vengeful squashing of the enemy turned into a humorous, Starfleet-style comeuppance. There ya go. That’s what we’re looking for.

So there’s hope. The trick will be to find a new way, fitting to this cultural moment, to tap into the genuine Star Trek soul. Reviewers have been chattering about this in terms of “optimistic” versus “dark.” So, for example, the review in Christianity Today praised this new series for being the first Star Trek iteration to take human sin seriously. Previous series, in this writer’s view, were too optimistic about human nature, while Discovery presents Star Trek ideals in a “more realistic framework.” Hunh. That seems like a reductive understanding not only of theological categories but also of Star Trek.

After all, Trek’s optimism about the future and about human nature has always been aspirational more than declarative. The original series was created in the midst of the Cold War, Vietnam, Civil Rights, and social upheaval—not in order tell us how lovely humans are, but precisely to call us toward our better natures. A different future could be possible if we want it, Gene Roddenberry meant to say. Sure, we’re not going to get there without God, if ever, but it puzzles me that a Christian reviewer would resist the idea that we do have better natures. Sinful, yes, but hasn’t God made us a little lower than the angels? When better way to marvel at this than when we consider the heavens?

Moreover, it’s not as if previous Trek series, including the original one, left human shortcomings unexplored. TNG’s previously cited premier episode put humanity on trial for its cruelty and violence, and we didn’t exactly get exonerated. Deep Space Nine spent long plot arcs exploring corruption and hypocrisy among the religious establishment on Bajor. I would argue that wherever Trek celebrates our noblest principles, it also exposes our tendency to rationalize violence and undercut our best aspirations. For every stirring speech on human curiosity and freedom, we have a senseless fist fight in a bar. For every paternalistic evocation of the Prime Directive, we have a hastily scrambled-together, obviously self-serving rescue mission that breaks all the rules. Even Vulcan logic is more of a method than a moral anchor. Logic, after all, can lead to a preemptive first strike, as it does in Discovery’s opening episode.

Star Trek has always managed to take its ideals seriously while simultaneously dousing them with self-critique, cornering characters into moral dilemmas and allowing us an affectionate laugh at their occasionally silly pretense. At its best, Star Trek is a delightful paradox: a high-concept philosophical science fiction platform and an alien-of-the week picaresque; an ensemble-cast workplace drama celebrating professionalism, expertise, and high ideals, and a parade of silly space creatures that resemble extra-large ticks or tartigrades; a thought-provoking commentary on our most urgent political, moral, and social quandaries and a way to get characters into humiliating tangles with Ferengis—or turn them into newts. Plus: explosions!

In the context of this demanding legacy, a better assessment of Discovery’stask, in my view, came from the Guardian (Brits love Star Trek, you know). A good dose of optimism is exactly what we need right now, says this writer, the holding up of ideals in a terrifying and weird universe, so let’s hope Discoveryfinds a way to renew that legacy for this moment. I agree. We have plenty of human depravity on display in shows like Breaking Bad, Mad Men, Battlestar Galactica, and even, its own way, Modern Family. Aspiration toward a better humanity has always been the genius at the heart of Trek.

So Sunday night I’ll be plopped on my sofa again, giving Discovery another chance to find its soul. Since CBS has already renewed it for season 2, we’ve got some time to get there.