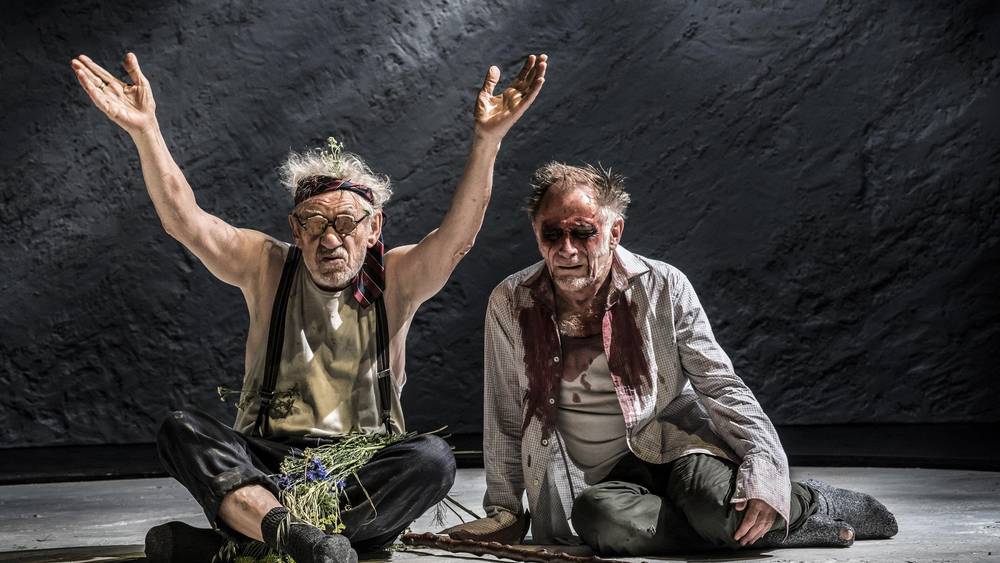 The Weight of This Sad Time

Thankfully, I did not have to fly to London to see Ian McKellen play the role of King Lear. I only had to drive to Lansing, an hour away, and join about twenty other souls in a mostly empty movie theater. We were the fit though few, at least in this location, showing up for a National Theatre Live broadcast of the stunning Lear now on stage at the Duke of York’s Theatre in London’s West End. Exactly as The Guardian reviewpredicted, I found the production “smart, lucid, and superbly detailed.”

I’m teaching Shakespeare this semester, so a few of my students and I went together. We all agreed it was well worth a long Thursday evening and twenty bucks to see this production and to witness McKellen’s last turn on a stage. He’s almost eighty years old—just the age of King Lear—and still a powerful, consummate actor. His performance in this unbelievably demanding role makes his familiar work as Gandalf in The Lord of the Rings movies seem like a cakewalk.

Even more so than Shakespeare’s other tragedies, Lear tends to leave me in an emotional tangle. I never quite know where to invest my sympathies, nor what to do with the despair with which the play ends. This time, I brought into the theater with me the weight of this week’s news cycle, and I found myself responding with a remixed blend of anger, frustration, and sorrow to the themes of loyalty and generational conflict in the play.

What do you do with a powerful, privileged old man—who has always been a vain, impulsive bully—when his mind begins to disintegrate? That’s the problem posed in the first scene, when Lear proposes to “retire” under disastrously stupid conditions. He divvies up his kingdom, sets his daughters a love-test, disinherits his favorite daughter for her refusal to play his theatrical game, and banishes his most loyal advisor, Kent.

For the first two acts of this production, I must say I sympathized with Lear’s eldest daughter, Goneril. She and her sister Regan are sometimes played as a pair of evil hags from the get-go, but this Goneril (played by Claire Price) has a serene chill about her that, we soon see, derives from decades of placating a difficult father. By Act 1.4, Lear has moved into Goneril’s house with a hundred (a hundred!) rowdy “knights.” Lear and his bros party freely, disrupt the household, abuse the servants, tell vulgar jokes. When Goneril very reasonably asks them to stop it, Lear unleashes on her some apocalyptically vulgar emotional abuse.

All the way through Act 2, the dispute seethes over whether Lear can invade his daughters’ households with as many of his party-boy pals as he pleases. Object, and he will spew at you the most disgusting tirades he can imagine—and he can imagine a lot. All I could think of throughout this sequence was “toxic homosociality.” Boys will be boys—or knights will be knights, as one of my students sardonically remarked—and women who challenge that selfish privilege can expect savage abuse.

By the end of Act 2, Lear has stormed out into a storm on the forbidding heath. He’s “in high rage.” Both the daughters have literally shut the doors on him. Regan remarks, “to willful men/ The injuries that they themselves procure/ Must be their schoolmasters.” The sisters have begun to reveal their cruelty, and in this production, Regan (Kirsty Bushell) turns out to be distressingly kinky. Nevertheless, I had to side with her at this point.

Shakespeare sets up a parallel foolish-father plot with the Duke of Gloucester, who is duped by his illegitimate son Edmund into believing his legitimate son Edgar wants Gloucester dead. Gloucester, too, must go to school on his own injuries. He boasts in the first scene of the “good sport” involved in his adulterous fathering of Edmund; later Edmund is the one plotting against him. Edgar eventually remarks of Gloucester, “The gods are just, and of our pleasant vices/ Make instruments to plague us.”

In Acts 3 and 4, everything falls apart. Edgar flees for his life and hides himself as a beggar, Lear loses his hold on sanity, Gloucester gets his eyes gouged out by Regan’s sadistic husband, the sisters plot against each other with Edmund’s savvy assistance, and let’s see, what else? Oh yeah, Cordelia borrows her new husband’s French army to come and rescue her father, who has wandered off again.

My sympathies, probably as Shakespeare designed, began to soften toward Lear in the “Nebuchadnezzar” scene. Much of the “cosmological pretension” of the storm scene has dissolved. Lear and the blinded Gloucester find each other in a meadow near Dover, both cast out, helpless, pathetic. Lear wears flowers in his hair and burbles nonsense, some of it still vulgar and misogynistic. Cordelia and her army discover him and care for him, setting up what is always the most beautiful scene in the play, Act 4.7, Cordelia’s forgiveness.

Here, at last, Lear’s mind clears. He’s mild and repentant. He reckons with his cruelty to Cordelia and sees himself clearly for the first time: “I am old and foolish.” In McKellen’s performance, intimately available to us through the camera’s lens, I recognized with a pang in my heart my own father’s mannerisms in his last days, both the fighting against diminishment and the helpless yielding to it. I know from experience how forgiveness wells up in the presence of this struggle.

In Act 5, I found myself pondering the different ways in which the younger generation in this play copes with what the older generation hands them. Why do some of the children turn cruel and pathological and others manage to pluck integrity and mercy out of all the dysfunction?

After all, good people tend to get crushed in this kingdom. Cordelia is sent into exile, Kent and Edgar have to adopt disguises, Albany (Goneril’s decent husband) spends most of the play in denial. Why does Kent, the most decent figure of Lear’s generation, remain loyal? Is it because Lear was once noble? Or just because Kent’s only resource for dealing with ignobility is by continuing to fulfill a duty?

More pointedly, why do Cordelia and Edgar both choose to care for and forgive the fathers who have betrayed and rejected them? They do not seem to inherit the sickness bequeathed them by the older generation’s selfish vanity. Shakespeare gives us no clear answer to this problem. Perhaps we are left with only a challenge: will you capitulate to the sickness? or resist it?

Shakespeare is right to show us that there is no guarantee of reward for choosing integrity and mercy. Over against the example of his sources, Shakespeare eschewed a reparative ending. In Shakespeare’s final scenes, the noble among the younger generation pay a heavy price for the foolishness of their elders. Cordelia loses her life. Edgar and Albany are left, the last ones standing in a ruined kingdom, traumatized and overwhelmed.

I guess you’re in charge, says Albany to Edgar, a meager gesture to the expected restoration of some social order at the end of a tragedy. But Edgar can only reply with the final lines of the play:

The weight of this sad time we must obey;
Speak what we feel and not what we ought to say.
The oldest hath borne most; we that are young
Shall never see so much nor live so long.

And I thought: You know what, Edgar? You’re wrong. You that are young have borne plenty, and now you stand in the wreckage set in motion by the last generation. You are the ones who have to live with it now. You are the ones left to pick up the pieces, and it’s not at all fair. You’re exhausted and wounded, and you’re not sure if there’s hope. And I don’t know what I ought to say.

Look here for the full cast and crew.