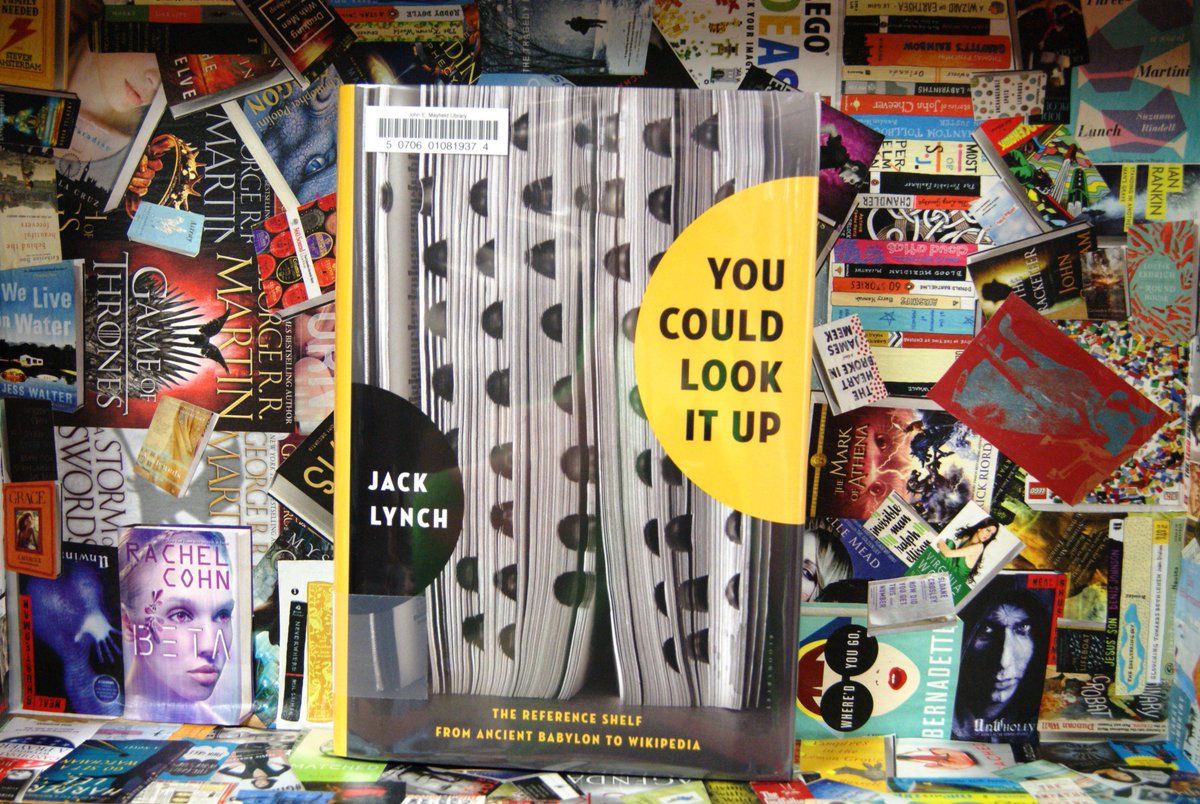 The Call of the Library

Of all the good books I received as Christmas gifts this year, one has captured my heart: You Could Look It Up: The Reference Shelf from Ancient Babylon to Wikipedia (Bloomsbury, 2016). I realize it’s hard to imagine a geekier volume than a history of reference books.

Oh, but open the cover and frolic with me in the playground of knowledge! Much of it obscure! Written by Jack Lynch, a professor of English at Rutgers-Newark, You Could Look It Up invites exactly the kind of delighted dabbling that a reference work should.

As one might expect from an historian of language like Lynch—someone who thinks in terms of lexicography, anatomies, and systems—the book is beautifully organized. Twenty-five short chapters march through time (roughly), beginning with The Code of Hammurabi and ending (obviously) with Wikipedia. Each chapter spreads out some context and then focuses on a pair of related works—most but not all are books—that attempt to encode a particular area of knowledge. Civil law, maps, medicine, the rules of games, etiquette, music. Of course there’s considerable attention to dictionaries and encyclopedias, as well as an examination of the messy overlap between those terms.

Between the main chapters, Lynch has inserted clever “half” chapters, like thin books wedged between two thicker books on a shelf. The half chapters address ongoing issues connected with reference works, such as the development of alphabetical order or the philosophical objections to indexing. One especially delicious half-chapter—we are deep in geeky-land now—explains the terms “ghosts” and “mountweazels.” Ghosts are entries, for instance in a dictionary, that accidentally slip in even though the word or item in question does not, in fact, exist. “Mountweazels” are intentionally fake entries, pranks often intended to catch plagiarists who will copy them into another reference work without doing their own research.

One of the more melancholy half-chapters laments lost reference works that we know existed but have since been destroyed by fire, water, neglect, or other indignities. We also learn, I’m happy to say, that in 2010, a scholar laboring in the shadowier reaches of Oxford’s Bodleian Library accidentally discovered Boswell’s manuscript of a Scottish dictionary, long considered lost. It was bound with a work by another author, quietly gathering dust on a shelf.

Oh dear. Already I’ve skittered down a referencey rabbit hole. Back to the main chapters.

You Could Look It Up celebrates the “joys of obsessive research.” Lynch introduces us to some of history’s quirkier personalities, people whose brilliance, obsession, and freaky perseverance represent one of humanity’s most wonderful drives: the desire to organize knowledge. Lynch places these characters and their projects in the broader context of their age, turning each chapter into a miniature social history as seen through tables, columns, maps, and grids.

For instance, Chapter 8 explains two seventeenth-century volumes made up mostly of mathematical tables. One of these, the Arithmetica logarithmica (1624), is 400 pages mostly of logarithm calculations. Labored over for about a decade by Englishman Henry Briggs, this work was so handy that it helped make “the scientific revolution possible” because it spared so many scientists and mathematicians the time-consuming bother of doing these calculations themselves. Of course, the volume was made obsolete in the twentieth century by small, cheap computers.

Another chapter describes the Index liborum prohibitum (1559), the post-Reformation book listing all the titles the Roman Catholic church considered off limits. This list grew through many editions, including the ones that prohibited the reading or printing of works by Copernicus, Kepler, and Galileo (all removed by 1835). The practice of issuing the Index was finally abandoned, after Vatican II, in 1966.

In other chapters, we read about the origins of Gray’s Anatomy and the Diagnostic and Statistical Manual of Mental Disorders. Or relish the legendary dictionary rivalry between Noah Webster (American) and his predecessor Samuel Johnson (English). Or marvel that the Wisden Cricketers’ Almanack has produced an annual edition, uninterrupted, since 1864. Or ponder the very interesting chapter on sex manuals—delicately described—and learn that The Joy of Sex in 1972 and Our Bodies, Ourselves in 1973 were not all that shockingly new, but instead derived from a long, albeit varyingly racy tradition.

Encyclopedia Britannica, Guiness Book of World Records, Dictionary of Greek and Roman Antiquities. Imagine the exertions required to assemble and publish these things! Lynch certainly invites us to appreciate expertise, but he also assesses the errors and blunders, the politics and biases that figure into the creation of knowledge. That’s part of the story, too, and sometimes the most entertaining part.

Nevertheless, I think one of the reasons I’m enjoying this book so much is that it feels like a respite. In a cultural moment that disdains expertise and places knowledge, fact, and truth in scare quotes, this book invites us to appreciate all the love and labor required to know things.

Hear that call: enter the library, exhale in relief, breathe in the quiet. Walk among the orderly organization of knowledge, rows and rows of fascinating secrets. Find exactly what you’re looking for—and be ready for unexpected surprises.

You Can Look It Up
454 pages, including glossary, acknowledgements, notes, index, plus color plates.