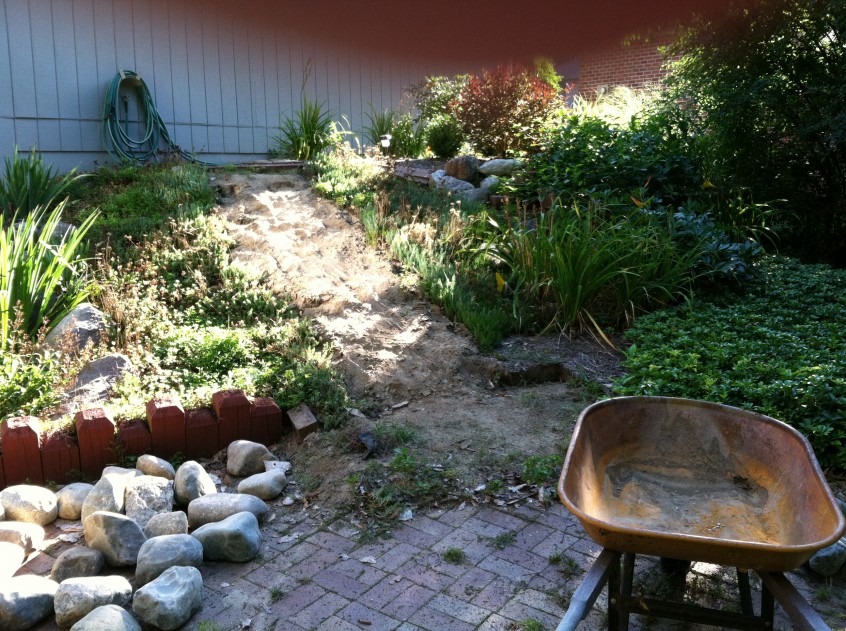 Sin and Wrath in My Backyard

Adam: “That woman you saddled me with, it’s all her fault.”

God: “Yeah, right. Look, the deal is, you’re still responsible. So you’re going to have to sweat and work the ground if you want to eat. And from now on, anything having to do with horticulture will serve as a dandy metaphor for sin.”

Every time I work in my yard, I feel as if I’m living out metaphors. Weeding? Obviously a metaphor for rooting out sin. Pruning? A metaphor for suffering, through which God often purges… our sin. Mowing? Well, you have to keep the grass cut and watered because otherwise you leave it vulnerable to weeds, which of course symbolize… sin. So is everything in the yard really a metaphor for sin, or am I just an obsessed Calvinist who lacks imagination?

Of course there are the happy, growth-related aspects of yard work: planting and watering and blooming and blossoming. But it does seem as if much of the actual hands-on work involves some form of destruction. Weeds are not the only things that become overgrown, so you wind up trimming and pruning and cutting back the good plants, too. Flowering annuals get leggy. Perennials need to be dug up and divided. Bushes get too bushy. Trees put out too many limbs or their roots get ornery and start making the lawn look like an unmade bed. Thank goodness for the nice spruces that just grow slowly and do their thing. They drop their needles but only in a neat carpet directly underneath. That’s it. They have a tidy “habit.” Good for them. Everything else requires destruction, so it’s hard not to gird myself for mild spiritual warfare whenever I march out there on a Saturday morning.

Let’s try this one: chipmunks. Are they about sin, too? Well, I have a different idea here. A couple summers ago, I waged a fierce battle for territory against a wily clan of critters who had set up headquarters in my wood pile. I realize that chipmunks are cute and harmless, at least in the moment. Awww, can’t we all just get along? No. Because chipmunks have the potential to cause pointless, expensive damage. It begins with a few tunnels near the petunias, but soon they’re digging a condo development under your front stoop for their future generations, and the next thing you know the foundation is sinking.

I decided that chipmunks are a great metaphor for anxiety. Here I was, trying to build this yard where I could relax and enjoy creation as we’re always being enjoined to do, and instead I was obsessing about chipmunk control. So I began to philosophize: You know, life is full of chipmunks. Chipmunks are like the nagging anxieties that shouldn’t be a big deal, but can easily drag you down if you let them. You must control them! But of course one can never achieve an entirely chipmunk-free life.

At last I did win that war. For security reasons I won’t explain how I did it, but let’s just say that when it comes to my little kingdom, I am not a pacifist. Now I’m left with one bachelor chipmunk, still bunkered in the wood pile. We’ve called a truce. I don’t think he succeeded in reproducing this summer, nevertheless I’ve got my eye on him. Constant vigilance!

Let’s try another metaphor and see if we remain sin-free: landscaping projects. This weekend we hope to turn the old rotting-wood-and-broken-brick “steps of doom” into the lovely-stone-and-stone-chips “steps of wonder.” This project has so far required me to go the rock yard and hand-pick a bunch of correctly sized rocks, load them onto a borrowed trailer, and then get several fourteen-year-old boys to unload them into my backyard. (That part involved pizza.) The next step will involve shovels and lifting and bending and other back-straining activities, not to mention a little geometry and a good deal of design creativity.

I’m rather excited about it. I feel like a kid at the beach building a sand castle, except that no waves are going to wash this one away by evening. I’m using rocks.

We do seem to enjoy building little structures, little worlds. I remember how my kids, like anyone’s kids, loved to play with blocks. Come to think of it, blocks also involve destruction—gleeful, headlong destruction. For very little kids, building the tower is half the fun, and knocking it down is the other half (Babel?). As they get older, they’re more interested in permanence. We went through a long and prosperous Duplo era in my house before we moved on to Legos. I remember how much the kids hated to take their creations apart and tumble the blocks back into the buckets. We often wound up with little spaceships and castles on display for weeks on coffee tables and side buffets and shelves.

So I suppose houses and gardens are just big, elaborate, expensive building blocks. As grownups, we like our creations a lot more permanent. However, we do also enjoy the destruction that makes way for the new and improved. There’s something irresistible and deeply satisfying about the whole process. This is amply demonstrated by the full lineup of makeover shows on the home improvement channels.

All right: what spiritual reality does this playful, creative, destruction/building process stand for? Our God-given, culture-making impulse to subdue the earth, to create beauty? Or maybe it’s about spiritual growth. Spiritual growth is not always and only about rooting out sin. Sometimes it’s just about moving on, as part of a normal maturing process, to the next stage. The destruction feels good, because the old stage has served its purpose. It’s no longer needed. It’s time to build the new.

Thanks to old Adam, though, we quickly find ourselves back with the sin metaphors. My next project after the steps of wonder is to wage fierce battle against the noxious overgrowth of buckthorn that lines my property. Buckthorn is an invasive species and therefore—can’t help it—a perfect metaphor for the worst kind of wickedness—at first it seems like such a good idea (what a nice privacy hedge!), but it’s fast-growing, luxuriant, intractable, and will gladly and determinedly suffocate anything wholesome living nearby.

I’m getting more steely-eyed and determined every day in my righteous anger against buckthorn, but satisfying my wrath won’t be easy. “This kind does not go out except by prayer and fasting.” That’s code, I’m pretty sure, for chain saws and herbicide.