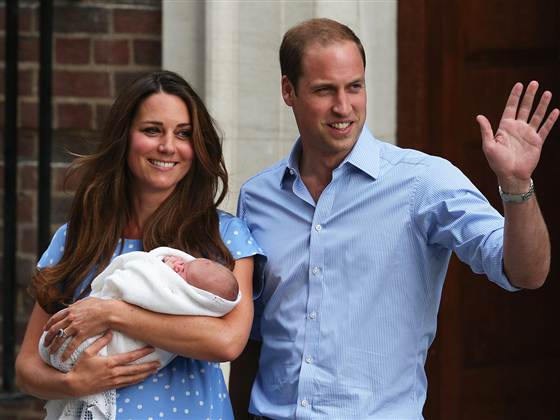 I have endured some condescending eyerolling this week, aimed my way because I showed moderate interest in the birth of the royal baby. The two men with whom I live (one husband, one teenage son) took the line “Babies are born every day. Big deal.” I have not bothered to argue. One cannot make certain people understand about certain things.

At one point, the older of the two party-poopers muttered remarks about celebrities and how little he cares about them, which can’t be completely true because I know for a fact that he has followed Lindsay Lohan’s tragic antics over the years as she descended from “she’s an adorable and talented child actress” to “OK, now she’s hot” to “oh boy, here comes the slut factor” and now all the way down to “whoa, that woman gots some drug years on ‘er.” I only know about Lindsay Lohan’s tragic antics because this particular celebrity-downfall-follower-in-denial has regularly reported them to me. So there.

Despite the periodic Lohan reports, I actually know very little about celebrities—only what I can gather from two minutes in the grocery check-out line here and there. I guess Brad Pitt is married to Angelina Jolie—or was? And they adopted an assortment of babies from Sierra Leone or something? Honestly, I have no idea. I don’t care. So what’s different about the British royals then? Why did I check the web about once an hour the day that Kate was in labor? Why did I follow the “what will they name the baby” thread on my Google newsfeed? Why have I recorded the Oprah Winfrey Network show that conveniently aired last night, William, Kate, and the Royal Baby?

I suppose I could explain my interest in the royals (which, I stress, is moderate, and not by any means obsessive) by referring to my professional obligation. That is to say, since I teach early modern British literature—which is heavily populated with English kings, queens, and other people who find themselves in possession of castles, or at least country houses with extensive grounds—I must keep up on British royals gossip in order to stay professionally relevant. This would be a fine argument, except that it is silly and untrue.

Well, I am clearly not the only one interested, for no rational reason, in British royal developments. All the world is breathless, the media tells me. Why? Let’s float some general theories about their appeal.

Everyone wishes they were young, rich, and glamorous. So by following Will’s and Kate’s adventures, we live vicariously through them: gallivanting from castle to country home to chateaux in France (careful!), riding polo ponies, touring the world. And these two are so cute! Wills is not my type, really, but never mind: every fellow looks smart in a full-dress military uniform. Kate is full-on gorgeous, not to mention classy (despite sneering among some Brits about her former commoner status). Plus she gets to wear interesting hats. For this theory to hold, however, one has to overlook the fact that being a royal is a job that requires a wearisome schedule of appearances at ceremonial events, which must be terribly boring even if the food is good. And then there’s the cameras. That poor woman was obliged to emerge only one day after giving birth—hair done, makeup perfect, darling dress, wedge heels—in order to face: the cameras. Eesh.

This is a deeper, slightly more mystical version of option 1. We cannot help but be fascinated with kings and queens and princes and princesses because these figures register deep in the collective unconscious. Royal figures are universal symbols of human potential for nobility and greatness, and as such represent us all. Hence, we watch eagerly as the world’s most famous actual royals pass through the great milestones of life: childhood, courtship, marriage, and now babies.

I might actually buy this one a little bit. It helps that Wills and Kate seem to want to play their roles properly. They are roles, I acknowledge. Who knows, really, what they’re like in person? Warning about this theory, though: it’s not for those who can’t stomach the gender conservatism of archetypes.

The palace intrigue! The evil Camilla! The tragic death of Diana! Maybe we follow the royals because they’re creating an interesting story. The last forty years of British royalty tales would make a great multi-generational, multi-volume series of novels—or made-for-TV dramas. But it’s all true! And thanks to their bloodline, the Windsors have no choice but to have their story broadcast live around the world. Like The Truman Show, except they know about the cameras, and they wear hats.

This is your more Marxist analysis. Americans are supposed to be a classless society and find the aristocracy revolting and yada yada, but in fact we are fascinated by inherited titles and privileges. We secretly love the idea of “superior” bloodlines. And servants. This also helps explain the American obsession with Downton Abbey.

I think class fascination might be why American celebrities do not intrigue me much. Some of them just try to practice their craft or whatever, but so often they display childishness, shallowness, and worst of all, bad taste. They are completely ungrounded in tradition. They have no sense of duty or obligation. It’s shocking, I tell you. At least the royals imagine themselves as public servants and try to represent something larger than themselves. Maybe that’s an illusion, but it’s better than unfettered caprice and narcissism.

By the way, if you’re disgusted, as many Brits are, with Windsors as royal moochers upon British taxpayers, read this. Apparently, it’s more complicated than that.

The royal family owns some very handsome horses. Who can resist well-groomed, glossy horses with all the trimmings? I mean, an argument could be made for royals obsession on this basis alone.

Take your pick of these theories. Or add your own! Or give up. It is difficult to explain any obsession (or: moderate interest). Despite many attempts by eloquent and intelligent writers, for example, no one has succeeded in explaining fully the now waning but once widespread American condition of baseball obsession. Or the current cultural obsession with zombies and vampires. Lots of good theories out there for both of these, but somehow the obsession exceeds the reach of the theories, don’t you think?

At least, perhaps, someone can explain to me why my teenage son—the same one who sneers at my (mild) interest in the royal baby—came home from music camp obsessed not so much with jazz (the ostensible purpose of camp) as with this card-collector game, Magic: The Gathering. The fellow camper who introduced my son to the game made a point of apologizing to me when I picked up my kid. “It’s my fault,” he said sheepishly. Several days and several excursions to the game shop in the mall later, I understand why he made this confession.

Well fine. My son can go fiddle with his Magicky cards. Meanwhile, I will go watch that show on my DVR about what life might possibly be like, based on the opinion of the best experts who are very close to the royals, for the new Prince George.