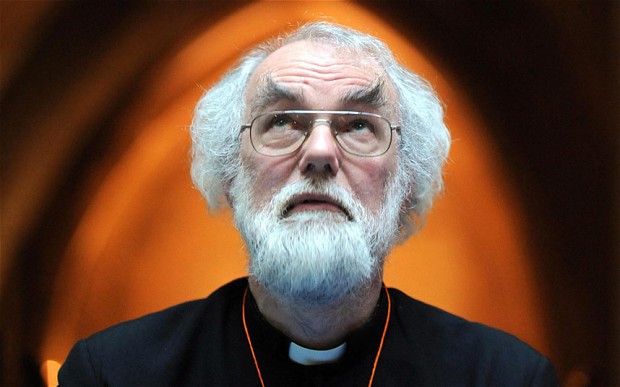 “Yeah, it’s really good, but read it when you’re wide awake.” My husband sent me a link—and that warning—at about ten p.m. the other night. The warning felt like a dare, so of course I dove right in.

The link was to a lecture by Rowan Williams called “The Body’s Grace.” It had churned to the surface in Ron’s social media feed in the aftermath of the CRC and RCA synodical tempests last month. Williams delivered the talk in 1989 in a lecture series sponsored by the UK-based Lesbian and Gay Christian Movement. The lecture was then collected in Theology and Sexuality, an anthology edited by UNC-Greensboro ethicist Eugene Rogers. Rogers called the lecture “the best 10 pages written about sexuality in the twentieth century.”

I don’t know if Rogers was right in his assessment, but Ron was certainly right to warn me about reading-while-drowsy. This is a Rowan Williamsy piece of writing: dense, theoretical, subtle, erudite, and generative of further reflection. Williams—who until 2012 was Archbishop of Canterbury—mentions no fewer than three writers, four philosophers, and five passages of Scripture in a tight, 6000-word space.

I definitely recommend brewing up a pot of strong coffee and reading through the piece yourself. But wouldn’t it be nice to have a dumbed-down version, with commentary, by your elbow as you read? An executive summary of sorts? A very loosey-goosey paraphrase that doesn’t do the work justice but, on the other hand, could be browsed casually on your phone while bouncing along on a bus?

Well, here you go. I did my best. Bold sentences are Williams’ main points, regular type indicates summarized subpoints, and my own commentary is marked in italics.

Trying to get human sexuality right is a “doomed task.” Let’s just admit that from the start.

We experience sexuality as inevitably both comic and tragic. We can find our bodies in situations that make us look very foolish, and we can also get deeply damaged. If we start by admitting that, we might get more quickly to our need for grace.

(At this point, Williams goes into a loooooooong disquisition on a series of four novels by Paul Scott. Frankly, you can skip this part, unless you’ve read the novels, which no one has. He works through these novels to pull out the phrase “the body’s grace.” Fine.)

Before we get to the body part, let’s define grace. Grace is a transformation through which we see ourselves as desired, significant, wanted.

This is what we were created for. Creation, Incarnation, Christian community—these are meant to be ways that we are invited into the loving communion of the Trinity, so that we truly understand ourselves to be “the occasion of joy.”

Commentary: I guess this is the flip side of the Westminster Shorter Catechism opener. What is the chief end of human beings: To be loved by God and receive the grace of being enjoyed by God forever. OK!

Here’s the ideal for sexual intimacy: to be caught up in this larger project of grace. This requires that each partner be transformed by the other’s desire. The body communicates, “I perceive you, and you are a joy to me,” and that communication transforms the receiver of it. It’s mutual.

A couple things to break down here. 1) The body, in sexual actions, communicates. 2) This business has to be mutual. That means that the desire has to be perceived. And welcomed. And reciprocated. Each element is important. 3) That entails risk and vulnerability in both parties. 4) Desiring/being desired in this way is a transformative grace: it makes us feel significant, loved.

Here are some things that are NOT about grace, then.

“Solitary sexual activity” may release tension, but it’s not about this business of being perceived and transformed. So not much about grace.

Anytime there is a power differential, we are not talking about grace. In fact, we might be talking about perversion, as in rape, pedophilia, etc. This is because when one agent has control, that person takes no risk and does not have to “wait upon the desire of the other.”

Commentary: Williams doesn’t mention here the ethical complications of seduction and consent, but a lot more could be done on these areas, as any college student will tell you after first-year orientation workshops on rape prevention. Caroline Simon has a good chapter on seduction in her Bringing Sex Into Focus (IVP, 2012) but, as I say, this is a needed area of further reflection. OK, back to you, Rowan…

“Sex is just what two consenting people do with their bodies for fun.” Not good enough. You are just using each other with permission. That’s not being vulnerable to grace.

“Sex is just the body. My inner life is what matters.” You’re kidding yourself if you think you can detach inner and outer, personal and political like that.

Commentary: It’s interesting to imagine responding to these latter two supposedly “victimless” moralities not simply by saying, “Well, that’s a sin,” (although I think those attitudes do represent sin), but by saying, “That’s not good enough. That does not respect and honor human possibility enough.” This way of speaking about it might be more legible to people for whom “sin” is not a genuine category.

We are positing a high aspiration for sexual ethics here, and that means just following rules is not good enough.

Let’s admit that there are a lot of really bad heterosexual marriages. Sure, they’re “within the bounds.” It’s a man and woman, and they have social sanction for their sexual union. But does their sexual life enter into grace? Is it mutual and transformative for each person? That’s a serious question.

Let’s sum this up.

“The moral question … ought to be one of how much we want our sexual activity to communicate, how much we want it to display a breadth of human possibility and a sense of the body’s capacity to heal and enlarge the life of other subjects.”

Commentary: Yes, it’s crucial that we don’t let heterosexual marriage off the hook just because it “follows the rules.” As if we have no need to challenge people within marriage toward a high view of their sexual life. Neglecting this is a great way to overlook abuse, or to disillusion people who do everything “right” and then find their sexual lives disappointing or under resourced with either information or wisdom.

So how do we create a context for making sex this meaningful and grace-filled? A key answer is: time.

Look, this is not easy. We’re always risking the comic and tragic. But you don’t get grace without risk. So we need to create a context of commitment, where people can trust each other enough to get vulnerable.

A public bond to mark this commitment is important and necessary. We need everyone to acknowledge “Hey, you two are working on this thing together and we’ll support that.” But the license itself is not enough to ensure grace.

Meanwhile, we ought to admit the truth that people actually do find this grace outside legal licensure. To pretend that they don’t, or to label such a relationship is automatically nothing but sin, sin, sin is just not recognizing reality.

Let’s remember that sexual grace is ultimately about a relationship with God.

“To be formed in our humanity by the loving delight of another is an experience whose contours we can identify most clearly and hopefully if we have also learned or are learning about being the object of the causeless loving delight of God, being the object of God’s love for God through incorporation into the community of God’s Spirit and the taking-on of the identity of God’s child.”

Commentary: I think that means that a really good marriage teaches us about being loved by God. Got it.

Celibacy is a serious calling and gift and not to be forced on people.

Celibacy is also about the body’s grace, but celibates find that grace wholly in God. Not everyone can do this! Didja’ever notice that celibates are not the ones insisting that gay people must be celibate?

One reason people freak out over same-sex sexuality is that it forces us to think about the purpose of desire as such. Scary!

We have justified and avoided talking much about the comedy and danger and discomfort of sexuality by noting that we need it for procreation. However, when we consider sexuality apart from that, when it’s just about desire and joy, then we need an ethics and purpose of desire and joy. And that’s complicated!

The question is, what do we do with “non-functional joy,” where the result is not children, where it’s a “joy whose ‘material production’ [recognizable product, result] is an embodied person aware of grace”?

Scripture’s approach to the purpose and meaning of sexuality can’t be reduced to a few proof texts.

Here, Williams very briefly explores the idea of mutual vulnerability in Scripture, citing metaphors for God’s relationship to God’s people as well as passages directly on sexuality. He calls for more work in this area. (His call has been heeded, thankfully, by people like James Brownson, whose Bible, Gender, Sexuality [Eerdmans 2013] mentions this lecture admiringly.)

“Decisions about sexual lifestyle are about how much we want our bodily selves to mean rather than what emotional needs we’re meeting or what laws we’re satisfying.”

Williams outlines a very high aspiration for human sexuality. It’s a vision for the larger purpose of grace, a vision that transcends rules and boundaries without nullifying the need for them.

People want rules. This is why so many in the church are clamoring for “a decision on the issue.” This is why the RCA called an extra-synodical “Special Council” this past summer. It’s why that poor CRC synodical committee has a five-year mission “to provide concise yet clear ethical guidance for what constitutes a holy and healthy Christian sexual life.” Good luck, people. As Kate Kooyman pointed out in her post last month, that mandate doesn’t even begin to get into the complexities that need to be addressed to provide real guidance to embodied people in actual situations.

People want rules, because we like to know who’s right and who’s wrong. And sometimes we really do want to do the right thing for the right reason. But rules are dangerous without a vision. I think Williams’ best contribution in this lecture is to say “not good enough” to our rules. It’s not good enough to conclude, as so many people want to do: If you follow the rules, thumbs up! If you step outside the rules, sin sin sin! That is the definition of legalism. It’s fair to say that when it comes to legalism, Jesus is not a fan.

Rules are about meeting standards. Wisdom is about aspiring toward a vision. Rules are easy to explain, though, and that’s why people want them. Wisdom is harder. No synodical committee is going to get us there.