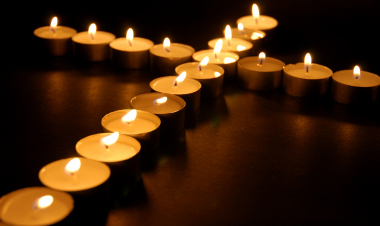 It would be easy to scoff. Her website says she’s a “Life-Cycle Celebrant®.” Note the registered trademark. She is ready to help you mark the significant passages of your life—wedding, funeral, coming of age, pet adoption—with a ritual that she will design specifically for you and whatever loved ones you care to have in attendance. This ritual will reflect your beliefs, your history, your particular story.

It will cost you a fee, but don’t worry, she’s certified. She has graduated from the Celebrant Foundation & Institute™. Note the trademark. She has taken seven months of online courses, costing her $2400, and she pays her annual dues of $175 for her official certification. She’s part of an international network of Life-Cycle Celebrants!

The CF&I website assures aspiring celebrants that “Our engaging, online classes are taught by experienced Celebrant Faculty who provide students with a balanced curriculum of ceremonial theory and thorough real-life business practice.” Theory and business practice. You’re in good hands.

I mean, honestly. How narcissistic is a personally designed ritual? How deep and significant can it be if it was made up this week? Toss together few strands of red yarn, a couple candles, some balloons, a gong, and ta-da! You are marking significant life passages with reference to the numinous! You are spiritual but not religious and you are doing just fine!

It would be easy to scoff, but truthfully, I’m jealous.

That is to say, I recognize that Life-Cycle Celebrants operate where the church has failed. They even say so, respectfully and gently, on their website: “Recent Pew Studies reveal that a growing number of people aren’t connected to a specific religion and many are not religious at all, but still may consider themselves spiritual or secular. Life-Cycle Celebrants® offer an alternative, giving people of all backgrounds, traditions, cultures and faiths the opportunity to create ceremonies that best reflect their beliefs and ideals.”

People drift away from traditional religions for many reasons, and I don’t want to get into the subtleties of secularization theories here. The practical outcome of this drift, however, is that the “nones” have nowhere to go for rituals to mark the important transitions of life. Here’s what my friend Doug Gay, a professor of worship at the University of Glasgow, writes about the situation in Scotland, where the “nones” are 52 percent of the population:

[L]ike most of their peers across Europe, the rising generation of young Scots is embarked on a massive social and psychological experiment into how far it will be able to negotiate life—birth and death, suffering and celebration, beauty and cruelty, joy and despair—without the challenges and consolations of religion. How far will it be able to craft satisfying and meaningful new rituals and ceremonies to mark life transitions? What kind of story or stories will it tell itself about who it is and where it has come from and will these stories prove to be ‘thick’ enough to offer the depth of meaning and inspiration which the Christian story has over many centuries?

People who leave the church may enter a ritual-less life, but I wonder if one of the many reasons people drift away from traditional religions is that we have failed at ritual.

This may be true especially of the Protestant church. Allow me to be reductive and unfair for a moment. In too many Protestant churches, worship is a concert and a lecture. Infant baptism amounts to a long theological disquisition followed by an anemic sprinkle. Communion is a rare and thin encounter with “shot glasses on a hubcap” (as one of my Presbyterian friends describes it) also preceded by a long theological disquisition. Or no explanation at all, in which case no one quite understands the point.

Meanwhile, ministers in the Reformed church are reporting with some dismay that new members are requesting to be re-baptized because they “don’t remember” their infant baptism. They want a ritual, naturally, and those Baptists have a “better” one. I agree that theologically we should say no to such requests, but what have we got to offer to answer that human need?

And what about other life passages? I bet you have been to terrible church weddings and worse church funerals. Or how about coming of age? Roman Catholics have first communion for younger kids, Jews have bar and bat mitzvahs. The Protestant church: confirmation. A class and a certificate, a few awkward moments of standing in front of the congregation in a worship service. Our coming-of-age ritual thus says absolutely nothing about the body—a rather abiding concern for adolescents, one might guess—and this sends the message that the church has nothing to say about the body except: don’t.

I could go on, but here’s my proposal. We need ritual renewal. Not just liturgical renewal and enriched sacramental practice—which I’m all for—but a renewal of the ways we mark life passages in the Christian community. The church has the best story into which we can usher people’s personal journeys. Best because it’s true. But we’re not going to usher people into that mystery through a spectacular show, or through moralistic foot-stamping in the public square. We might, however, be able to sneak people back into the church—and help keep them there—through really good ritual.

On the way to that, maybe we can learn a few things from these Life-Cycle Celebrant people. They are reminding us: 1) Modern people need rituals that connect them to the transcendent. This need is urgent enough that they will seek such rituals out apart from traditional religion. 2) Rituals have to be embodied, not all up in the head. 3) Rituals need to make personal connections, not be merely traditional and standardized. 4) There’s room for creativity, even playfulness.

People attempting ritual outside the church are stuck with the merely personal, the pastiche, the co-opted-from-someone-else’s-tradition, the made-it-up-yesterday. People inside the church are sometimes stuck with thin, inadequate rituals or, on the other extreme, inexplicably fussy repetitions never connected to their personal stories. Or nothing at all to mark key passages of life.

When my kids were born, I wanted a ritual for the blessing of a newborn infant and parents. When they reached adolescence, I wished for a Christian coming-of-age ritual that honors but does not obsess about the body. I have a friend who longs for a service of forgiveness, release, and new beginning after a divorce. Some people want “pet blessings,” and some churches do them. And here’s a lovely idea: an organization called Threshold Choir will send a small group to sing comfortingly for the ill and dying.

So many places in life where people need ritual; it’s human nature. Ritual places into a bigger story the transitional moments of our lives, moments confusingly tangled with grief, fear, excitement, change. The most effective rituals are shared in an enduring community, clear in their meaning-making, connected to history, and embodied. They involve mind, spirit, emotions, and the senses.

The problem is, “individualized ritual” is a bit of a contradiction in terms. Rituals have meaning in community. So I wonder: How could Reformed churches embed the good word-resources we have into more fully embodied rituals? How can we develop and share theologically responsible, historically informed life-cycle rituals adapted to the contemporary context? How can we draw from the treasures of Christian history and practice to answer this need with creative and holy wisdom?