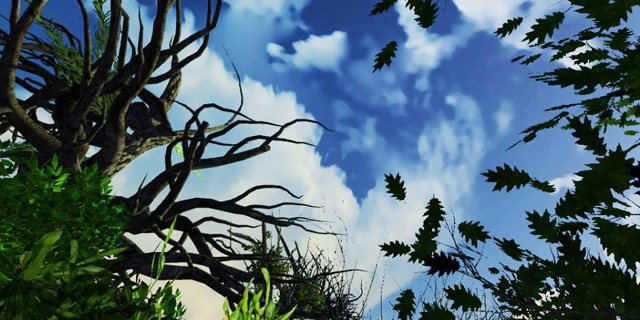 English has always been a hungry language: it readily devours words from other languages and from inventive word-crafters, assimilating new words into its own rich, varied vocabulary. English never seems to lose its appetite for new morsels, borrowed or fresh. These days, in response to accelerating climate change, people are experiencing feelings for which English does not supply quite the precise terms, at least according to Australian environmental studies professor and philosopher, Glenn A. Albrecht.

So Albrecht is proposing to remedy this situation by making up new words, assembling them mostly from familiar Latin and Greek roots. He has coined the term psychoterratic, for example, to describe the range of human psychological responses to place. The feelings you experience as you turn off an exit on the highway toward your home neighborhood, or walk through a sun-warmed wildflower meadow, or relax as you listen to the rilling of a river, or recall the farm where you spent your childhood, or longingly plan a visit to an ocean beach you’ve never seen—those are all psychoterratic responses.

Let’s see if some of Albrecht’s other linguistic inventions awaken something for you. (These terms are presented on his blog, except as noted.)

Eutierra. The way your heart lifts when you reach the end of the dirt road, and the silky horizon where the lake meets the sky comes into view, and you smell the water and the sun shimmers diamonds on the lake’s wrinkled, restless surface. The way your body melts as you lie down on the warm sand while the whush of the waves envelops every other sound. The way your breath catches when you crest the next rise on the wooded trail and emerge into sky, smacked with a vista of the undulating, spruce-shaggy valley below. You are feeling a “positive feeling of oneness with the earth and its life forces.”

Psychoterratic dis-ease. You feel this as you drive down the busiest big-box shopping street in town, with its riotous tangle of lighted signs and power lines and roaring traffic and potholed parking lots spreading from lot line to lot line. Or every day in your neighborhood, as you walk past trashed empty lots and boarded up businesses and weedy, pathetic yards in front of sagging porches. Psychoterratic dis-ease hits when your environment is ugly and hostile and causes you stress.

Or maybe you’re sick. Somaterratic illness describes what happens when you live close to factories or mining operations that pollute the water and air and cause high rates of asthma, cancer, lead poisoning. You are poor, of course, and do not have the means to escape these ruined environs. Or you are suffering from heat stress or malnutrition or both because though your ancestors have lived on this land for ages, now it’s under water, or too dry, or it alternates wildly between the two, or it’s too close to a coast that is disappearing under a rising ocean. This is not your fault, but you suffer the consequences.

Solastalgia. This is about grief, a “melancholia or homesickness” for the way a place used to be. Grandpa’s voluptuous garden, formerly kaleidoscopic with vegetables and flowers, was neglected by the next homeowner, and is now nothing but thistles and garlic mustard. The wetland where you used to spend quiet hours watching herons lift, their stilt-legs dangling, is now a Wal-Mart. Pine beetles transformed the verdant mountain slopes into an upright cemetery of brown tree corpses; fires blackened chapparal-laced hills and devastated homes into ashy rubble; island homelands seem to be sinking under a rising sea. The solace you once felt in your home place has evaporated, replaced by hopeless desolation. Hopeless because you have no power to change anything about it.

Kenopsia. This is the “eerie, forlorn atmosphere of a place that’s usually bustling with people but is now abandoned.” A place usually full of people seems “hyper-empty” when the people are gone. I wonder if we could apply this term to nonhuman absences, too. Because of species extinctions already behind us, coral reefs and ponds and forests have gone quieter, emptier: kenopsiac, you might say. If we manage to make this planet uninhabitable for humans, will the animals that do survive feel kenopsia? (This term is not from Albrecht, but from the Dictionary of Obscure Sorrows.)

Perhaps to prevent the worst outcomes of human carelessness and neglect, we need to get in touch with our terranascient emotions. These are the feelings that drive us to care for our places well. To study, to work, to practice restraint, to build community around habits that nourish places and souls at once: to renew and rebuild. You’re a poor farmer whose traditional practices no longer work, so drawing on hope and determination, you learn how to use vermicomposting to improve yield and enrich rather than deplete the soil with each harvest. You’re a landowner who works with neighbors and businesses upstream to eliminate the pollution that affects everyone along the river and to repopulate the eroded banks with native plants. You’re propelled by a longing for flourishing.

To make a lasting difference, you also need soliphilia, the “love of working with other people to save loved places at all scales.” Caring for place requires fellow feeling, love for neighbor, an abiding concern for the common good, the stamina to work together over the long term. Idolizing property rights, privacy, and autonomy to the neglect of a wholistic and future-oriented view abandons us to the worst results of our selfish impulses. We are going to need to draw on solidarity and love.

If we can find soliphilia, we might be able to usher in the Symbiocene, an emerging era in which humans finally accept the reality that, ultimately, we all live or die together. Humans have become so powerful that we can destroy ourselves and the planet, quickly or slowly, one way or the other. Can we alter our lifeways so that instead we “live together for mutual benefit”? Humans and creatures, humans and soil, humans and oceans and lakes and rivers?

Doxecological. I made this one up myself. It describes a motivation for the work of earth-healing that arises from the Scriptures, especially the Psalms: “Praise the Lord from the earth, you great sea creatures and all ocean depths.” Lightning and hail, mountains and hills, wild animals and cattle, princes and maidens—all that hath breath is created for praise. Doxecology is striving for the mutual flourishing of humans and creatures for the praise and glory of the Creator. Soli deo gloria, amen.

Prof. Albrecht, who seems to extrude new terms as smoothly as a pasta machine, has a book coming out in May with Cornell Press. It’s called Earth Emotions, and will list and define dozens more terms besides the ones described here. I first learned of him through the podcast Mothers of Invention, which features women leaders working innovatively toward a new way of caring for the planet. Episode 1.4, “Under the Weather,” features Dr. Anne Poelina, a Nyikina Warrwa Traditional Custodian and academic from Western Australia. She mentioned the term solastalgia on the podcast, and that sent me off on a research tear. Image by artist Eric Filion.