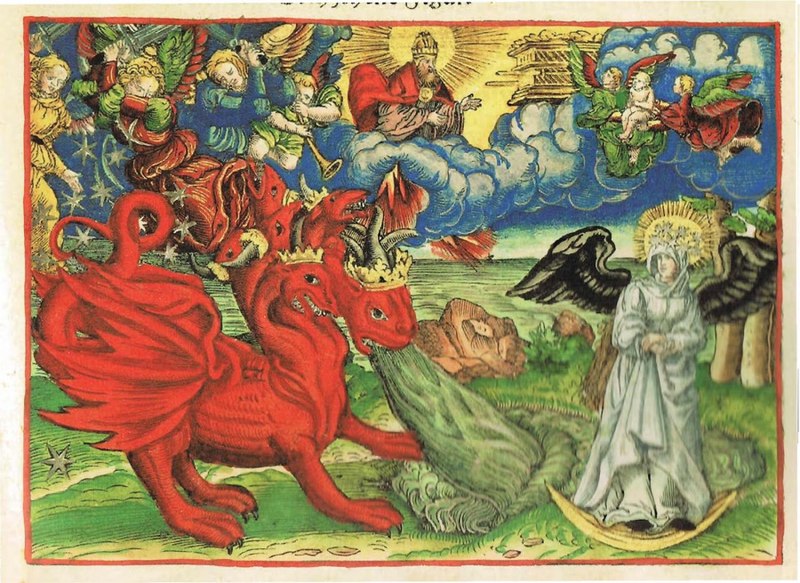 Good news, bad news. The good news is that tomorrow is Pentecost, so we get to sing Spirit-centric songs and think about exciting things like rushing wind, tongues of flame, and sudden outbreaks of multilingualism. The bad news is that after tomorrow, the liturgical year enters a looooooong stretch of “Ordinary Time.” Which means nothing exciting will happen, liturgically speaking anyway, until Advent.

There are traditional ways to cope. Back in ye olden tymes, every day was some saint’s day or other, so there was a fair chance this long expanse of liturgical doldrums could be broken up with the occasional macabre martyr story involving burning oil or decapitation. Then there’s the more contemporary American strategy of conflating the church year with the consumer economy year, so that Ordinary Time is nicely punctuated with appliance sales and Hallmark holidays. And of course, there’s always Vacation Bible School to keep summer church services lively with constant pleas for volunteers in the six weeks before, followed the week after by small children performing adorable songs with hand motions in the Sunday service.

Nothing against the delights of VBS, but Ordinary Time lasts a strenuous 33 weeks. So I’m thinking we need a more comprehensive strategy. My own church has made up a bunch of what I guess we could call sub-seasons to divide up the time. We stretch out Pentecost into a season, we’ve tried “kingdom season” and “Trinity season.” We even have a “say nothing that doesn’t come from a Psalm” liturgy, which, come to think of it, would also make a great improv game.

Anyway, we can do more. Since the Advent-to-Pentecost cycle focuses on the life and work of Christ from Annunciation to sending the Spirit, I figure there are still plenty of other biblical stories and passages that could do with a lot more attention. Here are some ideas.

Ancient Israel season
Take advantage of summer camping enthusiasm to derive spiritual lessons from Israel’s nomadic life. Begin with Ten Plagues Sunday (we’ll need some new songs for that) and then spend several weeks complaining during congregational prayer time and serving only quail and “manna” for the after-service coffee time. Advantage: gluten free and paleo. After Jordan Sunday (a good day for baptisms, or canoeing, or both), we could observe Jericho Sunday, when the congregation’s trumpeters dust off their instruments (idle since Easter morning) and help inspire the little kids to reprise their Palm Sunday skills and march around the church—or better yet, around a rival church. Sunday school lessons could focus on pagan idols: “Kids, this week’s craft is Play-doh Asherah poles.” Also, someone will have to design a snake-on-a-stick for the sanctuary.

Song of Songs season
June is full of weddings anyway, so this season would provide the perfect opportunity for budget-minded couples: just get the wedding over with during the Sunday service. The lectionary texts will already be tantalizingly sexy, and you can plop the boring vow part between the sermon and the concluding hymn and zip right through it. Done and dusted! In fact, why not batch the summer’s weddings and get ‘em all done on one Sunday? Imagine the expense and aggravation saved! Reception menu: recently thawed sandwich cookies and the kind of lemonade that comes in gallon jugs.

Weird prophet season
Prophets and their oddball ways do not get enough love in the traditional liturgical year. Apart from a few juicy Isaiah quotes in Advent, how often do we incorporate plumb lines and ax heads, head-shaving and jar-smashing into worship? Lots of related craft project opportunities, including the chance for the high school youth group to graffiti ominous warnings on the walls.

Legalism season
Some churches do their best to avoid talking about Levitical laws or the more obscurely precise instructions in the New Testament, but is that faithful to Scripture? Is it? Well then. What better way to appreciate Christian freedom than to spend several weeks each year completely denying it? Post elder/inspectors at every church door and make sure no one wears a wool/linen blend or ripped jeans or has a skin disease. You’ll have to quiz women on their monthly cycles and monitor their pearls and braids. Men: no man buns (I Cor. 11:14).

Ecclesiastes season
In late fall we tend to feel moody and nostalgic anyway, so why not draw that into worship for a few weeks? I’m imagining litanies wherein, no matter what the leader says, the congregation responds: “So what? Nothing matters anyway.” After services, ease that glum apathy with potlucks in which worshipers can eat, drink, and be merry. Or at least try, while thinking of imminent mortality.

Imprecatory Psalm season
Oh just get it out of your system. Go ahead. It’s OK. You’re righteous, they’re wicked. It will all be revealed.

Apocalypse season
Speaking of revelation, we could easily spend a few weeks getting into the psychedelic weirdness of the last book of the Bible. I realize some churches have arranged their worship life so that it’s basically apocalypse season all year, but others of us, despite the second-coming thematics of Advent, generally try to tiptoe around the weird stuff. Time to hit those cringe-worthy middle chapters, then. Lots of potential for ritual actions: pouring out bowls, arranging lampstands, cracking open seals, blowing trumpets (keep those brass players busy). Urge the worship band to turn up the amps and use distortion pedals—you know they’ve always wanted to. And remember the dragon! Get the middle schoolers to build a Chinese-festival-style dragon and use it to chase a new mother through the sanctuary.

Well, if all that doesn’t liven up Ordinary Time, I don’t know what else to tell you. I suppose another way to approach this season is to accept that a lot of our days are ordinary, so maybe a good chunk of our church year should be, too. I would like to try quail, though.