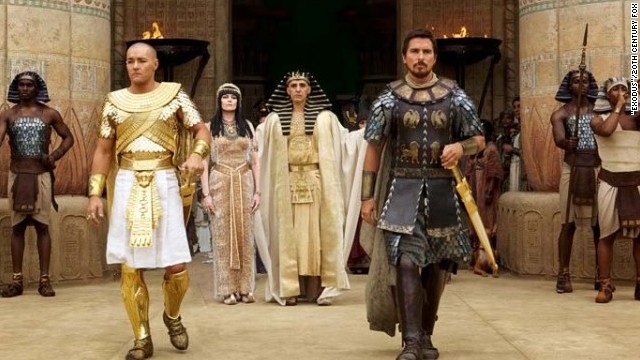 Director Ridley Scott had me at the thundering hooves. I should not have enjoyed the two-and-a-half hours I spent watching Exodus: Gods and Kings—there are so many things wrong with it. But who can resist cast-of-thousands battle scenes, Egyptian palace intrigue swathed in gold lamé, and disaster-movie-style CGI set pieces, one of which involves frogs? Well not me.

I went to see Exodus: Gods and Kings despite the criticism of its exasperatingly racist casting. Scott (Alien, Gladiator) brushed off the criticism by claiming he was merely facing market realities: after all, no one would finance a film with dark-skinned leads. In response to this… let’s call it cowardice, some were calling for boycotts of the film, and perhaps rightly so. But I went anyway because my curiosity got the best of me. I wanted to see how a Hollywood filmmaker would tell this story today, and what we might learn from it about where we are, as a culture, with God.

I’ll tell you where we are with movie-making: in good shape. Cinematographer Dariusz Wolski sweeps effortlessly across the vast grandeur of Egypt, with pan shots of a convincing Memphis and a visually exciting opening action sequence where the Egyptians deploy their might cinematically against the Hittites. There’s plenty of chariot-and-horse action throughout the film, as well as beautifully shot rock-and-rubble landscapes to serve as bleak backgrounds to the human/divine drama.

The opening battle sequence establishes the central human tension as a rivalry between Moses (Christian Bale) and his “brother” Ramses (Joel Edgerton). This Moses, we soon realize, is quite the swashbuckling action hero (Scott didn’t make Gladiator for nothing). Ramses, however: not so much. Back at the palace after the battle, we discover that Ramses’ father, Pharaoh Seti (John Turturro), is a civilized ruler—we can tell from his British accent. Unfortunately for his son, he openly acknowledges that Moses is better suited to lead Egypt. Ah. So we are going to attribute the psychological development of the tyrant of Exodus to: father issues.

This could easily have turned to eye-rolling silliness, but Bale and Edgerton managed to draw me into the pathos of their relationship from beginning to end. From their bro-like ease in the early scenes to their final standoff, they remain layered characters whose actions seem both plausible and tragic. Edgerton’s performance especially impressed me. This is a very human Ramses; behind his eventual cruelty and obsession, we always see his crippling sense of inadequacy. How can he compete with the gruff, plain-speaking, ever-capable Moses?

Nevertheless, where the film stumbles, it’s usually in those interior intrigue scenes. For example, do we really need Sigourney Weaver to play Seti’s wife? She looks and sounds completely ridiculous, as if she wandered in from another set, plopped a Cleopatra headdress on and slipped in behind a potted palm. Another scene, in which Ramses demands the truth about Moses’ origins, is a nonsensical mess. Unfortunately, it’s one of only two scenes featuring Miriam. The other, in which Moses parts from his Egyptian mother, is effective enough, but that’s the end of Miriam’s role in this story. She stays in Egypt.

What little interest the writers (Adam Cooper, Bill Collage, Jeffrey Caine, and Steven Zaillian) spend on women is almost all lavished on Moses’ Midianite wife, Zipporah (Maria Velverde), over whose gorgeous face the camera lingers adoringly. Her role in the story is, it seems, to help us relate to Moses as an enlightened, postmodern man. He’s an egalitarian husband who politely requests consent before consummating their marriage. And he’s a religious skeptic, too. When son Gershom is old enough to demonstrate that he sounds like an English schoolboy (the child of nomadic shepherds? why?), Moses recommends to him a little healthy religious skepticism. Zipporah scolds Moses for this, but he replies, “Is it bad to grow up believing in yourself?” Ugh.

Thank goodness the burning bush scene comes next. Before we see any fire, though, Moses gets caught in an avalanche and winds up buried in mud with nothing but his face exposed. It’s visually striking, and there’s something fittingly Hebraic about it, too. To encounter God, Moses is reduced to adamah, a mud creature, with only his face turned to the holy. In his delirium he envisions the burning bush, and God appears to him as: an English schoolboy.

Why? Because it’s unexpected? As an ironic counterweight to the might of Egypt? Or because Moses, and perhaps we, might see the God of the Exodus story as petulant and impulsive? Or perhaps as an emphatic answer to the booming-voiced, almighty God of Cecil B. DeMille’s The Ten Commandments? We’re left to ponder this as Moses, bewildered but definitely no longer agnostic, returns to Egypt.

Whatever the reasons for depicting God (or the angel of God?) this way, subsequent encounters between Moses and God/Schoolboy highlight the tussle of wills between them. Once Moses gets a rebel insurrection going among the Hebrew slaves, it’s clear that a few explosions are not going to get the job done. During their next rocky-hillside encounter, God advises Moses that he’s not moving fast enough.

“Why are you in such a hurry after waiting 400 years?” Moses wonders.

Good question. But it isn’t answered. Instead, Moses asks what to do next, and God says, “For now, you can watch.”

Then comes some real movie fun. The plague sequence is fabulous gross-out stuff culled from every disaster/sci-fi/horror movie you can think of: Jaws-style chomping crocodiles; swirling, ominous skies; frogs squelching in Mrs. Ramses’ bed; a marketplace swarming with flies; even a truly silly moment in which a Scottish-accented (?) Egyptian biologist (?) attempts to explain the sequence of plagues to the court, their faces covered in fly-netting.

It’s fun to watch, but what are we to make of this battle between God and Pharaoh? In the Jewish and Christian understanding of this story, it’s obvious: Pharaoh is the big bad tyrant, and God displays his mighty power on behalf of his suffering people. The film does confirm this understanding, but we are allowed to interrogate it.

During the final plague, we watch sympathetically as Ramses’ precious infant son quietly dies. The next morning, Ramses comes face to face with Moses. “Is this your God,” Ramses asks, “a killer of children?” For a moment, we savor the ironies. Pharaohs, too, have killed children. God, in this movie, looks like a boy. “What kind of fanatics worship such a god?” Ramses persists. It’s a good question. Maybe the best one the movie asks.

The final sequence, the escape through the sea, involves more cinematic splendor complete with over-the-top score, but we never lose the human drama. The parallels between Moses and Ramses persist right into the ginormous wall of water that overcomes them both. They each emerge on opposite sides of the sea, and we’re left to wonder: is the difference between them not much more than this: that Moses is God’s chosen?

In the concluding scenes, the narrative falters, as if Scott isn’t entirely sure what story he’s telling. But in a way, that’s what I appreciated about this film—besides the frogs and chariots and avalanches, I mean. I expected a predictable tale in which we glory in the superior power of a kick-ass God who rescues his band of ragtag underdogs. But nothing is quite that clear and easy. Instead, we are allowed to let the story be a story, raising questions, leaving enigmas to ponder.

In one of the final scenes, Moses chisels away at the first tablet of the law, enjoying the friendly hospitality of the English Schoolboy, serving tea in his cave parlor. “You don’t always agree with me,” God remarks. “Nor you me,” Moses retorts. God replies: “Yet here we are.”