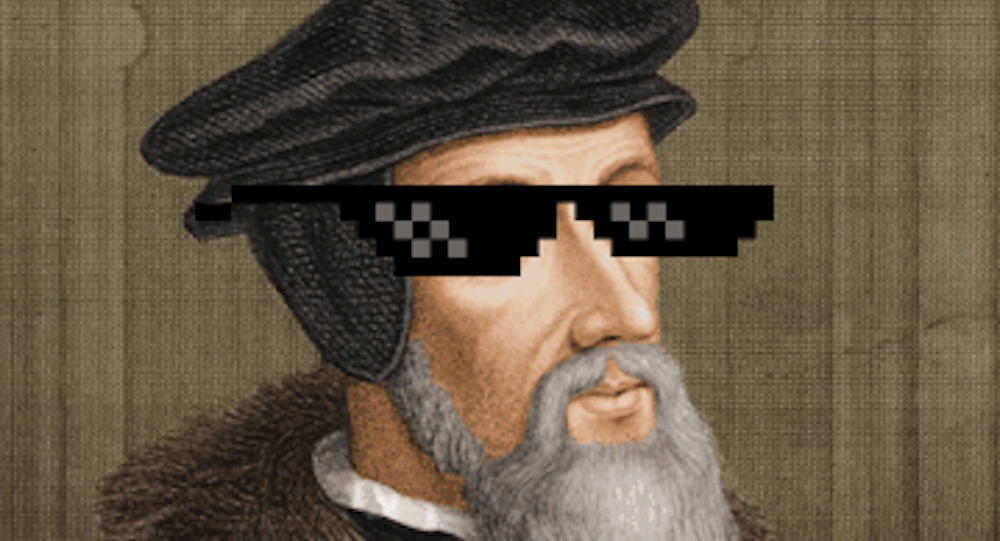 Soon this blog [The Twelve blog] will be celebrating its tenth anniversary—on the eve of Reformation Day, naturally. You can expect some hoopla fitting to that august occasion, but for now, I thought it might be useful to reflect on the meaning of “Reformed.” No doubt those who have been watching the RCA General Synod and its aftermath are actively pondering the ongoing dilemma of what being Reformed actually entails.

I agree that establishing precise definitions can be a tiresome exercise. Normally I do not go in much for definitions; I usually just intuit my way through. And when it comes to religious groups, efforts to define—as we know all too well—are often thinly disguised efforts to divide.

So let’s call this an exercise in religio-anthropological observation. A kind of disambiguation attempt.

Some years ago, searching for ways to explain to new faculty at Calvin University (then college) what kind of bizarre world they had gotten themselves into at this “Reformed liberal arts college,” I came across a clarifying blog post by a guy named Aaron Blumer, who graduated from Bob Jones U and identifies as a Baptist—and he’s a very perceptive one, as it turns out.

Blumer rightly points out that “Reformed” is a big and varied category and can’t possibly mean only one thing. Then, to lay some groundwork, he throws some shade at Roman Catholics and gives a severely truncated sketch of the Reformation (space is tight: I get it). But next he offers five helpful headings to consider—five levels of Reformed-ness, we might say.

2. Worship. This one is a little murky in my view. As examples of Reformed worship style, Blumer mentions creeds, litanies, lectionary use, liturgical calendar observances, and weekly communion. Scholars of Reformed worship and those faithful servants who put together official denominational worship resources (remember those?) might use terms like “Service of Word and Sacrament” and “covenant renewal” to describe proper Reformed worship–some of them would anyway. But do even historically Reformed churches actually engage in these supposedly Reformed worship practices? Alas, no. Worship practices in self-proclaimed Reformed churches are all over the board, and have never been entirely consistent. These days, a lot of Reformed churches have adopted the song set/teaching/song set pattern, which does not follow the underlying structure of Word/Sacrament at all. You can sense my own bias here.

3. Eschatology. Do the words “rapture” or “millennial” come up in your view of the end times? No? Then you might qualify as Reformed. Reformed eschatology is anti-dispensationalist, as Blumer notes. He describes Reformed eschatology with the wonderful term “panmillennialist (It’ll all pan out in the end—that is, ‘Let’s just not fuss over the details’).” Love it. He also mentions covenant theology here, but more on that in a moment.

4. Ecclesiology. Reformed churches operate with a presbyterian governance system and practice infant baptism. (We could argue that infant baptism actually fits under soteriology, but let’s set that aside for now.) Reformed congregations are officially accountable to elders and then to larger classes and synods (or the equivalent). This is a messy, slow, frustrating system, but it’s better—in my view—than an entirely congregational system, which is dangerously vulnerable to charismatic (small c) and abusive leaders. Some branches of Reformed church tradition rejected the episcopal system, too, perhaps similarly fearing putting too much power in church officials’ hands.

But honestly, every system is flawed and fraught and difficult (see: total depravity). The histories of the RCA and CRC could both be described as long exercises in the tension between accountability to others and the urge to go off on your own. The recent RCA General Synod is a case in point: The RCA has decided to stay together, but numerous churches will split off anyway. Living together is very, very difficult.

5. History. Blumer ends with a respectful nod to lineage. Does your church’s denomination trace its roots to the Reformation itself? Right back to Calvin? Do you still have some engagement with the sixteenth-century Reformed Confessions? Well, then, you pass this test, too. If you go back to Luther, that’s cool, but that makes you Lutheran rather than—technically—Reformed. As examples of historically Reformed denominations, Blumer gives a shout-out to Presbyterians and even specifically to the CRC.

So this is one possible way to parse some distinctions. Maybe we can call Blumer’s five headings the “Reformed Quintilateral” to correspond with the “Bebbington Quadrilateral” long used to define the term Evangelical. (Recently, Baylor professor Barry Hankins has proposed the “Du Mez Patrilateral” as a replacement for ol’ Bebbington, as a hat tip to Kristin Du Mez’s analysis of White American Evangelicalism’s actual cultural expression.)

In any case, Blumer suggests that people who only qualify under headings 1 and 2, just for the sake of clarity, should probably stop calling themselves Reformed. I agree. I want to say to these people: Get your own term! Stop confusing our “brand”!

But that’s ridiculous, and I don’t mean it. It’s not my job to police terms and I don’t care that much about litmus tests of Reformed purity. The church is far too messy and dynamic to enforce rigid categories. The Reformed expression of Christianity is a worldwide phenomenon and hardly monolithic or static. Maybe it’s impossible, in the end, to reach a satisfying definition.

And yet, here on this blog, connected to The Reformed Journal and embedded in two historically Reformed denominations, we continue to use the term. What do we mean?

Well, that’s a question we’ve always wrestled with and will never stop. I’d like to believe that here, in this space, being Reformed has a kind of feel to it. We combine rigorous intellectual inquiry with lived, faithful, spiritual practice. The Bible is the book we live by and love, but also wrestle with. We engage “the world” rather than running from it. We care about holiness but we are not rigid or brittle. We resist easy dualisms. We’re serious, but we try to maintain humility and a sense of humor because, honestly, we all fail and God is faithful and grace is lavish and beautiful. We long for God’s shalom for all people, all creation. Our job is to witness to God’s work, join into it, wherever we are gifted to perceive it.

Blumer is right that covenant theology is at the heart of a Reformed ethos. God is the covenant maker and we enter that covenant by grace. You can’t escape or kick people out of a covenant God establishes. Moreover, people get grafted into that covenant all the time. It’s not ours to define or defend.

This has interesting implications for keeping a denomination together and including newcomers. Several of the RCA General Synod delegates who have blogged for us over the last few days have used the metaphor of family. Is the RCA—or any denomination—a family? Sure, in all the dimensions of that metaphor, including the ones we least desire. People know each other, they have ties, they have a shared history. Some don’t get along well. We have to hold each accountable even when it’s very uncomfortable. There’s patience and forgiveness, but also estrangement. There’s fear and anger and people say mean things and people get hurt, sometimes deeply and permanently. New people join and add their stories to the group! Families grow and shrink, spin off new families, reunite or lose touch. We have lots of cousins! Some we like a lot, others we would rather not be related to but we are anyway.

I’m very glad the RCA has decided to stay together, whatever that will end up meaning. I’m very glad that the spirit at Synod, according to reports on this blog, was irenic and pastoral for the most part, even between those who wish to stay in the house, as it were, and those who wish to go out on their own and establish new households. What holds a denomination together is hard to discern—agreement? On what, though? That’s always been the question. And what does “together” even mean?

All Protestant denominations are already splits of splits of splits. They’re accommodations—meaningful ones but precarious and provisional. They hold stories and create a manageable scale of togetherness. But they’re not equivalents of the great covenant of God’s grace. All the ins and outs of denominations and Christian subcategories and labels and definitions—all the details we fuss over—are secondary to the great mystery of God, a mystery into which we all long to be received.