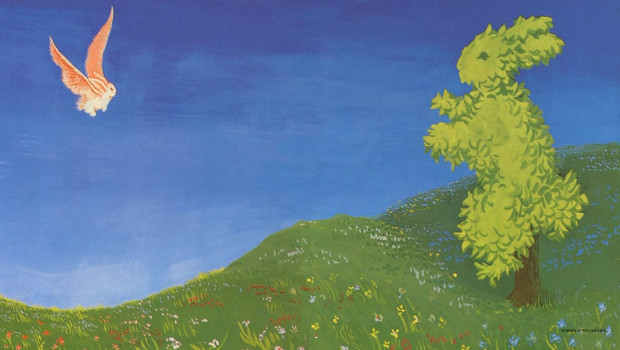 Children’s Classics Updated for the Age of Climate Chaos

The Long Winter, Laura Ingalls Wilder
The Ingalls family struggles to keep their leaky, makeshift house dry through months of heavy rains and extreme flooding. Along with the other Dakota Territory settlers, they’ve already eaten through the wheat they saved from the previous summer’s harvest, which was pathetic due to record-high temperatures and drought. Unfortunately, trains can’t come through with relief supplies because the tracks are now submerged under several feet of water.

So Pa and Laura take turns patching the roof and shoring up the eroding foundation with hastily twisted bundles of hay.

“Yes,” agreed Mary. “And good thing the cow keeled over from heat stroke. There is always something to be grateful for.”

“But all this rain after those wildfires last summer!” Laura contradicted. “The Big Slough is now the Very, Very Big Slough.”

Meanwhile, Almanzo and his friend put on their waders, determined to trudge miles to a nearby homestead where—rumor has it—a neighbor has a supply of antibiotics needed to ward off the bacterial infections everyone is getting from the swampy conditions.

Charlotte’s Web, EB White
Because extreme weather events prompt selection “for more aggressive colony phenotypes” in spiders, Charlotte the spider is one cranky mama. Her friend Wilbur the pig has nothing to worry about from ol’ farmer Zuckerman, because Charlotte weaves anti-meat-eating messages into her web, such as “Go vegan, scum!” Eventually, Zuckerman learns to prize Wilbur’s appetite—and excrement—as part of his farm’s sustainability and composting program. When fall comes, before Charlotte dies, she passes on her aggressive traits to her egg sac containing thousands of spider babies. When the babies hatch the next spring, Fern sits on her little stool, watching them swarm the barn, and remarks, “Well, this is one ‘angry spiderpocalypse.’”

The Wizard of Oz, L. Frank Baum
Dorothy gets good and tired of landing in Oz every time there’s a stupid tornado—and the number of tornadoes seems to be increasing every summer. Fed up, she buys a condo in Oz so at least she can be comfortable there. Fortunately, the higher UV levels don’t bother her because she’s already learned to wear protective eyewear. Dorothy eventually convinces the Wicked Witch of the West that her sister-witch’s unfortunate squashing was caused by an extreme weather event, and the Wicked Witch explains to Dorothy that the wizard is not only a fraud but also a climate change denier. The two team up to overthrow the wizard and convert Oz to renewable energy. The tin man learns to lubricate his joints with vegetable-based oils, the cowardly lion finds his courage and leads a campaign against coal mining, and the scarecrow uses his brains to work on carbon capture technology. The flying monkeys get jobs installing wind turbines.

The Wind in the Willows, Kenneth Grahame
Mole, Rat, and Badger at last convince Toad to relinquish his passion for gasoline-powered motorcars and instead get himself an electric. Meanwhile, after some research into the causes of erratic behavior among toads, the sensible Badger diagnoses toad with chytrid fungus. In order to avoid further “amphibian decline,” the friends agree to abandon the old Toad Hall to the weasels and stoats and move up the river. On a sunny afternoon, they together install solar panels on the new, LEED-certified Toad Hall and settle down to live there together. Mole organizes a rota so they can take turns with cleaning chores. (Also, this.)

The Lion, the Witch, and the Wardrobe, CS Lewis
The White Witch can’t sustain the whole “always winter and never Christmas” thing because temperatures are too warm year-round in Narnia these days. Instead, she terrorizes the critters in her kingdom by developing commercial real estate or mining operations on their habitats or hunting them to extinction. Just to be nasty, she saves the last specimen of every species, turning it to stone for display in her castle sculpture garden. Lucy, Peter, Susan, and Edmund start a habitat restoration movement, but soon Edmund is lured into betraying them by the witch’s promises of major profits from tar sands oil extraction. Eventually Aslan appears, pays with his life for Edmund’s treason, defeats the witch, rebalances the climate, and restores all the extinct species, including the talking ones.

Little Women, Louisa May Alcott
Marmee and the four sisters are already used to deprivation, so they adjust without complaint to the breakdown of industrialized agriculture and the demise of a centralized electrical grid. The family gets by on vegetables from the garden and they recycle old dresses into rugs. Fortunately, they’re not so cold in the winter anymore. Unfortunately, warmer winters contribute to an explosion in the tick population near their Concord home. Thus, Beth still dies, but this time of untreated Lyme disease. Heartbroken, Jo writes a book about sustainable gardening and organic pest control.

The Very Hungry Caterpillar, Eric Carle
In the light of the moon a little egg lay on a leaf. Actually billions of eggs. Because warmer winter temperatures did not kill off as many eggs as usual. One Sunday morning the warm sun came up and—pop!—out of all those eggs came billions of tiny and very hungry forest tent caterpillars. They started to look for some food. And by the time they were finished, they had completely defoliated an entire forest. Again.

The Runaway Bunny, Margaret Wise Brown
Once there was a little bunny who wanted to run away. So he said to his mother, “I am running away!” “If you run away,” said his mother, “I will come along. Because our homeland is now far too hot and drought-ridden for our people to raise enough food to survive.” “Shucks,” said the little bunny, “I guess we are now climate refugees.” And so they were.