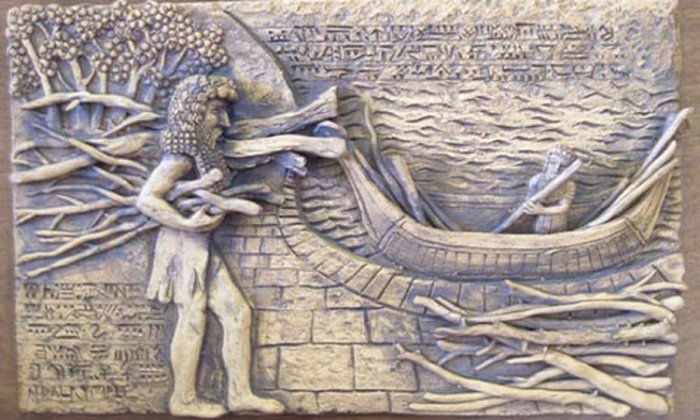 Word of the Lord, Thanks Be to God

It’s disturbing to recognize that in the Noah story, God does the same sort of thing that the Babylonian gods do in their flood story.”

That’s what she said, this bold and thoughtful student in world lit class.

We had been pondering the flood story in the ancient Sumerian/Babylonian epic Gilgamesh, sorting out the differences from the Genesis version of the flood story. For instance, the Gilgamesh version involves squabbling gods who don’t all know what’s going on. The reason the god Enlil causes the flood is ambiguous, although it seems to be a population-thinning scheme and perhaps a noise-reduction measure? The Noah figure—called Utanapishtim—takes aboard the ark not only animals, but seeds, treasure, all his relatives, and a crew of craftsman (a smart idea, when you think about it). After the flood, as a sort of apology for his ordeal, the gods grant Utanapishtim and his wife immortality.

The manuscripts (more precisely: tablets) of Gilgamesh are older than the oldest Genesis manuscripts, so I had asked the class: What do we do with that knowledge? How can we claim the Bible is special when this flood story comes in other, older versions?

Students offered varied responses, one of which involved an effort to rescue inerrancy, so I did a whole song and dance, writing the words “inerrancy,” “infallibility,” “inspiration,” and “facticity” on the board. I explained the distinctions among these terms, the problematic nature of expecting facticity from ancient Near Eastern literature, etc., and tried to convince them that reading other flood stories and creation stories actually helps us understand and love the Bible better—because we become more familiar with the genres of literature the Bible draws upon, and then we can notice the riveting distinctions. I mean, look at the Genesis story again now: Here we have not a squabbling pantheon, but one God, a God who cares about righteousness! A God who is—to cite the words of another student—deliberate, sovereign, and knowledgeable! A God with a concern for human flourishing and a plan of salvation!

I was on a roll, preaching quite a sermon. Finally, I paused: All right, comments? Thoughts? What are you all thinking? That’s when our bold and thoughtful student made her observation, the subtext of which was this: I hear what you’re saying, professor, but God still destroys the world in a flood.

We were all a little sobered for a moment. However you stack up the “facticity” of Genesis, any version of inspiration contends that we have the stories God meant us to have. And in this story that God meant us to have, God grieves over the wickedness of human beings and sets out to destroy virtually all of them in a vast ecological devastation.

Since, as a professor, I can always come up with some next thing to say, I went into another miniature disquisition. You’re absolutely right, I replied to the student. When we learn this story as little kids, we focus on the cute animals and the cute ark and God’s faithfulness and the nice rainbow. The story does not offer details about screams of terror, bloated human corpses, the destruction of habitats, all the decaying flesh when the waters subside—and neither do we. Genesis 7:21-23 notes, somewhat emphatically, that every living thing died in the flood—except what was on the ark. But we don’t emphasize that part in Sunday school. We don’t often admit that this is, all in all, a terrifying story.

Yes, it teaches us about the justice of God, the sovereignty of God, the covenant promises of God, the grief of God—even the way God sees to the need for refugia amid disaster. But it’s still terrifying. And that’s why (I was still yammering on at this point) we read the Old Testament through the lens of the New Testament, in the light of Christ, because as John 1 says, God the only Son, the Word, exegetes the father, long sweep of salvation history, and so on and so forth.

I gave the right answer, I suppose, but I doubt any of us were entirely satisfied. I know I wasn’t.  The fact is, God in Genesis destroys the world with a flood, just like the Babylonian gods do in Gilgamesh. There’s no getting around that, no matter how many rainbows we spot in the sky.

It all made me think about those moments in church when the scripture for the day is read, and the reader concludes: “This is the Word of the Lord.” And we are supposed to respond, “Thanks be to God.”

Sometimes, when the lectionary delivers to us some brutal conquest of Canaan or some terrible passage of judgment in Jeremiah, or even some harsh word of rebuke from Jesus, we’re not sure we feel especially grateful. When my kids were younger and a passage like this was read in church, my family would sometimes offer our liturgical reply with a quiet question mark: “Thanks be to God?” And then we would smirk at each other down the row.

We have the stories God meant us to have. Some of them bring us into bracing encounter with a sovereign and mysterious God. In other ancient epics, the “machinery” (as it’s called) depicts divine forces quarreling and cooperating, councilling and scheming, influencing human affairs in capricious ways. It was a means, for ancient people, of grappling with the puzzling question of why things happen. In the Bible, all that “machinery” is rolled up into a single divine character, the one, true God, whose character, we testify is “slow to anger and abounding in steadfast love.” That is our faith—but the stories are complex, and in the end, we are still grappling with mystery.

Of course, the flood story is only one piece of the huge, overarching biblical narrative with all its miscellany of genres. We read Genesis 6-9, and any other difficult passage, understanding that we are only looking at one piece. Maybe, in that light, it would help on certain Sundays to revise our liturgical response like this:

“This is the Word of the Lord.”
“Thanks be to God—for the full sweep of salvation history from which this terrifying text is only a fragment.”

Good luck getting a congregation to say that. I had a hard enough time trying merely to gesture toward the idea in a twenty-minute classroom discussion.

Nevertheless, “thanks be to God” is the right response to any portion of Scripture. God gave us the stories we are meant to have, and God expects us to ponder, grapple, cherish, resist, surrender, and let them shape our imaginations. That’s what I intend to do. What the rabbi says about the Torah, I would say about the whole Bible: “Turn it, and turn it, for everything is in it. Reflect on it and grow old and gray with it. Don’t turn from it, for nothing is better than it.”