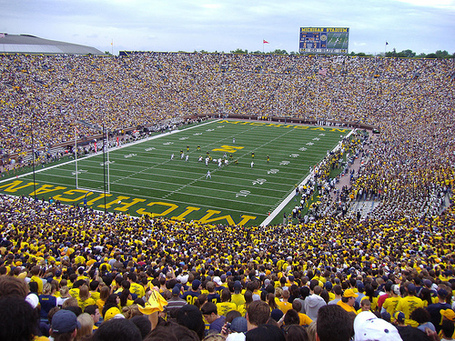 “Football is a Religion and Saturday is the Holy Day of Obligation.”
— Bob Ufer (the voice of Michigan football 1945-76)

In the van on the way there, I wind up sitting in the way-back with my twelve-year-old niece. She is hopelessly bored, fiddling with her phone while the grownups discuss my college’s cuts to arts programs, the difficulties faced by arts organizations, recent discoveries concerning Pluto and Mars, and e-sports. Later we listen to the Eagles because my sixteen-year-old son wants to learn about music from “before the turn of the century,” by which he means the year 2000. My sister-in-law and her husband sing along with gusto, being of pre-century vintage themselves. They are both Northwestern fans, Janelle having graduated from Northwestern’s theater program. They are the purple-clad heretics in our two-van caravan of maize-and-blue Wolverine faithful.

Traffic thickens as we approached Ann Arbor. Once in town, we inch our way through the labyrinth of streets, gawking out the window at the front-yard pre-game parties—undergraduates playing beer pong, tossing footballs, rejoicing in their youth and avoiding their homework. I see one young woman swig straight-up from what appears to be a vodka bottle.

We park one of our vans in a makeshift parking lot far from the stadium. Every possible corner in Ann Arbor becomes a makeshift parking lot on game day—for a price. We gather blankets and jackets and set out across a golf course toward the other van’s parking spot, where we plan to tailgate. A gorgeous autumn day! Perfect for football: mostly sunny, mid-sixties. We plod along, crest a hill and… behold! A vast host spreads before us, like a color-coordinated refugee camp. The university turns its golf course—how do they manage this?—into a revenue-producing party scene, selling tailgaters a spot near the stadium for $40 a vehicle. Trucks, SUVs, vans wind row after row, neatly aligned along the fairways.

Pilgrims from all tribes and nations gather on camp chairs under their portable awnings, the trunks of their vehicles flung open and the contents tumbled out in a cornucopia of pre-game fun. Some people clearly have invested in specialized gear: slick little portable grills made to look like Michigan helmets that open clamshell-style, reusable Michigan-themed plastic table settings, generators to run the electrical. One truck had arrived pulling a large, enclosed trailer painted with Michigan slogans, out of which the folks had pulled a 72-inch TV.

Families eat and laugh and toss footballs and frisbees. Little kids scamper on the open fairways and greens. I hear one older man tell another, proudly, “I paid $120!” probably referring to his game tickets. The smell of sun on grass, meat on grills. Everyone, of every age, sports a Michigan shirt if not full-on, head-to-toe regalia. A few stray people wear Northwestern purple, but no one seems to mind. Every adult has a beer in hand. Lots of drinking equals lots of peeing, so there are long lines at the banks of porta-potties. Car stereos boom out a cacophony of music or radio broadcasts of other games. One truck is kitted out with a loudspeaker, out of which pours the voice of former Coach Bo Schembechler, like a revival preacher on repeat, delivering his famous 1983 pre-game speech: “the team, the team, the team!”

When the time comes, we follow the crowd to the Big House, the temple, the holy place. No need to know which direction to go. You join the streaming throngs. Friendly older folks greet us as we enter the stadium. They volunteer, just for the thrill of being at the Big House, and they welcome our purple relatives with equally friendly fervor.

After a great deal of fuss over where, exactly, our seats are, and much clumping over the cement stands and around each other, we settle our butts on the tiny spaces our tickets bought for each of us. Because our 78-year-old dad is with us, we invested beforehand in stadium-approved seat pads with backs, so we perch on those and wait for the game to begin.

The stadium is surreal in its dimensions: 110,452 fans encircle one field. The population of a decent-sized city. And yet the place feels almost cozy as we unite in purpose and spirit. This is what people love about the Big House. As Michigan football chronicler John U. Bacon says, referring to the spirit of unity created among fans, “If you put your fist in the air on ‘hail,’ you’re one of us.”

Pre-game rituals proceed apace and then its time for kickoff. Miraculously, on the kickoff return, Michigan scores! The return man sprints right toward us into the end zone. The marching band hasn’t even gotten itself arranged in the stands yet after their pre-game tootling, so they scramble to play the fight song in celebration. Then its three-and-out for the Wildcats, and Michigan scores again on their next possession. We settle in for an easy win.

There’s so much to watch! I’m enjoying a game with no blaring advertisements interrupting it, and no commentary layered over it—though I normally appreciate sports broadcasting with its distinctive idioms and tropes and other linguistic curiosities. Here the commentary comes from the fans around me. The guy behind us is a med-school student interested in genetics. He also knows a lot about football, and he chatters with my brother-in-law about the bubble screen and the nickel defense. No one is drinking: booze isn’t allowed. Everyone is watching the game keenly. This is Michigan! People care, and they know the game.

My other brother-in-law brought binoculars, so I get to spend a little time peering through them. The play itself is interesting. Ooof, that blitz was rough. Wait, who carried on that play? Oh, look at the cheerleaders! There are four full sets of them, some of them more acrobatic types, others more balletic. The dancer-cheerleaders are wearing the slightest of skin-colored slippers, and at one break in the game, they create a circle and leap in sync like nymphs. Even without the binoculars, if I miss the intricacies of a play, I can watch the replay on the gargantu-tron screen.

At half time, more pageantry. The marching band with its huge rat-a-tat drum corps is joined today by—get this—the New York Philharmonic brass section, no doubt in town for a concert at Hill Auditorium last night. Don’t worry, they’re not marching, just raising their horns along the 50-yard-line and playing through arranged selections by Verdi, Wagner, and Beethoven. It’s homecoming weekend, so the announcer has a series of things to honor today, including (of course) previous athletics champions, veterans of the armed services, but also luminaries of the arts at the university. Apparently, the theater department is celebrating 100 years, and conductor emeritus Dr. George Shirley received a National Medal of Arts from President Obama last month.

More marching band, more swirling flags, and we’re back to football. The sun has sunk beneath the stands behind us, the temperature has cooled, and Northwestern has been 3rd and 17 on so many possessions that the Michigan faithful are fully relaxed. Except for these dratted rock-hard seats. Despite our little seatpads and all the popping up to see exciting moments, I’m missing my big couch at home. But then comes: the WAVE! A few times around gets us going, then we do the slow wave, the super-fast wave, the reverse, the criss-cross. Ripples of bright maize, folks in good-natured harmony.

A Northwestern player is knocked out cold at the end of the 3rd quarter. Long minutes go by, the medical crew hovers, his team creeps onto the field to see. Eventually he sits up, the whole crowd applauds him. He rides out slowly on a cart. Without benefit of broadcasters and their team of researchers and producers, we don’t get much news about whether he’s going to be OK.

By the 4th quarter, in reverse pilgrimage, those of more nominal faith begin to file back up the steps to beat the traffic home. We stay to the end of course, and we’re rewarded with another TD in the end zone directly below us. Final score: 38-0.

Now, more patience as we climb the concrete steps back out. A stadium, a town, does not disgorge 110,000 people easily. People are all business, speeding across the plaza in all directions toward their cars and home.

We find our vans in the dark. Other people pull out immediately, a few break out the grill again to wait for traffic to clear. Getting out of Ann Arbor, you have to know what you’re doing. We don’t, so we get turned around several times by police who long ago figured out where to put the barriers to prevent hopeless traffic tangles.

Eventually, we make our way to a highway headed west. No chatter in the car now. I watch a Shakespeare play on an ipad. Just like during my undergrad days, I go right back to homework after the game. Ron and Philip listen to music. Nephew Gabe konks out. Josh and Mia fiddle with their phones in the way-back. Everyone’s tired when we get home. We unpack the cars, say goodnight, head to bed.

All along, as I enjoyed this pilgrimage day, I wondered: is this a religion? My family went through an expensive, day-long ordeal for this, and so did an unbelievable number of others. I was impressed with the people who clearly have this routine down. They have season tickets, they tailgate for every home game. I’ve puttered along the far edges of this Michigan football mania since my undergrad days almost 30 years ago, so to some extent, I get it. The loyal fans, the uniting of diverse peoples into one tribe, the temple itself, the traditions and rituals, the pageantry and worship, the scorn for enemy “gods,” the ordered channeling of archetypal passions, even the intellectual interest in the various intricacies of the cult.

The close resemblance to religious practices is undeniable.

Jamie Smith would almost certainly describe our day as a secular liturgy. In Desiring the Kingdom, he observes that “liturgies are ritual practices that function as pedagogies of ultimate desire,” they “want to determine what we love ultimately.” Our rituals were indeed pedagogical: one could see that from the many kids who are being raised as Michigan fans. My nephew has decorated his entire room in maize and blue. And he lives in Chicago. But ultimate desire?

Meh. I don’t know. Relatively affluent Americans are willing to shell out big bucks, lots of time, and complex logistical feats for a lot of different entertainment experiences. Football is one great excuse, among many others, to spend a day having a good time. For how many of those regular people is football the ultimate desire? Maybe a few. Certainly the university officials and network execs for whom this cult makes millions.

Anyway, not for me. It was fun. But I don’t need to make a pilgrimage again for another ten years.

We went to church the next morning as usual, a far better pilgrimage. I’m glad, however, that we have an eleven-o’clock service at my church, because I sure needed to sleep in.