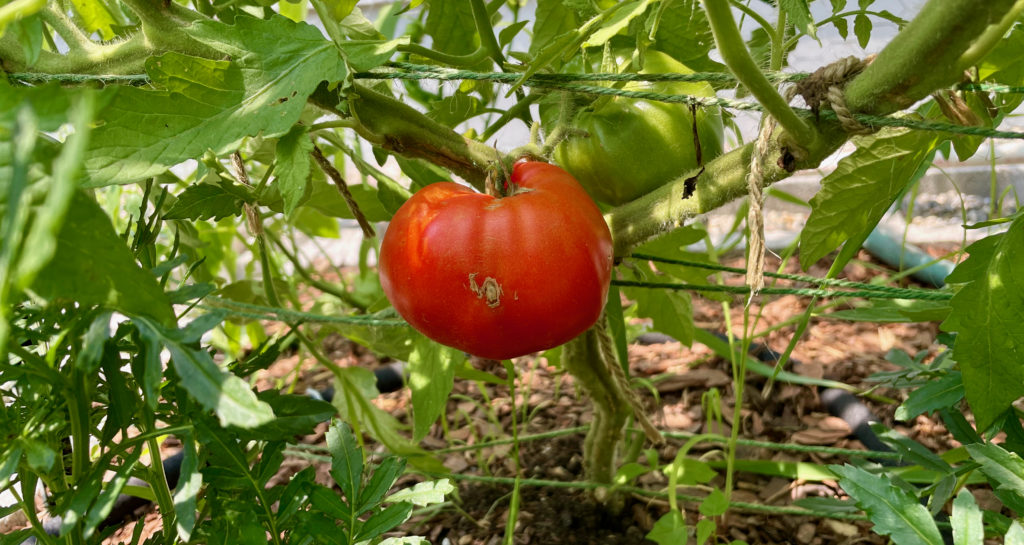 “With 10,000 to 15,000 known varieties of tomatoes worldwide, there is no shortage of new varieties to try.” — The Old Farmers Almanac

This summer, I tried four varieties. Well, five, but I’ll get to that. Last March, I decided to start tomatoes from seed, a nutty notion I will chalk up to the sort of thing that appears in one’s mind during a pandemic. I’ve attempted tomatoes before, but never from seed. My neighbor, Linda, inspired me, though, having been teaching herself seed starting and vegetable gardening for a few seasons now.

Neither Linda nor I learned to garden as kids. In fact, it’s fair to say my parents were against gardening. “Why would you spend money on that?” I can hear my mother say. My parents’ half-acre yard was a spread of turf grass and a few sturdy shade trees, embellished by juniper shrubs. That was it. Not a flower blooming or veg plant vegging anywhere, ever—except for one half-flat of annuals my mom planted each summer around “the rock” on the patio. For Mom and Dad, gardening was one of those labors from which one was liberated once one reached a certain level of affluence. Thank goodness.

So I can’t quite explain why, as an adult, on whatever small “estate” I have managed (current size: one-third acre), I have labored mightily to plant as many flowering things as I could manage. Rebellion maybe. Or maybe I just really like plants. Also, these days everything I read about climate resilience strategies gets around eventually to recommending we all learn to produce some of our own food.

Anyway, encouraged by Linda, I decided this was the year to set off on a tomato odyssey. I used the seed packets she had on hand and chose Cherokee Purple, Italian Heirloom, Best Boy, and Yellow Pear. One little seedling pot each. What the heck.

How to start vegetables from seed? I had no previous knowledge on this topic. So of course, I watched YouTube videos. How people learned how to do things before YouTube, I can’t imagine. The library? Don’t make me laugh. I would have been helpless without my man Kevin on the Epic Gardening channel.

Amazingly, after a few days in my carefully curated seed-starting soil under my inexpensive but specially purchased grow lights on a shelf hastily cleared in the basement: all four tomato plants sprouted. Hooray!

“The tomato plant originated in South America but was domesticated in Central America in pre-Columbian times.” –The Oxford Companion to American Food and Drink

During tomato infancy, one must make sure to keep the lights at the right level above the seedling (you will have to keep adjusting light height) and of course one must watch out for mold on the soil. Once the seedlings are a little older, be sure to put a fan on them for a while each day so that they bulk up and get strong. Water from below! No, not from the top, are you crazy?! That will cause disease. Oh, there are many diseases that plague tomato plants. Just you wait.

And so on. It really was like raising infants, and it went on for weeks, from late March to mid-May (we’re in zone 6a). I also felt it necessary to talk to and encourage the plants every day, which I think helped. The yellow pear gave me a scare for a while there: the stem looked weird and I had to prop it up. But it survived.

While the seedlings were growing, I was studying how to build a raised bed. Lots more YouTube videos. My original plan (only vaguely conceived) involved many cedar boards and the assistance of a husband-person whose carpentry skills may not have been up to the task (no offense, dear). After pricing that plan out (holy cow! nope!), we decided instead on an ingenious design involving cement blocks, PVC pipes, and chicken wire. Happily, this plan was less costly and, as a bonus, required buying two very nifty cutting tools: one to cut the pipes and one to cut the chicken wire. Seriously, these are some nice tools.

After a weekend of work—the hardest part of which was puzzling over which PVC connector types we needed and how many—we had one fantabulous raised bed for my baby tomato plants, who were by now absolutely longing to be planted outside. I could tell. By this time, I could read their little vegetable minds.

“On average, a tomato plant can yield 10 to 30 pounds of tomatoes.” – Greenhouse Today

Once my babies were in the soil, it was time for more YouTube videos. I found “5 Tomato Growing Mistakes To Avoid” exceedingly informative. This was the year I finally cottoned onto the fundamental law of tomato plants: know your indeterminate vs. determine types. Ah. This was explanatory. Some tomato plants become nice, tidy bush-shaped plants (determinate). Most varieties, though, will vine and sprawl and create a tangled mess (indeterminate). That is why the tomatoes I had attempted in the past—purchasing them as seedlings and sticking them inexpertly in soil—that is why these tomatoes had wildly indetermined all over the place. The Epic Gardening guy explains in the “mistakes” video that for indeterminates, those little conical tomato cages are a joke. The plant will tear them to pieces. Yep. True.

Also, one has to prune. This was the year I also learned that you cannot lovingly cherish every little stem the plant pops out. Nope. Cruel to be kind, baby. Get out those pruners and go to town. Remove every sucker that grows at a forty-five degree angle from the main “leader” and the leaves. Yes, I’m serious. Every one. Cut off flowers if you have to. Just do it.

All right, then. This year I was determined to determine my plants properly with trellising and pruning. I tried the “Florida weave,” a trellising method involving metal stakes and string. This worked, but my plants started outgrowing that, too. And despite my steely-eyed pruning ambitions, those plants sprouted some magnificent suckers overnight (seemingly) and I just couldn’t bear to chop them all off. I conceded to propping a few up with extra bamboo poles and lots of string, so that my four tomato plants now look as if they are trapped in ship’s rigging. But they’re standing!

The pruning process bothers me for slightly spiritual reasons. I can’t help thinking about biblical passages in which the divine vinedresser prunes the branches he loves, etc., and so I associate pruning with God-ordained spiritual heartache or something. I want to spare my little plants any pain! Fortunately, a couple weeks ago, I volunteered at Plainsong Farm for a couple hours, and this served as a desensitizing exercise. I worked in a hoophouse (a Quonset-shaped greenhouse) on a long row of Romas. They were trellised by running the leader up a string attached to a horizontal wire about six feet up. I had to clip the untrellised top of each plant to the wire using these cool tomato-clip things, and then prune the crap out of the plant, especially at the bottom (always prune the leaves off the first foot or so of plant). After a couple hours of this violence, my soft heart hardened up nicely. I produced a thick carpet of pruned leaves and suckers between the tomato rows. And I have to admit, the plants did look a lot happier when I was finished.

“Since the late 1990s annual per capita use of tomatoes and tomato products in the United States has increased nearly 30 percent, reaching an annual total freshweight equivalent of ninety-one pounds per person by 1999.” –The Oxford Companion to American Food and Drink

So now my four tomato plants are producing like mad, and I’m faced with the problem of what to do with all these tomatoes.

“Oh, you just can them!” people say. You forget, I was raised by a mother who disdained such domestic tasks as the stuff of the dark ages out of which humanity emerged with grocery stores and credit cards. I keep picturing my mother and grandmother, up there in heaven, looking down on me and remarking to each other: “She’s crazy.” “Yeah, just wait till she tries canning. She’ll find out why women hated it.”

I’ve hesitated to try canning partly because my female ancestors haunt me, and partly because I just haven’t believed that peeling tomatoes is as easy as people claim. However, this week, faced with seven huge, ripe Italian Heirlooms at once, I thought I could at least make tomato sauce. Three separate YouTubers assure me that fresh tomato sauce will change my life.

Well, it turns out that boiling the tomatoes for one minute, then plopping them in an ice bath for one minute really does work! The skins do peel right off! With renewed faith in tomato lore, I simmered my concoction of seven pounds of chopped (peeled!) tomatoes, garlic, olive oil, and onion for a good hour, added a bunch of fresh basil (also grown from seed—did I mention that?), and spooned it over pasta. Results? It was fine. I would not say my life is changed.

More memorable were the BLTs we made last week with a gorgeous Cherokee Purple tomato. I mean, what a color! But that sandwich-y bliss might have had more to do with the crispy yet melt-in-your mouth bacon from farmer Pierre and his happy, pasture-raised pigs. That was some amazing bacon, I can tell you.

So here I am at the end of July, coping with my problematically successful harvest and figuring out all the ways to use and store tomatoes—other than canning, thank you. It looks like next on this summer’s tomato syllabus is tomato disease. The Yellow Pear is starting to get yellow, spotted leaves. Septoria leaf spot? Darn it. Back to YouTube.

Oh, about that fifth tomato variety. Years ago, I planted a Sweet 100s cherry tomato that did very well. Despite my ignorance, it produced lots of delicious little beauties. At the end of the season, I tried to gather up all the unripe or fallen tomatoes, but of course that’s impossible. The stragglers left their seeds in the ground and some of the seeds wintered over and happily sprouted. Now, every year, I get volunteer Sweet 100s. All over. So this year I transplanted one volunteer plant to the official garden bed, and staked up another one that established residence in a flower bed. They’ll deliver ripe fruit in another week or so. More tomatoes to deal with.

Is all this fuss for tomatoes worth it? That’s the question. Financially, certainly not. I could tote up the costs of that raised bed alone and probably arrive at a price of $4 per tomato or something, but let’s amortize this year’s startup costs, shall we?

Aside from the economics of it, I consider the experiment a success. Not only have I learned about tomato husbandry, but also about the relentless abundance of nature and the miracle of seeds. And for a privileged person, it’s good to experience the challenge of producing even a little of one’s own food. I realize this is all good fun when I know that nothing at all is at stake. I would not have suffered one iota if the tomatoes had not produced.

This makes me more grateful for the people who grow and harvest everything I eat. I’m also more mindful of people around the world struggling to scrape their sustenance from the soil, especially as climate change makes agriculture much harder for so many.

If surviving an apocalypse will require master farming skills, I shall perish. However, I am learning. Today I’m making a bean soup, mostly in order to use a Napa cabbage. There will be fresh, peeled tomatoes in the soup, too. Of course.