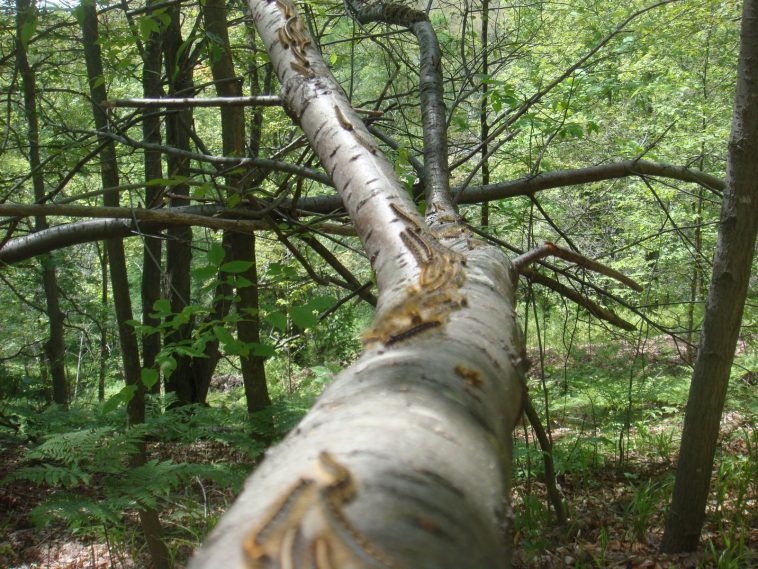 I lament summer’s end as much as the next person, but let’s admit that not everything about summer invites dreamy nostalgia. The following incident occurred in 2009, but it still haunts me.

Actually, it was the afternoon. We hopped out of the car at the trailhead to hike the Jordan River Pathway, a pleasant little winding trail through the East Jordan River watershed that was recommended to us by the nice lady behind the desk at the lodge. As we started down the trail, we heard an odd popping noise. “I wonder what that is?” I remarked cheerfully to Ron, fully engaging our junior naturalist curiosity. Then, we saw a charming little caterpillar on the trail. Awwww… isn’t that cute?

Then we saw more caterpillars, hanging out on some low-growing leaves. Well, there sure are some caterpillars around! And look at all those caterpillar tents in the trees! Golly!

Then we realized, as we hiked deeper in, that caterpillars were everywhere. On the leaves, on the trail, even hanging over the trail from little silken threads. They were writhing in large moving groups on branches crossing the trail. They were congregating slimily on certain trees, heading from one place to another on a caterpillar parkway. And from up above they were… they were dropping on us! Gross! Could that be what that plopping noise is?! Caterpillars falling onto the forest floor? Eeeuuuw!

We hiked faster. We hiked very very fast. I kept my hooded sweatshirt over my head in order to prevent ploppage in my hair. When we stopped for lunch, I did not sit down. I would have sat on caterpillars. I would have had them in my shorts.

We managed to survive a seven-mile, extremely brisk hike. Before we got into the car, we performed one last inspection for unwelcome stowaways.

When we got back to the condo, we showered thoroughly (eesh!) and then, in true junior naturalist style, we googled “tent caterpillars” on the web.

Guess what. Yeah, apparently northern Michigan was in the midst of a huge forest tent caterpillar infestation. These outbreaks occur every 10-15 years and last 2-5 seasons. Not only that, but we hit the woods (of course) just as the little buggers were finishing their eating cycle, just as they were about as big and busy and numerous as they could possibly be. The next week conditions would improve as all 3.5 trillion caterpillars—that’s my personal estimate on the population–-would be turning into moths. (Note to self: no hiking at night with flashlights until the first frost.)

There’s more. According to the Minnesota Department of Natural Resources, that plopping sound we heard was not what we thought it was:

“Anyone who has been in the woods during a FTC [forest tent caterpillar] outbreak knows not to eat an open faced peanut butter sandwich there. It might sound like rain but it’s really insect frass.”

You don’t know what the word “frass” means? Neither did we. You know, English is an amazing language. We have a special word for: caterpillar excrement!

That’s right. We spent our afternoon hiking through the woods during a once-in-a-decade caterpillar poop storm.

The good news: “This frass serves as fertilizer just like any other manure.” Oh yay. Caterpillar poop helps the ecosystem. It’s the circle of life. That totally makes up for the nightmares I had the rest of the week.

We spent the rest of our vacation lounging by the condo pool. We decided we like our nature better on TV.