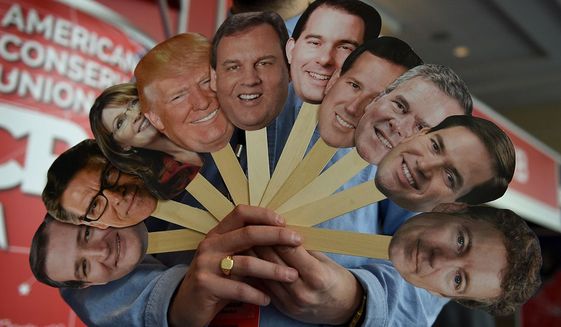 Republican Candidates Appear To Have Come To Their Senses

SIMI VALLEY, CA — “We have no firm explanation at this time.”

That was as much as Patricia Drake, spokesperson for the Ronald Reagan Foundation and Library, would say to the press in the aftermath of a mysterious phenomenon that occurred on Thursday morning. All the Republican candidates gathered, apparently spontaneously, in the lobby of the Simi Valley Marriott hotel around ten a.m. on September 17, the morning after the second Republican debate. They all appeared suddenly clear-headed and rational.

“It’s like awakening from a Rumpelstiltskin-style sleep,” remarked Ted Cruz, rubbing his eyes and still in his bathrobe. “Suddenly the past six months seem like a weird dream. Man, that was crazy-town, wasn’t it?”

The other candidates, many of them still in pajamas, similarly marveled at how everything they and their campaigns have done so far in the 2016 race now seemed oddly detached from reality. “Build a wall on the border? Mass deportations? What the heck have we been yammering on about?” blurted Cruz.

With much of the press entourage staying in the same hotel, word quickly got out about the strange awakening, and eager reporters immediately started interviewing candidates. Within minutes, all the candidates had announced the disbanding of their campaigns.

“What were we thinking?” sighed Scott Walker, who donned a teamsters cap after declaring to a Washington Post reporter that he was not only dropping out of the presidential race, but out of politics altogether. He plans to resign as soon as possible from the governorship of Wisconsin, he explained, and “follow my dream of becoming a cross-country truck driver. Those rigs are so cool!”

“I can’t believe the stuff that came out of my mouth,” lamented Ben Carson, the pediatric neurosurgeon-turned-candidate, to a reporter from the Wall Street Journal. “What the heck did I mean, ‘there’s no overwhelming science’? Sheesh!” Carson clutched a flash drive in his hand and excused himself to ring up California Governor Jerry Brown on his cell phone.

An official press conference was hastily organized for mid-afternoon Thursday to attempt to account for the abrupt shift into rationality among the candidates. CNN spokesperson Frank Carlton offered a few tentative theories: the “dry heat” of the Simi Valley climate, the upcoming “supermoon eclipse,” or perhaps “the fact that hypocrisy, self-contradiction, completely ungrounded assertions, and fear-mongering hyperbole eventually get exhausting to sustain.”

“Unfortunately, we can’t explain the exact mechanism of change,” concluded debate moderator Jake Tapper, who seemed positively giddy. “All we know is that the candidates—I mean, ex-candidates—are now exhibiting evidence-based reasoning and careful, measured rhetoric. This is certainly a welcome change.”

“Our long national nightmare is finally over,” remarked Megyn Kelly, who was on hand to cover the debate for Fox News.

When questioned behind the scenes, a member of the kitchen staff, who asked to remain anonymous, offered another theory to explain what had happened: the wine served at the pre-debate dinner.

“It was a very odd vintage,” he mused. “I’ve never seen it before, and I know my California wines. Cases of it came in Wednesday morning on an unmarked truck driven by an elderly Mexican lady who signed the bill of lading only with a big Zorro-style Z. We thought it was weird, but we figured maybe it was some security thing.”

No one on the kitchen staff could provide further information about the mystery abuela, but they admitted that they served the wine at the dinner, and that the candidates seemed to enjoy it.

“Carly Fiorina drank at least two glasses,” a server reported. “Every one of the candidates had at least one glass, including Rubio, although he also drank a LOT of water.”

Whatever caused the “miracle of Simi Valley”—as the group of relieved and now mercifully unemployed campaign managers are calling it—there’s no question that this changes the shape of the race. Where fresh Republican leadership will come from, no one knows.

“We need to end the freak show and find Republican leaders who are well-educated, of sound character, historically informed, who really understand what it means to be a conservative and—for crying out loud—have a freaking clue about basic civics,” Chris Christie insisted, still characteristically frank despite his newfound clarity. Christie said he will remain governor of New Jersey, but plans to focus on ending corruption and improving New Jersey’s air and water quality.

Jeb Bush, who was the last to announce his resignation from the race, is not ruling out running for public office again in the future. “But I am getting rid of that ridiculous exclamation point,” he mused. “I’m going to practice working with semi-colons for a while.”

Perhaps most astonishing of all was the utter silence from Donald Trump. Widely criticized for narcissism, wildly offensive insults toward immigrants and women, and total lack of knowledge about foreign policy or “his favorite book” the Bible, the bumptious billionaire refused to speak at all, even when offered a chance to make a statement at the afternoon press conference. Instead, he jotted notes to a campaign staffer, who eventually announced: “Mr. Trump is withdrawing from the race and plans to seek inner serenity. He will be leaving tomorrow morning for a monastery in Nepal.”

“Also,” the stunned staffer added, after the sober-faced Trump passed him another note, “please vaccinate your children. Thank you.”

After all the candidates’ motorcades, the press, the security, and all the staffers streamed out of Simi Valley Thursday evening on their way to catch planes or hit the road for home, the hotel staff was left to clean up the mess and try to make sense of what had just happened.

“She’s still out there,” said the anonymous kitchen employee, looking wistful and leaning on a mop. He was referring to the grandmotherly wine merchant the kitchen staff has now dubbed “Abuela Zeta.”

“You watch. She will save this country,” he added.

“Oh sí. I saw her driving away,” claimed a dish washer. “She had a bumper sticker on her truck: Las Vegas or Bust!”

Las Vegas is the location of the first Democratic debate, scheduled for October 13.