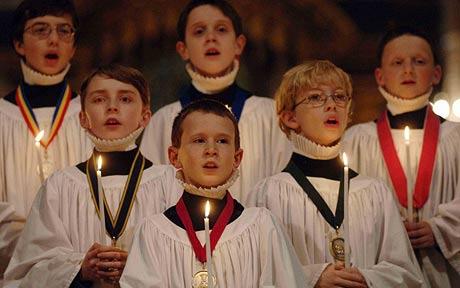 If the joy of Christmas ever breaks through the frenzy of event-going and present-wrangling and (for me) end-of-semester grading, it happens through music. This year, for instance, I sat in my city’s gorgeous basilica and listened to a youth choir perform a haunting, dissonant arrangement of “O Come, O Come, Emmanuel.” The sound of the voices and organ in that space for a few transcendent moments nearly lifted me off the pew. No one can deny that the church’s writers and composers over the centuries have put their best efforts into music celebrating the Incarnation.

Think of the rich theology we sing every year, half the time hardly noticing, with lines like “He comes to make his blessing known/ far as the curse is found,” or “Lo, he abhors not the virgin’s womb,” or “The hopes and fears of all the years are met in thee tonight.” In fact, if we were suddenly faced with the necessity of Christmas-carol rationing, we could probably survive very well on just the lyrics to “Let All Mortal Flesh.”

On the other hand.

Christmas is also the holiday with the very worst music. The most spectacularly awful stuff is the secular schlock, and we’re subjected to it repeatedly, for weeks, in soft jazz muzak versions in every grocery store and mall. I don’t ever want to hear “Santa Baby” again, not this year, not any year. Or “So This is Christmas.” Or “Simply Having a Wonderful Christmas Time.” (For fun, in the comments, feel free to share your Christmas song hate-list.)

Did you know, however, that there are Christmas hymns so bad they never get sung, even in the most desperate churches? Yes. I’ve done some research, and here are a few examples I discovered.

“God Rest Ye Merry Feminists”
Here’s one from about 1990. Good intentions involved, but you can imagine why it didn’t catch on.

God rest ye merry feminists
Let nothing you dismay.
Remember Jesus honored women
At least by the standards of his day.
He came to topple patriarchy
From its ancient sway!
O tidings of comfort and joy, etc.

“The Begats Rap”
Here’s another unfortunate attempt to be relevant. Admittedly, Luke 1 and 2 get all the love in Christmas music, so it does make sense to try doing something with Matthew 1. I guess.

Abraham, he was old and gray but still became a dad.
Isaac was the promised gift he thought he’d never have.
Then Isaac’s son was Jacob, and Jacob had a dozen sons,
And Judah begat Perez because Tamar, she was a crafty one.

“The First Noel: Supplemental”
This is one of those carols that no one knows beyond the first line and no one likes to sing anyway. The tune roller coasters up and down and the words clatter randomly over the melody, as if it was made up on the spot by a bunch of drunken shepherds. It’s an English carol, apparently from a dark time before anyone had invented steady metrical form. Did you know there are dozens of even lousier verses that we never even print in hymnals, let alone sing? Here’s one about the shepherds getting organized to go to the manger:

And so they said, “Guys, we should go
To find this babe in manger low.”
But then they thought, “We don’t know the way,
we have no GPS, and besides we can’t just leave our sheep unattended on this hillside till day.”
Noel, noel, etc.

“The Eco Carol”
So many carols remark on the cold, wintry weather in Judea that first Christmas night, which seems historically doubtful and probably only reflects European weather at Christmas. At least it used to. Evidently someone decided to write a new carol giving some attention to climate change.

Lo, how a rose e’er blooming,
Much earlier than before.
The end of things is coming
As temps climb more and more.
For we have wrecked the earth.
O Jesus will you save us
by this, your holy birth?

“Can I Cry Out?”
I’ve noticed that Christmas carols too frequently involve questions no one is asking.

Also, I’ve noticed that there are songs from the point of view of absolutely every character in the Christmas story. Mary composed her own song, of course, and we’ve been cranking out settings of it since the early church. You hear very little from Joseph, but I learned from my friend Greg Scheer that someone in England in the fifteenth century wrote a little song called the “Cherry Tree Carol” in which the pregnant Mary craves a cherry and asks Joseph to get one for her. He replies: “Why don’t you have the baby’s father get it for you?” Nice that Joseph gets one little passive-aggressive moment out of the whole situation. In the next verse, baby Jesus—still in the womb—asks the tree to bend over and deliver a cherry to his mom. Makes you wonder about family dynamics later on.

Anyway, we’ve got “We Three Kings” from the point of view of the wisemen. The angels and shepherds get their jubilees. How about the innkeeper? Yep, someone has thought of that. The beasts? Surely you remember “Carol of the Friendly Beasts.” We even have a song from the point of view of a little boy who appears nowhere in the Gospel accounts but apparently showed up at the manger anyway—with his drum.

What’s left? Well, we’re down to inanimate objects now. Maybe someone should compose a carol from the point of view of a rock on the side of the road to Bethlehem, a rock who asks questions no one needs answered. Then again, maybe not. Moving on.

“The Love Shack: Christmas Edition”
Don’t try this at your church. But I’ve heard a rumor that a certain over-eager music minister [no, I’m not revealing names here] wanted a super-awesome finale for his church’s big Christmas extravaganza. Nothing brings in the unchurched for a little Yuletide evangelism like an 80s pop hit lightly revised with Christmasy lyrics. So imagine a stable on the stage, dimly lit. Now here comes a few magi from the back of the auditorium, shakin’ it down the aisle, following a spotlight/star toward the stage. I have to admit, the lyrics transfer to a Christmas theme with surprisingly ease.

If you see a faded sign at the side of the road that says
“15 miles to the
Love Shack”
Love Shack, yeah, yeah

And we’re headin’ on down to the Love Shack
I got me a caravan, it seats about twenty
So hurry up and bring your census money

Sign says (woo) “Stay away, fools”
‘Cause love rules at the Love Shack
Well, it’s set way back in the middle of a field
Just a funky old shack and I gotta get back

You know, if you change the punctuation a bit, it’s not a bad summary of the season’s message:
Love Shack Baby: that’s where it’s at. Merry Christmas!