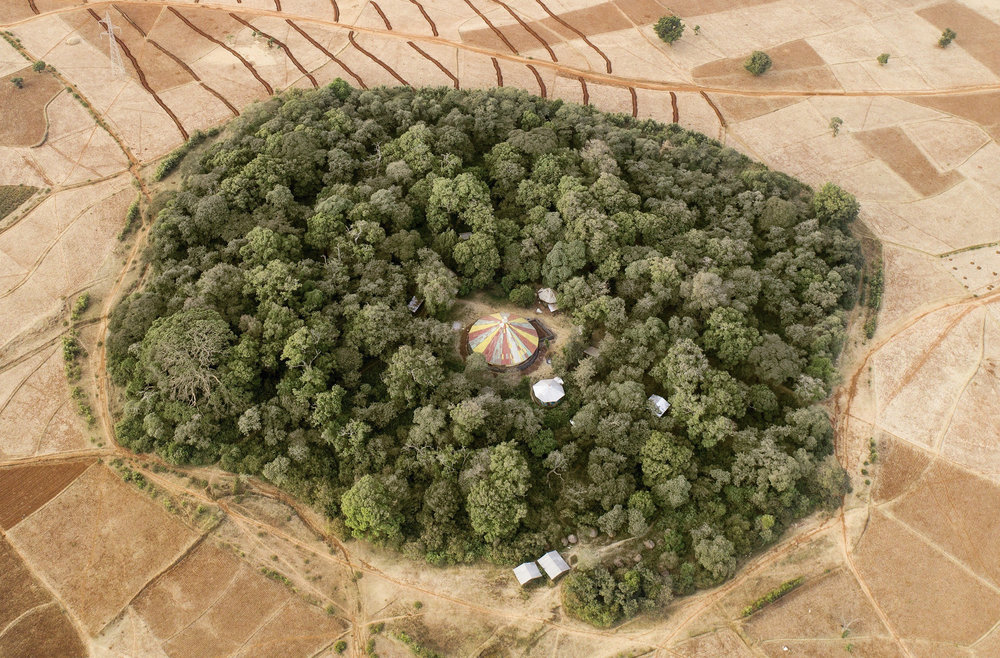 Refugia (re-FU-jee-a) are places where life survives, against great odds, in a crisis. A wildfire destroys most of a forest, for example—but not all of it. Some patches survive, maybe on wetter slopes or across a river. Even in the burned parts, some critters are able to crawl into places of safety or flee to different ground—they find refugia. And start again.

As you may know, I’ve been rather taken with this idea of refugia lately. Not only are we facing a pandemic and a climate crisis, but we are facing a whole convergence of crises in culture and in the church. What can we learn about resilience from the refugia model? In particular, I’ve been wondering what it might mean for Christians to understand ourselves as “the people of refugia.”

After all, as we know from the Advent narratives especially, God loves to perform mighty deeds with only the smallest, most obscure and unlikely raw materials. The stump of Jesse grows a branch and bears fruit. A young girl in a small town under an oppressive empire gives birth to a child. This is all part of God’s refugia way.

I keep saying that I’m “exploring” this idea, but at this point it’s more like I’m serving the idea. Refugia seems to have a mind of its own and has sort of taken over my thinking and writing. And podcasting! I’ve just completed another season of The Refugia Podcast. I certainly invite you to listen to the episodes, but here, also, is a convenient summary of Season 2.

Layers of crisis
Looking back at my summary of Season 1 last year, I’m amazed how bad things were even before the pandemic. Remember? It seems like ages ago. Now we have the pandemic on top of everything else. One of my guests this season, Ruth Harvey, Leader of the Iona Community, very gently referred to these as “tender times.”

We have all been scrambling to find or make refugia, some in our homes, some through new associations made possible online, some through spiritual practices or hobbies or activism or other means. I talked with all my guests about how we’ve struggled, wearily, to “persist” and to restructure our life-ways with an eye toward some uncertain after-the-pandemic future. Our experience in the past year is a good illustration that refugia are not merely places to hide, but places to begin the work of reconstruction and renewal.

Emergent properties
My sometime co-host, Calvin University biologist David Koetje, reflected on the season with me in the final episode and noted the variety of cultural, spiritual, and ecological refugia my guests had described. Refugia are by definition small, local, and particular to the context. Yet taken together, they start to add up to larger shifts.

Dave described the biological concept of “emergent properties.” In biology, this means, simply put, that the whole is greater than the sum of its parts. Or: the whole has properties distinct from the properties of the parts. Examine one species of small mammal and you’ll learn what it eats. But until you study the whole system, you won’t perceive the nutrient cycle that encompasses not only that creature but all the plants, insects, fungi, and terrain in the environment.

Similarly, as we struggle in these “tender times,” we may not perceive right away what new patterns are emerging. Ruth Harvey urged us to be attentive to those patterns as well as to the flashes of insight the Spirit might give. She spoke of the Welsh term cynefin (kin-EV-n), which is a way of describing the habitat created in human cultural systems. What cultural and spiritual habitats are we creating or receiving? Another guest, writer Fred Bahnson, spoke of “infrastructures of holiness.”

This reminds me that in the natural world, disturbance is necessary to keep an ecosystem alive and thriving. We seem to be in a period of immense disturbance right now. Much will have to be dismantled and destroyed, including in the church. What will persist? Where are the refugia to be found? What infrastructures can we consciously build?

Now is a good time to follow the example of the Iona Community, which has always sought to balance action and reflection as they seek discernment. Emergent properties take a while to emerge, and we need to be attentive to the process.

Young leaders
Dave and I marveled at the hard-won wisdom and optimism of my guest Bill McKibben, a writer and long-time environmental activist. He spoke of the “steady drip of good news” in the climate movement and the momentum that keeps him and others pressing forward in their work. Divestment is happening, public opinion is changing, court battles are succeeding. A lot of this is attributable to young leaders with incredible savvy and determination. Bill has invested much of his effort over the years in supporting and mentoring this new generation of conscientious world citizens.

Dave and I agreed that in our Calvin University students, we perceive a palpable sorrow, lament, and fear about the world’s future. But also: determination. This generation is invested in action. Another guest, wildlife biologist Tim Van Deelen, described holding his graduate students’ sorrow and anger with them, but also showing them how to channel that into productive work in their fields.

The young have been essential in the climate movement, but what about in the church? Two of my guests this season were young women—brilliant Calvin alums, of course—still in their twenties. Katerina Parsons is working in international development, while Kathryn Mae Post is in divinity school on her way to becoming a religion journalist. Both of them are faithful Christians, but they have also struggled with a church in crisis and transition.

They each described a painful process of reconstructing their faith as young adults. They have found “ex situ” refugia in church families very different from their growing-up churches. They now find the most meaning and spiritual nourishment in practices—spiritual practices as well as activism and advocacy. When I asked them what they dreamed of for the future of the church, they both spoke of radical inclusivity.

New capacities
Some parts of the church have invested in an identity I’ve been calling “church of empire.” This is the church which seeks to be grand and successful; it cozies up to power. Striving to be the church of empire, however, leads to hypocrisies and idolatries that become sickeningly evident.

In my conversation with Bill McKibben, we talked about parts of the church that long ago lost their former cultural dominance and have actually discovered freedom in that. Mainline Christian groups, for example, have been far more involved in climate activism and mitigation than conservative groups in the US. Episcopalians and Presbyterians and Methodists have built fruitful interfaith alliances (the Yale Forum on Religion and Ecology is one example) and have partnered with non-faith groups on the shared labor of what we sometimes call “creation care.”

At one point, I found myself saying to Bill: “The work of God right now is happening so much outside the church.” He agreed. It seems to me that partnering with other groups—Christian, interfaith, and non-faith—is a capacity the church needs to build right now in order to participate well in many forms of healing and reconciliation.

Co-sustaining in community
From my guest Randy Woodley, I learned three helpful new terms. Randy is a Christian pastor and a member of the Keetoowah Cherokee Band, and he deftly brings Christianity and indigenous worldviews into instructive conversation.

Randy convinced me that we need to set aside, where we can, the terms “kingdom” and “stewardship.” Randy likes to speak of God’s telos for this world as “the community of creation.” This expresses the web of interrelationships among God, humans, and the more-than-human creation in a way that “kingdom” doesn’t quite cover. Christ has come to bring about harmony across all relationships, throughout creation, as Colossians 1 declares. The vision is similar to what the Cherokee call “Eloheh” (AY-la-hay), which Randy translates as “the harmony way.”

Instead of referring to humans as “stewards,” Randy uses the word “co-sustainers.” I like this much better, too, because “steward” implies both the absence of the Owner and a hierarchical and objectifying approach to the more-than-human creation. The term “co-sustainers,” on the other hand, reminds us that humans do not do all the work in keeping life going on this planet—far from it! Plants and animals and waters and winds do their work, too. We are called to co-sustain with the other creatures and with God, a very present Master.

Not alone
In reflecting on the season, Dave cited Aldo Leopold’s famous remark that an ecological education leaves one feeling “alone in a world of wounds.” The world does indeed feel full of wounds these days, and not only ecological ones. We need to acknowledge these wounds, for sure. Tim Van Deelen affirmed that we are in fact obliged to feel sorrow and anger and to lament the world’s wounds. That is how we show love for what is valuable when it is damaged or neglected. That is how we repent, too.

But Dave also reported that his students insist we need not feel alone as we seek to heal those wounds. Leopold was writing in the 1940s. We have more wounds now, but we also have greater means of connection, even amid an isolating pandemic.

The church can be, if we let the Spirit make it so, a place of healing and connection—a place of refugia. Literal refugia embody and remind us of that. Fred Bahnson described the incredible church forests of Ethiopia, small refugia of biodiversity which encircle thousands of churches, and which the churches protect as holy ground. Dave described a restoration project at our church, where we are nurturing the little wetland, prairie, and woods on our church property, creating a place for education and reflection. We call it, of course, “the refugium.”

I asked Dave about his home garden—an ambitious acre of flowers, shrubs, and many food crops. I wondered if he would miss this life-giving place in the upcoming winter months. Dave assured me that even in winter, under the snow, much is growing.

The Refugia Podcast is available on your preferred podcast platform. For more about my guests, show notes, and transcripts of all the episodes, go to refugiapodcast.com