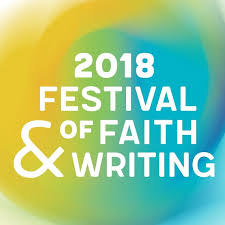 Postcards from Festival 2018 (So Far)

We’re two days into the Festival of Faith and Writing, one day still to go. There’s plenty to be anxious and sorrowful about these days, a theme I’m hearing often among these good people at the festival—readers and writers who tend to feel things deeply. These are folks acutely sensitive to abuses of language toward deceit and violence. But they also know that language can console and encourage, make us brave and make us laugh, clarify and challenge. We’re cherishing that power together during these three intense days.

Already I’ve gathered more treasures than I can sort or ponder. So I will simply toss a few of the more portable ones into a basket today and invite you to enjoy a sampling. Take one to savor.

on persistence
Kwame Alexander, summing up his experience with rejections: “Once you get the yes, the no’s don’t matter.”

on the “not yet” before chaos gives way to light
Macy Halford, quoting Oswald Chambers: “Expect God to come, don’t expect him to come in the way you expect.”

on having faith in people
Carrie Newcomer, between songs both melancholy and hopeful: “I’m a traveling folksinger: I believe in the power of kindness.”

on where to go for help
Parker Palmer, quoting Wendell Berry: “What we need is here,” within us and between us.

on balm for daily life
The woman sitting next to me in a session, sharing how she and her husband have started making fires in the fireplace in the morning before work. “We call them ‘breakfast fires.’”

on the need for good writing
Jonathan Merritt, motivating us to keep writing: “The internet is a hungry monster and we have to feed it.”

on the publishing world
Jonathan Merritt, urging us to accept new digital realities: “Hemingway is dead, literally and figuratively.”

on gendered narratives in the media
Abigail Disney, with a wry smile, about herself: “If you want to see what a Disney princess looks like, here it is.”

on women in the film/TV industry
Abigail Disney and Dorothy Fortenberry, describing the need to find new ways to build stories: “Where do we get the playdoh to make the new Legos?”

on #metoo
Abigail Disney, holding out both compassion and fierce accountability for men in media who have lost their careers: “The road to redemption must be paved with bricks of apology.”

on religion journalism
Sarah Pulliam Bailey, describing changes in the religion beat since the election: “It’s been hard to break through Trump noise.”

on public curiosity
Sarah Pulliam Bailey, assuring us that people still want to read in-depth journalism: “There’s a deep interest now for context and history to inform the moment.”

on peacemaking
Padraig O’Tuama, reflecting on his experience in reconciliation work in Northern Ireland: “The work of peace is fierce,” and, at the same time, “Through the gentle arts of human encounter, you can get to know someone who’s not you and still stay you.”

on using your words
Padraig O’Tuama, relating the words commonly used by a 14-year-old girl who had a wily way of getting the mean kids to stop bullying: “Settle down and be happy.”

on longing
Kate Bowler, sharing her empathy with Christians who adhere to a prosperity gospel: “We want less pain, and if we can’t have it, we want answers.”

on life after certainty
Kate Bowler, offering gentle words to those sitting with her in that dark place after a terminal diagnosis: “You must discover what is possible now that the Terrible Thing has happened.”

This is just a tiny sampling, and I’m only one person. I’m scribbling in my notebook as fast as I can, and I’m not even telling you all the clever jokes and tender stories and dear human connections I am witnessing in this extraordinary space. It will take months, maybe years to spin out and consider the implications of everything that happens this weekend. I’ll just say: Right now we need courage and beauty and tenderness and wisdom and brilliance and perseverance, and what we need is here.