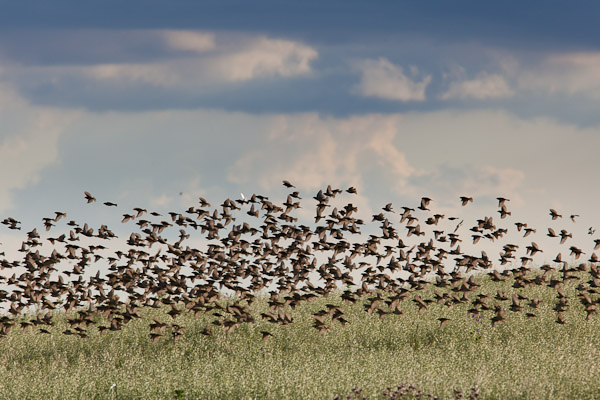 “And speaking of things overheard, you heard right:
if I have to go out, I am going to go out singing.” – Brett Foster

We heard of Brett’s death on Tuesday. Friday morning, my first pass through my email revealed that a good colleague, June, is now in hospice. I had no idea the breast cancer had aggressed into bone cancer. A few hours later, another email brought the news that Brett’s colleague in the English department at Wheaton College, Roger Lundin, died Thursday, age 66. Two in one week for them. For all of us.

Don’t tell me nothing is wasted. These too-young deaths, they fray the fabric of our delicate hope.

The third week of July on a day just after a rain, blueberry bushes are so laden, they look blue from a distance. We go out there with our plastic-lined buckets tied to our waists with a rope, and we stand by head-high bushes and pick. It’s easy. Our fingers roll the plump berries off the stems in bunches. The buckets fill quickly. In the straw beneath each bush are the berries that dropped, rotting on the ground. The bushes produce far more than the u-pickers will ever pick, far more than the rolling machines will shake into metal bins. Thousands of berries will drop on the ground and rot.

Oh, but nature never wastes. The dropped berries are broken down by microbes and they return to the soil and fertilize the bushes, or they pass through the digestive systems of birds and return nitrogen to the soil somewhere a mile away.

Nature depends on the principle of redundancy, even gross overabundance. Berries, cottonwood seeds, tadpoles, spermatozoa, sparrows, mosquitoes. A deer produces twin fawns. If one is weak, it will be abandoned. No matter. The other survives, and the weaker fawn feeds the wolf cubs. It’s the circle of life.

At least, that’s one way to look at it. The other is: Nature may abhor a vacuum, but it does not abhor waste. Nature revels in waste, glories in it, spins it into the swirling patterns of life.

Is that how God sees the patterns of our lives, like so many twin fawns? Some will live long, some will die young. They succumb to the wolves. No matter. It’s the circle of life.

“God is in the salvage business.” That’s another thing we say to each other, especially to salve over the ways we screw up our lives. I believe this one, but that doesn’t cancel out the possibility of waste. The man who now works the strip clubs in Baltimore’s red light district, arranging for health care and rehab for the dancers and bouncers who don’t trust anyone else—he spent twenty years as a heroin addict before getting clean and going to work helping others. Well, beautiful. God redeemed his life. True, he wouldn’t have street cred with the people he serves if not for his time on the streets selling drugs to support his habit. But don’t tell me those twenty years weren’t wasted. “I was a predator to my community”—that’s how he sums up those years. I bet he wishes he could have spent twenty years learning to play the saxophone instead.

And what about this man’s son, shot dead amid the violence in Baltimore last spring? The loss of that young man’s future: what a waste. What about the people who died in the church in Charleston, what about all the black lives who matter but are cut short in snarls of hate? Or all the children who have died—so far—in this country’s scourge of gun violence in schools, the soldiers killed in mistaken wars, the innocents killed by bombs or machine guns, randomly, senselessly?

What about the hundreds of people killed or injured in yet another terror attack yesterday in Paris? Was that not a waste?

And what about lives diminished and talents lost when people suffer from chronic illness, or languish in prison, or succumb to crippling depression? The faces, the losses crowd my imagination. It’s too much! Waste waste waste.

Don’t tell me it’s not a waste.

It’s not that lives diminished or cut short are not meaningful, valuable, purposeful, beautiful. Brett blessed many people, and he leaves behind a legacy in his family, his students, his friends, his writing, his work. So did my friend Karen and my colleague Bill. There’s a way to cherish something precious for every name on our personal lists. It’s tempting, in fact, to regard a life as more precious when it is somehow limited or cut short.

But the missing futures, the lost possibilities. That’s what makes me angry.

That’s why I lament.

Potential gone to waste. It could have been different. Why isn’t it different? Is all-that-could-have-been held in the mind of God? Is that enough?

God salvages, yes. But what could have been. That’s what leadens my heart.

Does God revel in waste, glory in it, spin it into the swirling patterns of life?

Here is the full poem by Brett Foster from which the epigraph is taken.