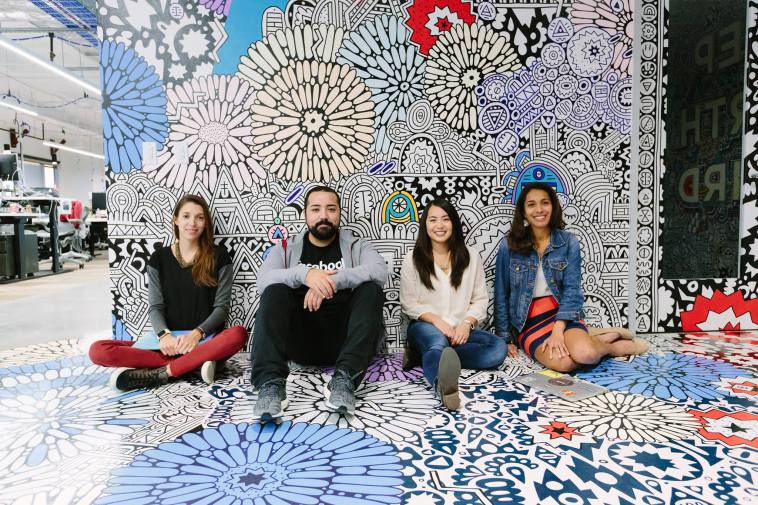 Monday at the Center of the Universe

This past Monday, I peered into the humming center of the universe. I’m talking about Facebook headquarters in Menlo Park, California.

One of my offspring has an internship there this summer, so my husband and I used our son’s California sojourn as an excuse to goof around in San Francisco for a week. We capped off our visit with a pilgrimage to the great Hacker Mecca. I’m still trying to process the experience. (Ha! Hacker joke there. Sorry.)

Facebook’s address is literally 1 Hacker Way. This address was not terribly helpful to our Lyft driver, however, who dropped us off at the first building we came to on the “campus,” and left us to figure it out from there. Fortunately, the many, many security guards at Facebook are super friendly. We waltzed right into the nearest door and no fewer than three receptionists greeted us and asked if we were visiting someone. “Yes” was the correct answer. No one is allowed beyond the security-card-activated doors to the inner sanctum unless you 1) work there, with the ID to prove it, or 2) are visiting someone who does.

You sign in on a screen, naturally, providing your name and email address and then typing in the name of the person you’re visiting until a list of choices comes up and you tap on the correct person. The next screen is a non-disclosure agreement that you have to sign. Summary: “Look, we invent all kinds of secret, nifty new things here, and it’s really important to our business that you not be a spy or reveal what we’re up to before we release it. OK?” We had to show ID. And we were instructed, in super cheerful tones, that we were not allowed to take pictures of any computer screens or white boards.

Note to possible Facebook blog-checkers who may be reading this: Anything I reveal in this post is already publicly available information. OK? Thanks.

After checking in, we texted Jacob to let him know we had arrived. Turns out we were at building 15, which was nowhere near building 24, which is where he was. “Take the shuttle,” he advised. So we hiked around a couple buildings to the shuttle stop, passing a disconcerting number of dumpsters, racks full of blue bikes available for employees to use, and vast parking lots where cars, many of them hybrids, baked in the sun. More than a few Tesla Model X’s were plugged into recharging stations.

Building 24 is where Instagram folk work—Facebook purchased Instagram for $1 billion in 2012. We had to sign in again in this lobby, although apparently the NDA we had signed twenty minutes earlier was still sufficient to the purpose. Then we sat in the lobby for a while to wait for Jacob to finish his work day. What does he do? He writes code. That’s all I can tell you. Something about helping businesses use Instagram to succeed? I don’t know exactly. Even if I did, I couldn’t tell you.

Anyway, as I sat there in the lobby mesmerized by a slideshow of gorgeously playful art pieces depicting the Instagram logo made of carefully arranged fruit, flower petals, straws, cake, or other “media,” I gathered my initial observations.

At last, Jacob appeared with his magic security badge to let us inside. Over the next couple hours, he toured us around his work area, then took us to the sanctum sanctorum, “MPK20,” the main building at the center of the campus. Everywhere, young people were standing or sitting at their workstations in huge open-office areas. Or they were working together in meeting rooms, teleconferencing with off-campus co-workers. Or they were walking or biking or shuttling from one building to another. If we saw any “bosses” or “executives,” I couldn’t tell. Jacob pointed out a modest, glass-enclosed office in the middle of MPK20. “I think that’s Zuck’s office,” he remarked. “We keep our CEO in a glass box.” Zuck wasn’t there, of course.

Lots of things astonished me as we gawked our way through. The spaces felt so… new. As if the buildings had been thrown together last month and everyone had just moved in. Steel girders, HVAC, some drywall and paint, bring in the tech gear: go. In a way, this is true. Facebook was founded in 2004. Only thirteen years ago, Mark Zuckerberg was still a Harvard sophomore. All of this has mushroomed? ballooned? None of our usual metaphors even touch it.

The buildings are not glamorous or even slick. The architecture and design are entirelyabout getting work done. There are no marble floors or columns, no highly polished mahogany, no luxe furniture, no symbols of status. No one cares about that stuff. Instead, the workspaces have it where it counts: unlimited tech equipment for everyone, ample spaces for meeting and collaborating, everything you need to keep working with minimal interruption. Interactive wayfinder screens help you locate restrooms or people or conference rooms with their clever names. There are even vending machines (just type in your employee code) dispensing batteries, dongles, and cables. Take what you need. Keep working.

Hungry? There are micro kitchens everywhere with unlimited drinks and snacks, plus cafeterias that serve food all day. Free of course. Need some fresh air? There are plenty of outside spaces for meeting or thinking. Restrooms? Nearby and well supplied. A shower, too, if you feel grungy. Need to exercise? There’s a gym a shuttle ride away, plus some workout spaces somewhere nearby, maybe a treadmill with a desktop mounted on it, so you can put your laptop up there and keep thinking about that coding tangle while you pound out some miles. Or maybe you just need to chill and relax a bit before getting back at it? Well, how about the music room, with a communal violin to play? Or the fun swing on the rooftop garden? Yes, there’s a rooftop garden. In fact, all of MPK20’s roof, all nine acres of it, is a rooftop garden. Just make sure you have your employee badge everywhere you go. You can’t get through any doors without it.

For dinner, Jacob took us down the “main street” of campus, which is a little like Main Street in Disneyland. At six p.m. on a Monday, the place was hopping, with people moving in both directions down wide walkways. I saw quite a few spouses and kids around, few other geezer parents. A bike shop, a bar, a cupcake shop, and several other outside vendors lined the walkways. We ate at one of the main cafeterias, though, free to employees and their guests. The food was international and excellent.

As we sat at one of hundreds of outdoor tables eating our Brazilian cheese fritters and Colombian-style pork milanese, Jacob explained some of Facebook’s core values, which are, as listed on their (of course) Facebook careers page:

“Move fast” seems the most evident. That’s why they have thousands of coders, designers, and dreamers buzzing away in their hives, coming up with new “products,” fixing bugs, adding features. Jacob explained that “Be bold” got modulated to “break things”—in other words, don’t be afraid of taking risks and making mistakes. Sure, there are processes and standards, but everything is fluid. “Be open” has to do with access to information within the company. “Impact” and “social value” are expressions of Facebook’s essential optimism, the desire to contribute to social goods by connecting people.

Compare those values to the way businesses were run in 1960s America, by the sort of principles people like my father assumed were eternal. Follow the established procedures. Observe the chain of command. “Keep your nose clean.” Battle to compete in the marketplace. Do as you’re told. Work your way up. Leverage charm and appearance toward success. If you’re not white, male, heterosexual, and able-bodied, expect discrimination.

That was then, this is the future. The future is young, minority white, globally connected, and unconcerned with status, appearance, or conformity. One simple indication: no one dresses up at Facebook. I showed up a little sheepishly in jean shorts, a t-shirt, and running shoes, and I was not especially underdressed. None of that stuff matters. It’s all about the work: building things, inventing things, being creative, moving forward, moving fast.

Bill McKibben, in his 2010 book Eaarth, argues that to survive climate change, we will have to decentralize food production, energy production, manufacturing—all the stuff that, over the last few centuries, became heavily industrialized and guzzled fossil fuels. However, he is a big fan of the internet. The internet, he proposes, is how we will stay connected, share information, and avoid (one hopes) the ignorance and tribalism that localized living risks. Only “[a]bout 1 percent of the world’s electric supply goes to operating the data network,” so “[t]he Net is the one solvent we can still afford,” McKibben writes.

All this to say, whatever you think about Facebook as a company or a phenomenon, it likely represents where we’re moving. Fast.