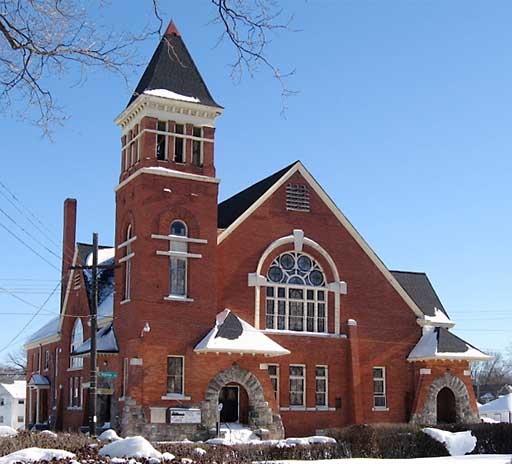 “There’s a lot of down time between the mighty deeds of God.”

I heard myself saying this to my friend Sharon over pancakes yesterday. We were talking about her church’s efforts to discern where God is taking them next. They were weathering some discouraging developments along the way, and even for people who have seen God’s unmistakable workings in the past, God’s laugh-aloud, no-doubt-about-it mighty deeds—even then, sometimes you wonder… what’s taking so long this time? And what are we waiting for, exactly? We live so much of our lives between promise and deliverance, those long cloudy stretches of hope and doubt.

It was time, for both our sakes, to recount what I had seen the day before.

First we have to go back twenty years, to when our mutual friends Trevor and Linda moved to Jersey City, New Jersey, after graduating seminary. Long, difficult years followed, years of trying a lot of hopeful but ultimately unsuccessful ministry strategies. Finally they experienced a turning point and slowly a vision came into focus. Today, New City Kids is an innovative, savvy ministry that transforms the lives of teens and kids through the power of the Holy Spirit and a lot of fantastically creative people. It’s a kids’ after-school program, a teen mentoring program, a training ground for leadership and hopeful futures, and a lot besides. I won’t say more; you can read all about it on their website. New City Kids was a long, slow miracle. But that’s what it has become.

For the last few years, however, Trevor and Linda have felt for a number of reasons that they should move to Grand Rapids, leaving the Jersey City site in the hands of their capable staff. But what would they do when they got here? Where would they live? How could they serve here? Years went by before anything became clear. The Spirit’s guidance? The Lord’s leading? Where was it? For a long time, it seemed there was a whole lot of silence.

Last year, finally, it started to seem possible that they could replicate the New City Kids program here in Grand Rapids, and let this site become a greenhouse for additional sites. The ministry could “multiply,” as they say in the biz. Great, but lots of things had to fall into place, funding primarily. And staff. And a site. And community buy-in. And a place for their family to live. And a school for the children. More waiting. Too much silence.

“Why does God tell us things only on a need-to-know basis?” That was another question I asked Sharon over pancakes.

The first question that was answered for Trevor and Linda, after months of consternation, was where they would live. Long story, but here’s the short of it: they bought the house next door. Yes. Ron and I have not lived in the same state with these people in twenty-two years, and this summer they moved into the house next door to us.

Next came, in rapid succession: seed funding for New City Kids Grand Rapids, a terrific core staff, the eager cooperation of school administrators, and a perfect site in a neighborhood where the need is great. Trevor found the site by meeting with all kinds of people, by visiting high schools, and by walking neighborhoods. One day he walked into a church, cold, and explained the ministry to the staff. They wanted in. It felt right.

It was the church where I grew up.

So that’s where I was the night before the pancakes: I was helping New City Kids Grand Rapids audition teens for jobs as tutors, recreation teachers, and performing arts teachers. There were forty teens present for this, the second audition day, and none of them know how to do this work yet. That’s the point. A dozen of them will get hired here, and they will get mentoring and training and become leaders.

And it will all happen in this old church that I love. Before the other night, I hadn’t been in the building for twenty-five years. The congregation of Alpine Avenue Christian Reformed Church sold the building around 1990 when their pastor of thirty years died of cancer. (This was when I was away at grad school.) The neighborhood had changed, and the congregation knew they were not equipped to minister there anymore. So they merged with another congregation and sold the building to a group ready to do urban ministry. I hadn’t heard a thing about the new congregation since.

I wondered what it would feel like to return. And then I turned the corner onto Alpine Avenue: same steeple spotted from blocks away. Same old reddish bricks and gold-and-green windows. But doesn’t it seem smaller? More compact somehow? And now there’s an accessible entrance ramp to the familiar old door. Still, I remember this feeling of entering here, turning right, pounding down the basement stairs.

We gathered in the basement, to me the site of potlucks and senior gatherings, women gossiping in the kitchen, after-church receptions on special occasions, sugary cake and coffee. Instead, there was Trevor and his staff on a freshly built platform, against freshly painted walls, playing drums and keyboards and bass guitar, leading a bunch of teens in a rap about the parts of speech. “This is how we teach kids at New City,” he told the teens, to the beat of the drums.

A couple hours later, after we finished our work with the teens, I took a solitary walk around the building. There’s the consistory room where I professed my faith before the elders, an occasion, as I recall, of great gentleness and blessing. The solemn, black-and-white portraits of previous CRC pastors had been removed, of course. It was now an adult education room.

In the upstairs hallway, more familiar rooms. That choir room, with its wall of closets for robes (empty) and that same old carpet with the gray-and-maroon swirly pattern, probably selected by a women’s committee in 1946. At the end of the hall, that big classroom with all the windows where we learned our catechism. The old green carpet and yellow, molded-plastic chair-desks were gone. It was now a youth room in classic style: garish colors and thrift-store couches.

I passed through hallways and doorways and stairwells, amazed at how these old spaces came back to me, the feeling of moving through them. I still find myself here in my dreams occasionally; I know every corner and turn.

Then I went into the sanctuary. That’s where it all hit me hard. Anyone observing me might have guessed that I was tearing up because of the disrepair. That wasn’t it. Actually, things looked pretty good. The organ had been removed, the floor looked rough, some seat cushions were gone and all of them were worn thin. But all that beautiful old wood still shone, and those windows let in the same warm light.

I felt overwhelmed because… this is where I learned the faith. Everything most important to me started here. Such gratitude, and such sadness, because things change. So many people gone, so many ghosts, a whole world that I loved slipped away, all present to me for an instant in the emptiness of this silent room.

It felt to me, in that moment, that the ongoing life of my old congregation had been a mighty deed, in its own busy and ordinary way. I don’t know what’s been going on in this building in the past twenty-five years. Wonderful things, I hope, perhaps small and mostly unnoticeable to outsiders, perhaps a miracle or two.

But I do know that something new is beginning in that basement now, and I believe that more mighty deeds are coming.

If you would like to support New City Kids as a volunteer or donor, please visit the website. You will find ideas for getting involved in either the Jersey City or Grand Rapids ministries.