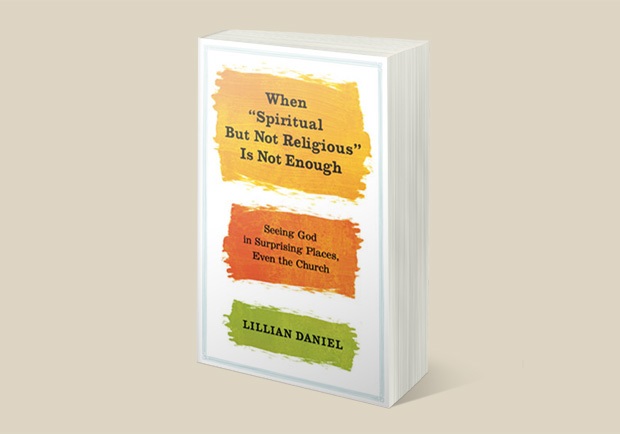 Making the Case for Church

Someone had to come out and say it eventually, and Lillian Daniel was the brave one. Her blog post “Spiritual But Not Religious: Please Stop Boring Me” raised a ruckus in September of 2011 when it appeared in the Huffington Post. The short essay describes her encounter with a man on a plane who, learning that she was a pastor, felt compelled to explain to her how spiritual he is, and how he does it all without benefit of clergy, or church, or any of that organized religion jazz. Daniel’s essay offers a withering reply to such people, pointing out how narcissistic, shallow, and mainstream they are, despite their imagined uniqueness and profundity. Daniel’s critique is harsh—deliciously so for those of us long committed to the church. We may have frequently thought these thoughts, but we would only dare speak them aloud in the privacy of our own living rooms.

So what happens when your blog post garners 579 comments on the Huff Post? That’s right: you publish a book. Daniel is an established writer, contributing regularly both to the Huffington Post and the Christian Century. She already has two books published, one on testimony and one co-written with another pastor on the clergy life. Her new book, which just appeared in January, places an expanded version of that viral essay at the front of a flotilla of her other short pieces, many of them previously published. It’s called When “Spiritual But Not Religious” is Not Enough: Seeing God in Surprising Places, Even the Church.

I’m a fan of Daniel’s writing and happy to recommend her to those who have not read her before. In her day job, she is senior pastor at a congregational church in Glen Ellyn, Illinois. Her wry humor and spiritual depth remind me of early Barbara Brown Taylor, and she represents the best of mainline sensibilities.

I’m not sure what to make of this particular book, however. I was once told by a wise editor that a title is a promise to the reader. This title seems to promise that the book will make a case for the church to the skeptical reader—not just Christ, or the faith, but the church. The back ad copy seems to confirm that purpose:

While so-called “spiritual” life keeps people self-focused and vague, religious people have something that spiritual people do not: centuries of careful religious thought, ongoing meaningful debate, and, most importantly, a supportive community that challenges and strengthens their faith. Humorous and sincere, this is a book about people finding God in the most unexpected, unspiritual places: prisons, airports, yoga classes, committee meetings, and strangest of all, right there in their local church.

All right, I thought, when I cracked the book open, let’s hear it. Bring it on! I would love to hear an extended argument for organized religion and the institutional church. Obviously I don’t need that argument for myself, but it certainly would be handy when I encounter the spiritual-but-not-religious skeptic on a plane or wherever else.

So I dove in and found myself enjoying the essays very much. I especially appreciated the longer ones in which we begin by strolling along with Daniel through some intriguing aspect of modern life, then suddenly a scripture passage sneaks up on us, and we realize we are in the middle of an affecting sermon, with Jesus standing right among us, warning about the Pharisees or remarking on the older brother of the prodigal in ways directly pointed at our lives. The other essays, on immigration reform and animals on planes, a little kitty who lived a brave life, teaching masters-of-ministry students in prison—all great stuff. I think my favorite might be a beautiful piece on the mystery of marriage in which, before a wedding ceremony, the groom reminisces with Daniel about running wild in the church building as a kid. He asks her if kids still do that, and she assures him they do. But walking down the aisle and committing to marriage, she tells him, “may be the craziest thing you’ve done here yet.”

Unfortunately, when it comes to that argument for the church promised by the title and back ad copy, I don’t think the book delivers, not even in an indirect, narrative sort of way. Those of us already in the church will find Daniel a congenial companion. We’ll nod knowingly and appreciatively throughout. But I doubt anything here would convince a church skeptic or prove useful in addressing one. Granted, a collection of essays may not be the best way to make such an argument anyway. Short essays are notoriously difficult to mold together into a coherent collection. They tend to fall apart like too-dry cookie dough, especially when, as here, writings of widely differing lengths are mixed together. And what happened in the editing process so that the original blog post simply appears without comment as Chapter 19, when we’ve already had a longer and better version of it as the opening essay?

Still, the problem here is not the writing, but an overpromise for the book’s agenda. In her book-related speaking engagements, Daniel seems to be engaged in a public accounting of what’s good and valuable about religion and the church—doing in person what the book doesn’t exactly do. So good for her. She’s absolutely right that religious people should not always be on the defensive, fielding outsiders’ bigoted (let’s just say it) accusations about the Holocaust, the Crusades, and abortion clinic bombings.

I wonder, though. Is a defense of the church even possible? Even with the most airtight arguments or winsome stories, could we ever convince the skeptic that the church is a good and beautiful place to center your life? I realize that apologetics, of which this is a sub-variety, serve more to assure the faithful than convince the “heathen.” At best, apologetics can clear away a little brush and open up some space for other forces to work.

But it has always seemed to me that loving the church is simply a gift. Why do some kids brought up in the church stick around and others wander off? It’s not always about some grievous wound. And love for the church is not the same as accepting Christian truths. No doubt you know people who more or less assent to faith propositions, but just aren’t interested in the church. How do you explain that? The church fails to “appeal” and “be relevant”? I suppose, but we’ll always fail at that, and many of us love the church anyway.

The only thing I can think of is that loving the church is a gift. Some of us love the church sufficiently enough to show up fairly regularly; others of us love it enough to serve it with our lives and labor. Either way, I think this love is simply given to many of us, like a complementary tote bag, when we surrender to faith.

The gift is not always a blessing. Sometimes loving the church hurts, because Christ makes the church out of people, and people fail. As Daniel sardonically notes, church skeptics would like the church a lot better if we could get rid of all the people in it. I would add: Love for Christ first is the only way to survive love for Christ’s church.

And that’s the hardest thing to explain to an outsider. Many of us can testify that encountering God in church is not surprising or strange at all, but a phenomenon upon which we have scaffolded our lives. We encounter God in the faithfulness of good people, in the prayers and songs in which our voices join, in the dying and rising pattern of our lives together—but all of this, all of it, is an inexplicable mystery: the Spirit imprinting the image of Christ upon us.