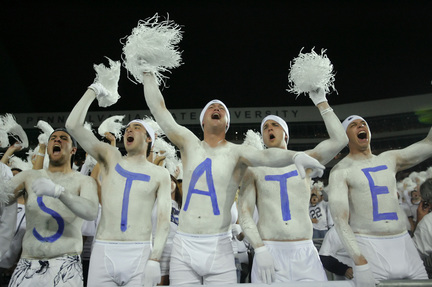 I spent this first week of Advent thinking about idolatry. It started with a This American Life podcast on the Penn State disaster, in which reporters from the radio show interviewed the stunned residents of State College, Pennsylvania, as they processed their communal nightmare. Bottom line from the interviewees: “I never thought this could happen here.” Really? Well, I mused cynically, these people are obviously unfamiliar with the concept of total depravity.

The second half of the podcast, however, clipped together excerpts from a 2009 This American Life episode, when all was well and all manner of things were still well in Happy Valley. At the time, the visit to Penn State was prompted by the school’s perennial appearance on the “top ten party schools” list, the one put together by the Princeton Review for their college ratings publications. The producers of the show wanted to get inside Penn State’s party culture and find out what it was like. Listen for yourself to the descriptions of students peeing on lawns and digging up stop signs, alumni at tailgate parties offering drinks in plastic cups to college kids they don’t even know, administrators deftly deflecting the suggestion that they ought to crack down on the drinking culture at the U.

Of course, I was not surprised that all of this goes on, at Penn State and on thousands of other campuses. I was an undergraduate at the University of Michigan, after all. However, what amazes me about the football, the tailgating, and the drinking, drinking, drinking is the religious fervor with which people pursue it. People organize their life stories around significant football games. They make holy pilgrimages. They engage in ritual grilling and boozing and cheering. They seek the high mystical ecstasies of winning the big game. They don sacred vestments and practice hatred toward the worshipers of rival gods. They gladly sacrifice quantities of cash and a good amount of decency in order to venerate their gods.

In Desiring the Kingdom, Jamie Smith describes the stadium as one of the holy places of our culture where we learn what amounts to religious habits. Jamie argues that we are creatures, at heart, of desire. And we learn to desire what our practices train us to desire. John Calvin said that our hearts are little “idol factories.” We are determined to worship something, even if it’s Stadia, the goddess of crowd fervor.

She is not the only pagan god worshiped in our culture. Jamie also describes the rituals of the shopping mall, those that honor—what shall we call this god? Maybe Mallus, or the goddess Luxuria, or Bargainia, or perhaps Gadgetor. A few years ago, a book called Sacred Santa ruined my Christmas. The author, sociologist Dell de Chant, argues in a chilling, deadpan style that if we define religion more on the cosmological, pre-modern model—it’s not about the propositions to which you assent but the way you think about and act, in the material world, toward an “ultimate concern” —then consumerism fits the definition perfectly: the mythologies, the rituals, the sacrifices, the way we organize time. We are very religious culture.

So as the high holy days of football bowl games converge with the high holy days of consumerist shopping, I wonder about the little pagans inside each of our hearts. Jamie argues that Christian worship needs to be our countercultural practice, our defiant resistance against the idols. Yes, amen, but I worry about whether we’re fit for the fight. The idols are powerful, with their glamour and frenzy, their constant demands on our time and money, their promise of power and pleasure. Can our Advent candles and dear familiar hymns, our earnest sermons and even our magnificent oratorio performances—can they drag our hearts away? Maybe not, if this is about competition. But it can’t be, because God doesn’t play that game. God defies all the idols with the unexpected, the humble, the poor, the simple, the upside down.

I thought at first that Advent was a weird time to think about idolatry, but maybe that’s exactly what Advent repentance means in twenty-first-century North America: turning away from the idols and making the difficult, countercultural pilgrimage toward the holy infant.