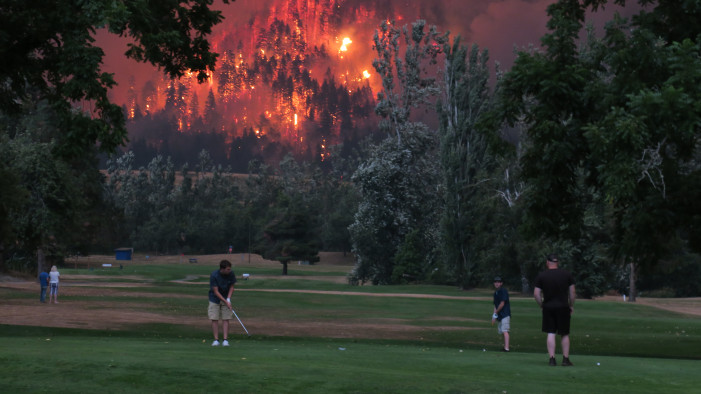 Hevel and Hope in the Midst of the Climate Crisis

That zinger appears near the conclusion of the kooky and wonderful Post-Rapture Radio, Russell Rathbun’s 2008 novel, which inventively satirizes American Evangelicalism for its shallowness and materialism. Toward the end of the novel, an eccentric, quasi-prophetic figure called Idiot John—a stand-in for John of Patmos—responds to another character’s plaintive query with that sardonic quip. I’ve recited that bit of dialogue fairly often, because it’s true: from a certain point of view, the world is always ending.

At the moment, though, apocalypse seems to press especially heavily upon us. Yesterday afternoon, I sat in a lecture hall at Calvin with a hundred or more undergraduates and professors, listening to Prof. Allen Webb of Western Michigan University offer a recitation of the bad news about earth’s climate. It was a familiar litany: the climate is warming ten times faster than ever in earth’s history; half the greenhouse gases now in the atmosphere arrived there since 1970; we are already at a 1.2 degrees Celsius increase in average temperature when our limit is 1.5 or 2.0 at the very most; we are already at 415 ppm CO2 when our limit is 350 ppm; feedback loops turn dire conditions into exponentially more dire conditions. And so on.

What struck me yesterday was the weight of this dreadful reality on the young people in the room. They will live in a different world than the one I was born into in 1965. Even in a best-case scenario, if everything goes splendidly well in the next twenty years, college students today will live through a rapid transition to an entirely different economy. They will have fewer luxuries, travel less, eat more simply. Drought, flooding, and enormous storms will continue to increase in frequency and severity. Climate disruptions will continue to force migrations, putting enormous stress on political systems, threatening or exacerbating international and regional conflicts. Middle-class college students in rich countries will struggle enough; poor people in poor countries will suffer desperately; in fact, they already are. That’s a best-case scenario.

My colleague Dave Koetje is now teaching a biology course at Calvin called Global Health, Environment, and Sustainability. He surveyed his students to see how they were feeling about the state of the earth. He used some of the same questions from a survey done by the Yale Program on Climate Change Communication. The results? Of his 25 students, 15 were alarmed and 7 were concerned about climate change. That total of 78 percent compares to 52 percent in the general American public. It makes sense that young people are more afraid than older people. They have to live in this world longer than we do.

I look around me at all the lovely undergraduates on my campus, finding their way, majoring in speech pathology or nursing, trying to make friends, missing their hometowns and families, looking forward to weekend activities like rock climbing and baking cheesecake brownies (and doing their homework, of course)—and I think: what will become of you? What have we done to you, most of us unknowingly and unintentionally? What will we do for you, now that we know, now that every choice we make or do not make is, by definition, knowing and intentional? How will you carry the burden of living in this disrupted world? What can we do to prepare you?

At lunch before the lecture, a small group of professors and students chatted with Dr. Webb. At one point, one of my younger colleagues, a philosophy professor, explained that she was engaged to be married, and she and her fiancé are wondering, in light of the climate crisis, whether to have children. A senior pre-med student, also engaged, confessed the same worry.

We discussed the carbon footprint of a child in the U.S. compared to a child in the developing world, relative population demographics in richer and poorer countries, whether population control was feasible or advisable. We discussed whether it was fair to bring a child into the world in the flagrant hope that this person might become a heroically gifted chemist or something who would solve the CO2 problem and usher in a golden age.

When my husband and I had our three children in the 1990s, we did not grapple with such weighty matters. I suppose I wondered vaguely about whether to bring a child into a world of pain. But young people these days are asking, perhaps in whispers so quiet they hear them only in their own hearts: am I willing to bring a child into the end of the world?

I realize that probably every generation before us has wondered whether the world was about to end. The signs of the end that Jesus cites in Matthew 24 are pretty much always recognizable. Still, the mechanisms of destruction today are global and already in motion. Survival will require much more than a few global leaders not pushing nuclear buttons. It will require massive, long-term, cooperative effort, the very best of human ingenuity and the human spirit.

Are we up to it, we humans, so infinite in faculties and yet the quintessence of dust? Or is it time to conclude with the Teacher of Ecclesiastes, “All is hevel”? Hevel is the Hebrew word for that which is evanescent, weightless, meaningless. Or, as Hamlet might say, apropos of climate change, “a pestilent congregation of vapors.” Would even our best efforts amount to hevel?

The author Jonathan Franzen published an article last week in The New Yorker in which he called for an end to pretending that we can “solve” the climate crisis. It’s not that we shouldn’t do anything, but rather that we should admit the truth that we’re never going back to the way things were, climate-wise. We’re not going to “win” this.

Franzen’s position is based not only on the most reliable predictions and models but also on his rather pessimistic view of human nature. So the question now, he writes, is where to put our hope and how to shape our actions. What ethical imperatives apply beyond simple, consequential questions of what works? What must we do even if it won’t, in the end, “work”? His answer is that we must do what is right. Set our sights, one might say, on virtue ethics. Act to reconcile and repair, build community, create as many ecological and human spaces of life and shelter as we can. To translate into a term I’ve been exploring lately, we must create refugia.

Much of this work, like it or not, will fall onto young people. I lament the burdens they must bear, the work they must do while fighting a battle against despair. If we want to believe that all is not hevel, if we want them to believe that, then we must all help bear the weight of this time with them.

I worry about my children, the three precious, unique young adults God brought into the world through my husband and me. All the days ordained for them were written in God’s book before one of them came to be. Did we bring them into the end of the world? I don’t know. I pray not.

Thanks to Prof. Webb for the idea to use the image above. Photo credit: Kristi McCluer. Thanks to Dave Koetje for sharing the results of his class survey with me. Thanks to the people at the lunch table for tipping me off to the Franzen essay and for their honest and thoughtful conversation.