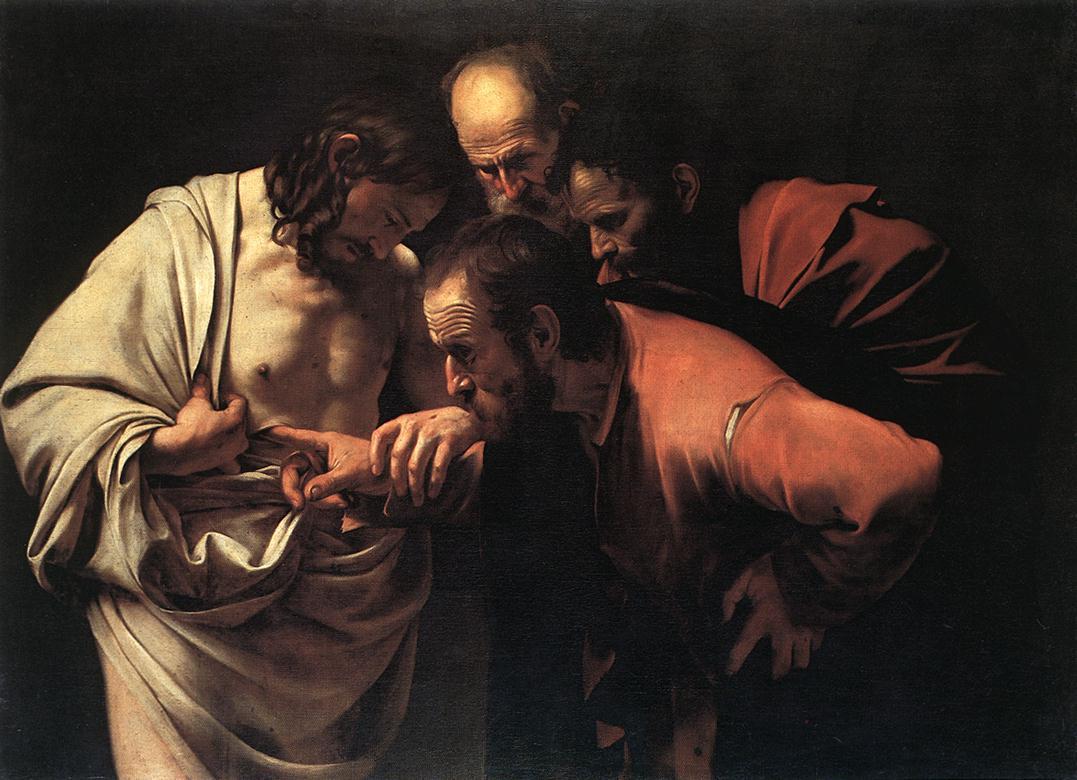 I’ve always liked the story of doubting Thomas. When I wrote this meditation several years ago for Lectionary Homiletics, I finally realized just how important he is.

John 20:24-31 comes round the lectionary circle every year on “Low Sunday,” that anti-climactic day when the entire church staff, having pulled out all the stops for Easter, drags back to church in a state of exhaustion. The trumpets are back in their cases, the lilies are beginning to wilt, the second stringers are in charge of leading worship—and the text of the day brings up the touchy subject of doubt.

In the literary arc of the Gospel of John, however, this text is the climax. Both scholarly and literary reasons argue for Chapter 21 as an appendix, a kind of seaside coda in mezzo piano. The major fortissimo cadence chord sounds in chapter 20:31.

This little pericope resolves the issues of signs and belief that have occupied the gospel writer from the first chapter. Who is this Jesus, and how do we know who he is? John’s magnificent prologue announces immediately that our previous ways of speaking cannot convey an adequate answer. The writer must break through ordinary referential language and use a comprehensive metaphor: Jesus is logos. Throughout the gospel, we see an emphasis on metaphorical thinking. In episode after episode, John depicts Jesus striving to get his listeners to think in new categories. This leap corresponds to the way metaphor works: metaphor combines unlike things to create a “new referential access,”[i] a fresh and enduring means to comprehending something that was previously incomprehensible. In John, this new access is given the shorthand term “belief.”

Unfortunately, very few people make the leap immediately and easily. “The light shines in the darkness but the darkness has not overcome (comprehended, understood) it.” In fact, all of us need prompting. The gospel is everywhere sympathetic with our need for evidence, for signs. It’s true that signs are not enough; some people insist on ignoring them. But signs are necessary, as they jolt us (like metaphor) out of our old perceptions.

The signs that Thomas insists on in verse 25 are very specific to the situation and to the particular truth claim at hand—that Jesus is not dead, but alive. Because of this specificity, Thomas has gone down the ages as the doubter, the empiricist, the fellow who needs material proof. The famous painting by Caravaggio, Doubting Thomas, epitomizes this Thomas-as-empiricist tradition. Jesus is pulling back his robe while Thomas leans in close, his finger buried up to the first knuckle in Jesus’ wound. The other disciples, we notice, are not exactly indifferent. They are crowding in to get their own good look.

We are sometimes told that Thomas’s approach to belief is overly fastidious, second best if not suspiciously over-scientific. If we wish to be truly spiritual, this way of reasoning goes, we will not insist on putting our finger in Jesus’ side. On other occasions, we may hear the opposite view: Thomas takes on the role of the doubter’s hero, the only truly modern disciple. In this case, we’re told that Thomas’s empirical needs are completely valid. After all, Jesus himself validates them, kindly delivering precisely what Thomas demands. In the Caravaggio painting, Jesus’ own hand rests on Thomas’s wrist, guiding his fascinated touch.

In the context of the gospel as a whole, I think we should neither scold nor idolize Thomas. He is not so different from anyone else in this gospel. They all needed signs and proofs, too. People came to believe in Jesus when he demonstrated clairvoyance or healed lifelong disabilities or multiplied loaves and fishes. As for the particular question at hand in Chapter 20—is Jesus alive or not?—the other disciples needed their signs and got them. The beloved disciple saw the empty tomb, Mary Magdalene heard Jesus call her name, the others received his warm breath.

Thomas, therefore, is like all of them and all of us. His second name, Didymus (the twin), perhaps signals that he is of two minds. He is both doubter and believer at once. The two states of mind wrestle inside him, and in that sense he represents us all.

For that reason, I see Jesus’ words in verse 29 not as a scolding dismissal of Thomas, but as a gesture of mercy directed right at the reader. After all, we never walked the streets with Jesus, we have never seen the nail prints. Jesus says here to us, “I know it’s hard to believe when you haven’t seen me as these people could. Blessed are you for accepting the testimony of this writing.”

Seeing is believing—this is the idea (rooted right in the close relationship between the Greek words for “see” and “know”) that the gospel writer persistently deconstructs throughout the gospel. Some who saw did not believe. Even those who saw needed to break through to a new way of thinking in order to believe. Here the writer wishes that those who have not seen might yet believe. This is the purpose of the gospel: “Jesus did many other signs…  But these are written that you might believe.” The document itself becomes testimony, a mediation between sign and belief.

Belief in what, exactly? Often in this gospel, the word belief is used without much precise content. It signals an openness to something new and a trust in the person of Jesus. That was the best the characters in each story could manage in the moment. (John 11:27 is one exception.) But here, for the benefit of the reader, the word belief is followed at last by specific propositional content: “that Jesus is the Christ, the Son of God, and that by believing you may have life in his name.” The content is the result of sustained reflection on the events recorded here.

Thomas is not a counterexample for right belief, then, but a metaphor in his own way. He signals in his passionate insistence how we are to respond to these texts. See the nail marks in these stories; put your finger in these words.