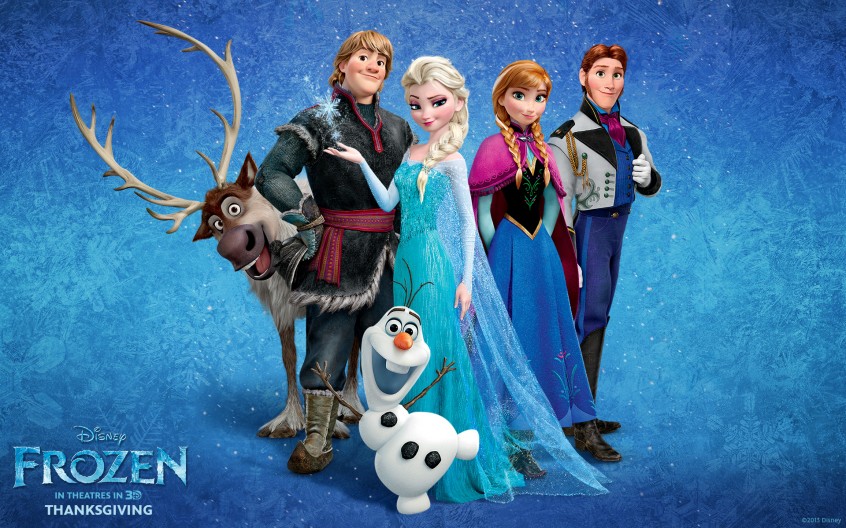 My world lit class this past semester read nine—count ‘em—nine epics (well OK, substantial excerpts). We noticed, to our quiet astonishment, that in some ways not much has changed between, say, The Odyssey and Iron Man. Heroism in the epic mode at the cineplex today is still very much a male-centered affair, and female characters tend to be witchy villains, alluring distractions, damsels in distress, or if you’re lucky, hot-n-sexy sidekicks. The occasional exceptions are remarkable, and I read some fine final papers appreciatively referencing Katniss Everdeen of The Hunger Games trilogy or Hermione Granger of the Harry Potter series.

So with all this on my mind this week, I went to see Disney’s latest animated feature, Frozen. I had heard some vague rumblings about it being a girl-centered feature about sisterly love, but I deliberately did not read anything about it ahead of time. I went in cold—and that will be my last wintery pun, I promise. How would Disney’s animated film team (led by directors Jennifer Lee and Chris Buck) manage this time in the ongoing effort to present female characters who can bring in box office and merchandising green while still standing up to scrutiny from the girl-power brigade?

The Disney princess genre is so fraught with feminist pitfalls that it’s hard to just enjoy the stupid movie. But I resolved to try, and fortunately things got off to a brisk start. Two princess sisters, Elsa and Anna, are growing up in a lonely castle in the Scandinavian fiction-land of Arundelle. The older one, for no apparent reason, has magical power to create snow and ice. She accidentally injures her sister while playing, and from then on, the parents keep the girls separate and enjoin the older to conceal her power. In the course of a three-minute song, we feel the girls’ loneliness, the parents are neatly dispatched by a storm at sea, and the girls grow up. On Elsa’s summer coronation day, Anna falls in love with the first handsome bonehead she meets; asks her sister if she can marry; Elsa refuses and becomes angry; her anger inspires her to lash out and reveal her icy powers; then she runs off, leaving the kingdom encased in a deep winter. It’s hard to regret the weather change, though, when every snow drift and icicle is so breathtakingly gorgeous.

The rest of the story is Anna’s heroic, quip-and-peril-filled attempt to redeem her sister, who is regarded (naturally) as an evil sorceress by everyone else. But before Anna really gets going on her rescue mission, we cut to Elsa’s ice-mountain exile hideaway. Elsa is voiced by Broadway veteran Idina Menzel, and it was at this moment, when Menzel started belting out the film’s show-stopping diva ballad, “Let It Go,” that I finally started to feel something:

It’s time to see what I can do
To test the limits and break through
No right, no wrong, no rules for me,
I’m free…

At this point, the realization hit me: This is not about sisters. Elsa is up on that mountain, free at last from duties and secrets, and she is finally letting her powers rip, creating a magnificent ice palace, an architectural wonder flourishing right out of her fingertips. Unlike with most witchy villainess figures, Elsa’s power is depicted as only obliquely sexual. What’s emphasized in this scene and throughout is her creativity and her ability to alter the world around her. So I’m thinking, Hunh. I bet this story is about female power.

Brooding on that thought, I tried to relax into the visual and musical splendor. The animation is probably the film’s greatest excellence, as the animators find every possible beauty in light and shadow on ice and snow. And the wool! The wool cloaks and tunics are rendered with such delightful texture and Nordic floral detailing, I wanted to reach out and pet them, and I wasn’t even watching in 3D. The soundscape, meanwhile, is just as wonderful as the visuals. The nine original songs, written by husband-and-wife team Robert Lopez and Kristen Anderson-Lopez, felt a little polished and professional Broadway for a fjord, but I was won over by the terrific orchestrations by Christophe Beck and by the performances of Menzel and Kristen Bell (Anna). As for the obligatory Disney-style sidekick gag humor, it was fine. Poor Maximus the horse from Tangled was clearly given a second life as the reindeer, Sven. Frankly, I didn’t know what to do with the doofy, pull-apart snowman, Olaf. I’m sure he’ll make a nice plush toy.

While letting all of this go by, I continued to muse on my theory about the movie’s Jungian-style theme. In fact, I began to suspect that the two sisters were actually two aspects of the same person, two aspects of what it means to be a woman. Elsa learns as a child that she has magical power and that this power can hurt people, even those she loves. So she and her elders both respond with closed doors, closed gates, the classic locked-up maiden motif. Everyone fears her power—no one more than she herself—and as a result she becomes isolated and icy. She cannot rule her kingdom, she can only destroy it. Meanwhile, sister Anna is curious, innocent, feisty, full of romantic hope in every sense. She’s also desperate for love, which is exactly why she falls for Prince Bonehead in one day/silly song (he seems nice, but you’ll see). That desire for love makes her foolish but it also sends her on her quest and keeps her believing in Elsa’s goodness.

In the end, which I won’t reveal, Anna has to sacrifice for Elsa, but Elsa also has to let herself love Anna. Only then can Elsa rule happily, using her powers for public good; and only then can Anna get together with Kristoff. Oh yeah, I haven’t mentioned Kristoff. There is another romantic interest for Anna, but he’s basically an adorable, beefy sidekick until Anna/Elsa get their issues worked out. Moral of the story: power without love is cold, lonely, and destructive; love without power is desperate and vulnerable. A woman needs both.

After I got home, I read around on the web to see what critics and other viewers were saying. Some very much appreciate the focus on the sister bond, especially since that upstages the romantic subplot. Others thought the sister bond was unconvincing—I have to agree with that, but as I say, I don’t think the film is really about sisters. And then we find the usual critique of Disney for its lookalike plucky princess factory. Fair enough. The sisters are of course tiny-waisted, curvy, and beautiful, their faces conforming to the BESM standard (that’s “big eyes, small mouth”—I had to look it up). But wow, the animation is fun to watch.

Another critique had to do with the supposedly antifeminist way screenwriter Jennifer Lee (with Chris Buck and Shane Morris) altered the original Hans Christian Anderson tale on which the film was based, “The Snow Queen.” Well, I went and read the original story, and I have to say, we’re not exactly working with a feminist manifesto here. The original Snow Queen is your basic witch figure who deceives a young boy with false perceptions and draws him away from his family, including his loving sister. The sister, Gerda (who corresponds to Anna in the film), is no Katniss Everdeen or Hermione Granger, although her sweet innocence does endear her to helpful woodland creatures. One critic is right to point out, however, that in the original, Gerda is aided in her quest to find her brother by several wise and interesting older women, every last one of which is removed from the film. The fabulous “robber maiden,” in fact, is turned into good ol’ Kristoff, complete with the robber maiden’s affable reindeer. I don’t mind Kristoff (or the reindeer) but it does seem a shame. Any story about a woman coming into her own power needs female mentor figures. Neither Anna nor Elsa have any mentor figures, female or male. They are on their own. I wonder what that says.

Frozen is a polished piece of work, but has the Disney princess factory produced anything new here? Maybe. It was, I think, a brilliant move to get rid of the boring brother from the original tale and take the flat, conventional witch and turn her into a real character, making this about sister/selves. The result is a plausible exploration of the psychology of female heroism. Male hero stories typically focus on obstacles, enemies, and rivals outside the hero. It makes sense that female heroism has to begin with overcoming very different, inner obstacles: desperation for love and fear of one’s own power.