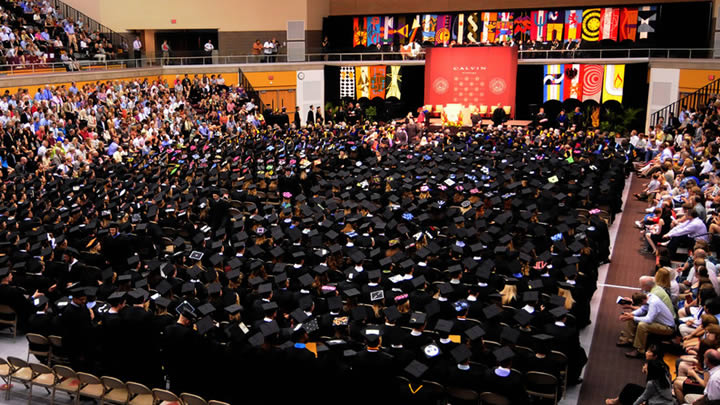 In Their Words: Calvin Seniors on Vocation

A week ago, I was enjoying the splendor of commencement day, saluting some fine young people that Calvin College has now unleashed on the world. (Yes, you’re welcome, world.) This fresh new batch of graduates includes my own daughter! It was my first experience as the parent of a grad, and it’s a good thing academic regalia is roomy, because I felt rather inflated with pride.

While I am especially proud of my own offspring, I am, as usual, proud of our English department graduates, too. As I finished up my grading this week, I found a pile of papers my seniors had written earlier in the semester for the English major senior capstone course. They were asked to reflect for 5-7 pages on their very favorite topic: vocation.

Ha ha. Just kidding. Vocation was not their favorite topic. In fact, they complained that they were sick to death of it after four years of constant hammering. Even so, we enjoyed two days of jolly and therapeutic conversation in class, and then they wrote a set of winsome, insightful, honest reflections. I thought Twelve readers might enjoy a brief tour through the minds of one little sliver of the new generation.

This group of perceptive students confirmed, first of all, that try as we might to promote nuance, “vocation discourse” in a Christian college setting far too often gets collapsed into “the one thing God has planned for you to do but is not revealing—so good luck trying to figure it out.” One student, who had worked as an orientation leader, described how she at first felt a “foolish sense of urgency” about finding her one vocation, which she soon learned how to resist herself and avoid perpetuating among the wide-eyed freshies she toodled around campus. She also noted that imagining vocation as a singular “answer” can lead to spiritual pride: “When vocation becomes about attaining a badge that says, ‘I found God’s plan for me!’ and wearing it proudly on your sweater, that’s when I want to leave the conversation.”

Another student similarly described her numerous stages of “spiritual distress” throughout college prompted by the idea that we each have a singular answer to the vocation question. She remarked, “When students experience vocation as a thing to be discovered, we embark on a painstaking treasure hunt—interspersed with career fairs and Bible studies—only to realize that our legendary singular vocation does not exist.”

Students also had some sharp critiques for the way in which the Christian discourse around vocation so easily slops together with career prep discourse in higher education—so that discovering vocation soon seems virtually equivalent to choosing a major, getting an internship, and getting a job after graduation. I could see the students’ struggle to resist this right in their prose. They wrote eloquently that vocation was about following God, about all of life, yet their reflections succumbed—they noted this happening in their metadiscourse—to the gravitational pull of career prep. “Calvin should emphasize that professional fulfillment is not the quintessence of following God’s will,” recommended our anti-treasure hunt student. An English major/philosophy minor, after noting the temptation for Calvin to send resources toward “practical” and lucrative career majors rather than toward, say, the arts, cautioned that “If we want to talk about vocation seriously, we cannot possibly affirm the values of God while we let money talk.”

We had spent some time in class dissecting Frederick Buechner’s famous dictum: “The place God calls you to is the place where your deep gladness and the world’s deep hunger meet.” Students expressed initial appreciation for this idea, a sense of inspiration and significance. Then things got complicated. What exactly is “the world,” they wondered? And do our lives really have to be all that grand?

Thinking about vocation this way “puts ‘doing God’s work’ in this big important box that can seem so intimidating, or so out of reach, that we never even try to open it,” wrote a student who had been her high school valedictorian. “Can’t I just be allowed to be small?” she wondered. This led her to reflect on community expectations for her and her worry about “wasted potential”: “Am I disappointing to everyone in my hometown, to my family, to my college, to God himself if I let myself be small?”

Another student reflected on how easy it is to define “gladness” and “hunger” in trivial ways—she chased down a ridiculous scenario in which Buechner’s formula eventually led to throwing ninja stars at teenagers in Wal-Mart in order to protect little old ladies.

The class also read the famous essay by Annie Dillard called “Living Like Weasels.” This, too, prompted initial attraction and then a tangle of concerns. “I would love to be a Vocation Romantic,” wrote our orientation leader. “I would love to follow Annie Dillard to the ends of the earth, latched onto an eagle. Soaring and vehemently attached to my vocation, I would sacrifice myself to my One True Calling.” She goes on to explain that, unfortunately for her romantic self, she does not seem to have a one true calling, at least not yet, and maybe never—and that’s fine. A different student wisely observed, “The closest thing I have to a single necessity is God, and as it turns out, the omnipresent Holy Trinity is an impossibly loving entity, and latching onto it means latching onto a lot of other people and their necessities.”

To satirize all of this, one wag wrote a scathingly funny piece of fiction in which a Calvin student named Tyler Vanden Dutch, after meandering aimlessly around Calvin for a year, prays to receive a revelation about his vocation. God comes to him in a flash of light and tells him to go into business. He obeys, and after graduation he spends ten unthrilling years working for a produce company as a buyer. So poor Tyler prays again, begging God to explain why, having following his God-ordained vocation, he’s so unhappy. Well, it turns out there was a mix-up, and Tyler received the divine signals meant for another Calvin student named Tyler Vanden Dyke! The piece ends with God explaining to Tyler #1 that not everyone gets a vocation, so get over it. There are lots of plain old jobs that need to be done, and he’s lucky to have one.

In our discussions and in their written reflections, students were keenly aware that vocation discourse is itself a privilege. I take this as an encouraging sign of Christian maturity, which suggests that their families, home church communities, and the Calvin community are sending the right messages on this point. An international development/English double major showed exceptional self-awareness and maturity when she recounted realizing that her decision to “help people” with her life was itself a sign of her privilege: “Vocation was where my great gladness marked its territory, and the less fortunate had to oblige, to be fed by me, to be taught.” She goes on to contrast Buechner with the work of Amartya Sen, recasting the gladness/hunger calculation so that, as she puts it, vocation could be described as “where your great freedom and the world’s great unfreedom meet.”

So with all this complication and nuance, how do these students make decisions, get through their days? They trust. They think small. They take one day at a time. They live the question. Our failed Vocation Romantic titled her paper “Musings from Bewilderment Boulevard.” “[Y]ou can still move forward while walking in ignorance,” she concludes. “On this road, slight feelings, uncertain urges, and random thoughts weave together to create a life path. It seems to me as if many college students walk down Bewilderment Boulevard, following inclinations and open doors until the pathway becomes a bit clearer. Or maybe it never does—but they keep walking anyway.”

A student who had recovered from a brain tumor before college explains that she has simply learned to “live every day like a mayfly.” She divides vocation into two parts: the career part (which, for her, happens to be mercifully clear) and the whole-life service of God: “Living each moment with God, that is my calling, of the eternal mayfly.”

The student who described her “spiritual distress” has decided that rather than living like a weasel, she’s going to live like a beaver: “the steady laborer who does not grumble or relent, but simply does the day’s work, and does it well.” “Can a person be practical and surrender fully to Christ at the same time?” she asks at the end of her essay. “I believe so. That tension is where I aim to build my future.”

An aspiring fiction writer who admits that his future plans are “loosey goosey” says that he focuses on the present and tries not to worry about the future. He recommends this program: “Speak about plans, but remember that life isn’t a straight path. Speak about careers, but remember that they don’t define our whole being. Speak about vocation, but remember that we don’t understand this idea completely—rest in that fact. I love that I don’t know. If I knew the details of the road I will be walking, I would want to go back to bed and forget everything.”

I thought these were wise words indeed.

I have been myself at times rather cynical about the concept of vocation. Certainly I’ve been critical of it, in print. Having hashed over this topic yet again with some weary seniors, though, I have to admit that talking about vocation yields some beautiful results. I come away determined to continue correcting our flattened and damaging notions about vocation, but also to continue raising it as an area of theological and spiritual reflection.

However fraught, vocation discourse is one way in which we invite one another to think seriously about the meaning of our lives. How beautiful to remind one another that purpose and direction is not all about me, me, me, but about the larger kingdom purposes of God, the gifts given us by grace, and service to others. This gives us each a significance more durable than anything “the world” can offer.

Many thanks to the students quoted here for their wisdom and honesty. I kept you anonymous to protect your privacy. The senior sem group was wonderful all semester, and I’ll miss you all.